“Phoney Baloney” could keep you from unknowingly being victimized by scams 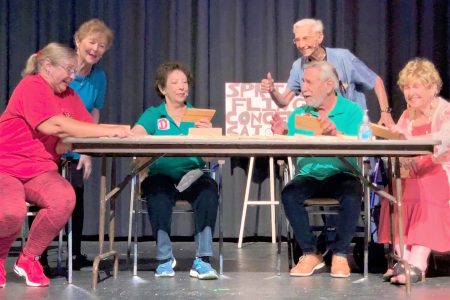 COURTESY PHOTOS
SAGES Theater Inc. actors rehearse for an upcoming presentation of “Phoney Baloney,” a fast-moving comedy with a serious theme. Residents are invited to watch a live-streamed presentation of the play about a group of friends who meet at their community center to share tales of being scammed as a result of simply answering their phones.

“Phoney Baloney” could keep you from unknowingly being victimized by scams

According to AARP statistics, one in 52 seniors falls victim to a scam that robs them of their much-needed financial resources and leaves them reeling when they find out they’ve been duped. In Sun City Center alone, these lost resources amount to more than $1 million dollars annually.

In its continuing efforts to keep folks in the South Shore area from becoming victimized, the Hillsborough County Sheriff’s Office has partnered with the United Methodist Church of Sun City Center, Hillsborough County Consumer Protection Agency and SAGES Theater Inc. to address, in a fun, yet informative way, scams targeting seniors. On March 13, residents are invited to watch the live-streamed presentation of “Phoney Baloney,” a fast-moving comedy play about a group of friends who meet at their community center to share tales of being scammed, as a result of simply answering their phones.

Christine Hamacher, executive director of SAGES Theater Inc., left, and Kelly McGuire, director of “Phoney Baloney,” are bringing the live-streamed production of the play about phone scams to South Shore residents March 13. It can be viewed from 2 to 3:30 p.m. via www.Facebook.com/umc.scc and at www.sccumc.com.

The hour-long play includes scenes on a variety of fraudulent schemes, including the computer tech scam, identity theft scam, grandparents’ scam, sweepstakes scam and romance scam, all of which have duped and continue to fool unsuspecting area residents.

Following the presentation, a panel of experts will interact with audience members during a 15- to 20-minute Q & A session. It will include Hillsborough County Sheriff’s Office Community Resource Deputy Jeff Merry; Eric Olsen, of the Hillsborough County Consumer Protection Agency; and other industry experts. While the play is being presented, viewers can send in questions for the panel, through social media comments at the bottom of the screen.

The entire event will be live-streamed from 2 to 3:30 p.m. via www.Facebook.com/umc.scc and on the church’s website, www.sccumc.com, where folks can view it in the comfort and safety of their homes. It will also be simulcast through the social media accounts of other organizations and filmed for future distribution to additional senior communities. Merry is hoping thousands of residents will watch the play and pass on what they learn to friends and family members.

Despite its serious theme, the comedic way in which it’s presented makes the show delightfully entertaining.

“I want people to view this (play) live, right when it’s happening,” Merry said. “It’s a comedy about a subject that everyone definitely needs to learn about. We all can use a bit of levity in our lives right now.”

“Theater has such emotional power,” she said. “Once people’s emotions are involved, they will remember what they’ve seen and heard. That’s why education with theater is so effective. The whole point is to provoke discussion, to make these topics very personal.”

SAGES (Senior Actors Guild and Education Services) Theater Inc. was founded as an LLC by playwright Linda Goldman in 2016 at the B’nai Israel Temple in Clearwater. It became a nonprofit in 2019, and its “Plays with a Purpose” were born. They are aimed at presenting issues that affect not only seniors but also their entire families. The productions are always a mix of comedy and drama.

“Educational theater is a passion for me now because I’ve seen the success of bringing people together to discuss topics that have stigmas attached to them,” Goldman said. “Aging is not a four-letter word; society as a whole doesn’t seem to honor it. We’re trying to change that perspective by empowering older adults to live their best lives.”

SAGES’ mission is to present these plays in such a way as to engage and entertain older adults, while building awareness about the special challenges they face as they age and providing them with tools to help them address those challenges. The themes address issues like scams, targeting the elderly, fall prevention and the deal-making involved when it’s time to give up the car keys.

Actors ages 50 and older are always given lead roles.

The presentation of “Phoney Baloney,” which was written by Goldman, is very timely. All of the scams included in the play are present day frauds being committed all around us in the community. District 4 Community Service Aides Michelle Mortimer and Debbie Vijil are currently “swamped,” taking and processing local scam reports, Merry said.

“Scammers are very good actors, and we’re fighting fire with fire,” Hamacher said. “If we just can get people to not answer their phones when they don’t know who’s calling and let the calls go to voice mail, we can prevent people from being victimized.”