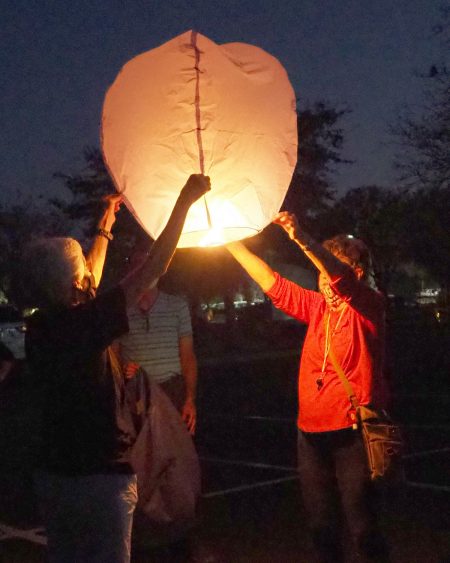 PAT JONES PHOTO
United Methodist Church of Sun City Center volunteers get set to release a prayer lantern after it has expanded from the heat of being lit up. The eco-friendly lantern flies high into the air an then disintegrates into ashes, which fall back down upon the faithful. Numerous lanterns were sent skyward in observance of the church’s CDC-observant Ash Wednesday ceremony this year.

In the days of COVID-19, churches have had to get creative in observing religious celebrations.

To kick off the beginning of Lent this year, the United Methodist Church of Sun City Center held an “illuminating” evening experience Ash Wednesday in lieu of the traditional placing of ashes on foreheads of the faithful.

“During this time of the pandemic, it was a unique way for us to begin the 40 days of Lent, which emphasizes repentance and reconciliation,” said Pat Hill, director of ministries. “The service, led by the Rev. Sam Rorer, included a homily by the church’s four pastors and special music from both Anglo and Spanish musicians. The pastors then led everyone outside to the parking lot, where the prayer lanterns were lit and launched. All 245 people who attended were masked and spaced, following CDC guidelines.”

“I thought it was breathtaking and very emotional, one of the best services I’ve ever attended,” said Grace Bibisi, who attended with her, husband Ray.

“It was fantastic,” he said.

Made of biodegradable tissue paper, the lanterns, once lit, heat up, expand and float skyward.

“They’re environmentally friendly, and once they disintegrate, ashes fall back down,” said Associate Pastor Pam DeDea. “That’s how we honored the imposition of ashes this year.”

After the lanterns were launched, Pastora Yamiley Martinez said a prayer in Spanish, which was followed with a benediction by Rorer. The moment he said, “Amen,” a life-size cross was lit to signify hope and the promise of light to come, Hill said.

“You would not believe how powerful the experience was,” she said. “It truly was an emotional experience.”

Hill brought the idea for the ceremony back from a dinner party she attended where someone began talking about wish lanterns, and she became excited to learn more.

“It was unbelievable, so I came back to the church and presented the idea to our pastors, staff and friends,” she said. “Everyone I told was so excited. It was a perfect way to commemorate Ash Wednesday.

If you’d like to view the launch, the entire service is available at sccumc.com. 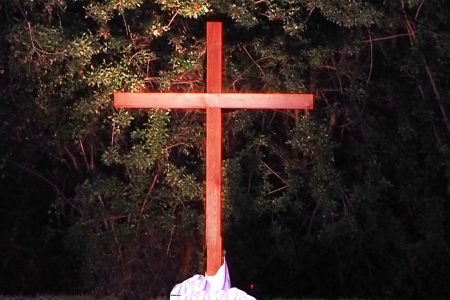 After a benediction at the end of the church’s outdoor Ash Wednesday ceremony, a cross is lit to signify hope and the promise of light to come. 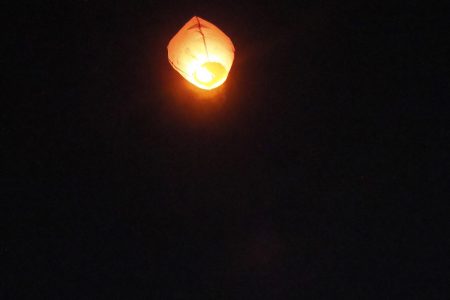 A lighted lantern, filled with the prayers and petitions of the faithful, soars into the sky above the parking lot at the United Methodist Church of Sun City Center during a special Ash Wednesday ceremony Feb. 17.