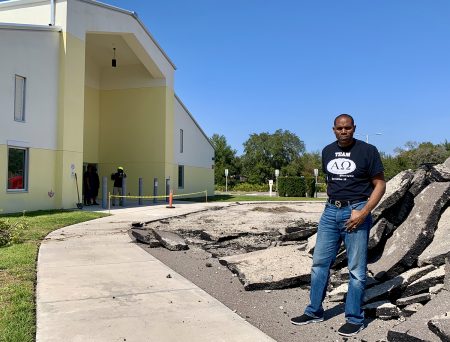 From its humble beginnings in the youth room of a rented church on Dixon Road to its emerging three-story structure on Balm Riverview Drive, Love First Christian Center is making its mark in south Hillsborough County as a large church with a “simple” focus on contemporary, Bible-driven worship.

Under construction at 12847 Balm Riverview Drive is a three-story addition to the 17,000- square-foot building that opened in March 2016 with an 856-seat sanctuary, lobby, office space and children’s ministry classrooms.

Love First Christian Center (LFCC) with new construction is set to expand to roughly 65,000 square feet, with a three-story building that includes a 14,000-square-foot sanctuary. It’s designed to seat 1,500 parishioners at ground level and another 500 on the second-floor mezzanine.

The third floor is earmarked for a “Teen Zone” ministry and has space also for offices, the choir room and for graphic designers and production workers.

Once open, the original sanctuary, connected to the new sanctuary through a shared lobby, will be used as a youth community center and gymnasium and also for outside rentals to community interests.

That’s the word from founding pastor Jomo Cousins, a former National Football League player and business and motivational speaker, whose online and in-person Sunday services, as well as his online morning prayers, are held weekly for LFCC’s more than 2,000 parishioners.

“I know it looks like I’m crazy building a new church in the middle of a pandemic, but this is what God wanted me to do,” said Cousins, who in 2015 learned he had stage three colon cancer as the first building was under construction. 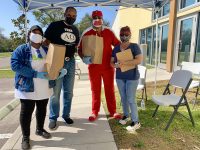 Love First Christian Center runs a food pantry open to the community every Tuesday from 10 a.m. to 2 p.m. At the church Feb. 7, from left, are Cecelia Gordon, Senior Pastor Jomo Cousins, Byron Huffman and Mila Bowen.

Chalking up that “challenging season” and its success to just “another God story,” Cousins said the latest round of construction is necessary to meet the needs of the fast-growing south County community.

“Every direction you go from here you find new construction,” Cousins said, in an interview at the church, which neighbors the 785-acre Panther Trace community and its reported 2,000 families. Just over five miles away is the County’s largest public school, Jule F. Sumner, which opened in 2020 with a capacity to house 2,500 students.

Riding the tailwinds of that growth is Love First Christian, which Cousins said has been blessed since its beginnings.

He noted many such examples, including his first-ever service on Dixon Road, which he said drew 13 parishioners and a $3,600 offering check, which included a note from a former business colleague that read, “We believe in you.”

The church for seven years received free offering envelopes from a company owned by a woman Cousins said he had met while working as a substitute teacher in Orlando. A UPS retailer donated printing of the Sunday bulletin. Someone else donated a computer.

And when it came time to buy the 10-plus-acre parcel off Balm Riverview Road, Cousins said he negotiated down the asking price from $2.1 million to $600,000 in several steps, all the time saying he had a set amount of cash to work with.

“God just kept slapping me with it,” Cousins said, of the many positive steps along the way. “The dominoes just kept falling.”

Witness to that growth is 21-year-old Jomo Cousins Jr., who, with his father at the church earlier this month, watched construction underway.

“I’m still mind-blown,” the younger Cousins said. “I never saw this. I thought [preaching] was a little thing [my father] did on the side. But he had his calling. God guided him to where he is today, and I am very inspired.”

History continues to evolve for Love First and its team of three pastors, four staff members and 10 ministry leaders. Serving also as a senior pastor with Cousins is his wife Charmaine.

Church ministries include those for men, women, children, teens, students, singles, couples, seniors and “young ladies of purpose.” Volunteerism is strong as well, including LFCC Outreach for community service and a food pantry open to the community every Tuesday, from 10 a.m. to 2 p.m.

Life University and virtual group programs include the Art of Parenting, the Art of Marriage, Divorce Care, Grief Share, Financial Stewardship, Getting Past the Past and support groups for dementia caregivers and those with autoimmune challenges.

For more on Love First Christian Center and its offerings and services, visit www.lfcc.tv or call: 813-671-2009. 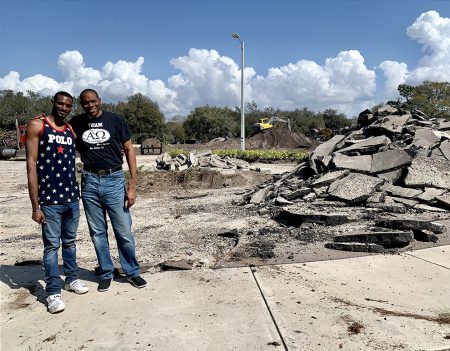