No helmets, no shoulder pads, no hitting, no tackling

Head Coach Travis Combs is preparing for his second season at the helm of an up-and-coming girls high school sport at Lennard High in Ruskin — Flag Football. 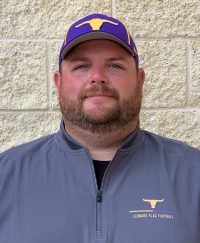 Optimistically, Combs says, “I think we have a lot of talent on this football team — both junior varsity and varsity. We just have to come together and commit and sacrifice for one another.

“Our goal is to win a state title,” says Combs exhibiting no poor-mouthing coach-talk. “We are showing up everyday at practice with championship effort, with a championship process!”

Combs is quick to note that the Lady Longhorns “have put in a lot of work this offseason. Our offseason team entered every tournament we could find, playing in 18 games.”

The pre-season agenda included the NFL Experience at the Super Bowl in Tampa earlier this month. The Lennard squad not only reveled in the special invitation but continued to develop as a contending team despite losing both ends of a doubleheader to a pair of the state’s best teams.

Combs goes on to explain, “Anytime you’re starting a freshman QB (Abby Elwell) on varsity, you can probably expect a learning curve, but Abby has started 12 games this offseason, so she is really like a sophomore. She understands her job is to get the playmakers the ball. I have all the confidence in the world that Abby can get the job done.”

Combs first season last year was cut short by COVID-19. “Last season, my first as Lennard’s head coach, we were 4-1,” says the coach. “We beat rival East Bay for the first time in school history, 13-0, after losing 11 games to them. Also, we beat state-ranked Jefferson High, 12-6, in overtime. It was the first time in school history beating a state-ranked opponent. I had a lot of optimism for our 2020 team last season. It was our foundational team, and we put a lot of work in that offseason. Unfortunately, our season was cut short due to covid-19.”

Currently he is attending HCC and plans to transfer to USF this fall to get a bachelor’s degree in special education. In addition to his coaching duties at Lennard, Combs is an entrepreneur and is self employed. He owns two local businesses: Lawn Barbers Inc. and Xtra Clean Cans LLC.

Combs graduated from East Bay High some 14 years ago where he played football for the Indians, guard on offense and tackle on defense. It was not flag football; it was bruising, violent, with full pads rock ’em, sock ’em tackle football.

“I hope I can instill some work ethic and mental toughness into the kids I coach because my coaches instilled that in me, and it really helped me through the adversity I have had in my life and made me into the person I am today,” said Combs, discussing goals beyond winning and losing.

As for flag football itself, it is a relatively new sport, sanctioned for girls in Florida high schools since 2003. If you have not figured it out by now, there is no tackling. Players grab a flag attached to an opponent’s waist instead of knocking her to the ground or merely touching. Another big difference is fewer players — seven on defense and seven on offense. Flag football evolved from male soldiers engaging in football as a recreational sport on military bases during WWII but sustaining one injury after another. To avoid physical contact and injury in an activity that had no helmets or shoulder pads, the top brass mandated the change to using flags attached to the waist. Fast forward and with legal requirements in the mid-1970s that required high school sports be made available to females, flag football continues its rapid development in Florida high schools, a pioneer, and the first state to sanction the sport at the high school level.