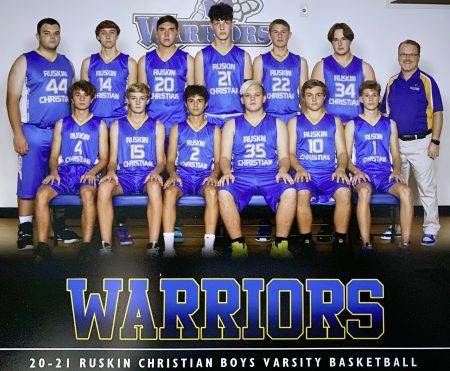 It is not the largest school. They are not the biggest players. But Ruskin Christian School boys basketball is having the biggest year of all high schools in the South Shore area.

Last week, under its new head coach, Paul Northrop, the RCS team walloped Gulf Coast Heat in Sarasota 71-54, forging a 17-1 worksheet. The Warriors, based on West College Avenue in Ruskin, look to add to their almost-perfect record this week. On Monday and Tuesday this week, the private-school Warriors played squads they have previously demolished. Then, to wrap up what promises to be a winning week, on Friday evening, Jan. 29, RCS hosts Central Baptist of Brandon.

Northrop’s Warriors are offensive minded. RCS has tallied 1,224 points through its first 18 games, losing only to Grace Christian 60-53 in Valrico a couple of weeks ago. On defense, the Warriors have yielded only 728 points prior to this week’s action.

After a road game at Palm Grove Christian Feb. 2, RCS will start post-season play. According to RCS Athletic Director Mike Melone, the Warriors are expected to have a first-round bye. Melone anticipates that RCS will open action in the Florida Western Conference play-offs Tuesday, Feb. 9, at home.

With its winning record, RCS is obviously receiving contributions from everyone on the squad. A trio of seniors is providing the leadership with strong support from several underclassmen. Senior Caleb Statham is scoring at a 19 points per game clip. Seniors Gino Titus and Trent Lewis have been keys on offense and defense. Aiding the seniors are junior Sam Tuch and freshmen Efraim Marvin, Hayden Jordan and Charles Lewis.

Poets invited to share messages of hope, inspiration in contest for cash