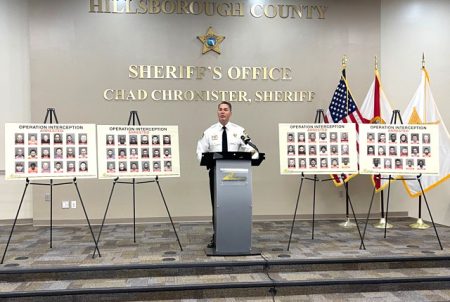 The 55th Super Bowl game is scheduled to kick off Sunday, Feb. 7, at Raymond James Stadium in Tampa, and similar stings are expected in the days leading up to and through Super Bowl revelry.

“We know from past experiences with major sporting events that there will be some who travel for the exclusive purpose of taking advantage of women and children,” Chronister said, at the Jan. 11 press conference for Operation Interception, the human trafficking bust that led to dozens of arrests.

“I want to make it very clear,” Chronister added. “If you are planning to enage in the sexual exploitation of others, I’m urging you to think twice. We will find you, and you will be arrested.”

In all, 71 men, ages 20 to 62, were arrested and charged with human trafficking. They included active-duty military members, construction workers, local business owners, and a firefighter, banker and Christian school teacher. Included as well were two registered sex offenders.

“All of these men have one thing in common,” Chronister said. “They did not care if the women they were going to have sex with were being exploited or forced to sell their bodies against their will.”

According to County officials, Florida ranks third in the nation in the number of calls to the National Human Trafficking Hotline, with the Tampa Bay area serving as a hub for human trafficking.

“The reality is no one willingly chooses to enter the world of sexual exploitation,” Chronister said. “We have found that in many cases these individuals suffer from some type of victimization of rape or suffer some type of substance abuse.”

The Hillsborough County Board of County Commissioners at its Jan. 6 meeting issued a proclamation declaring January as Human Trafficking Awareness Month.

The document notes that county officials, in partnership with Redefining Refuge, a nonprofit in Tampa, works to increase awareness of the sex industry trade, to secure its eradication and to help victims become victors.

“Hillsborough County has been steadfast in its efforts to combat and win the war against human trafficking,” said District 7 Commissioner Kimberly Overman.

Lynn Gray, chair of the Hillsborough County School Board, said in the fight against human trafficking, it’s important for parents to pay attention to the people their children talk to online.

“The more we talk about things we never used to talk about, the more awareness it will have,” Gray said, “and the more we can protect children as the days go on.”

The National Human Trafficking Hotline can be reached at 888-373-7888. Locally visit CAHT-SouthShore (Campaign Against Human Trafficking) at sccblueheart.org and RedefiningRefuge.org for more about the specialized nonprofit service provider and advocacy agency for sexually exploited and trafficked youth.