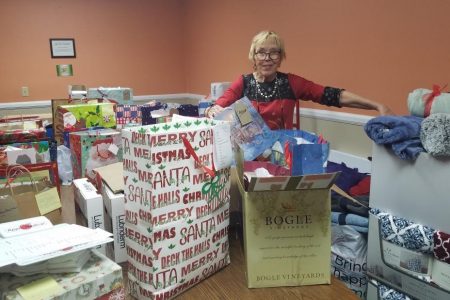 COURTESY PHOTOS
Lynne Conlan, executive director of the South Hillsborough Chamber of Commerce, stands among some of the gifts generously donated by the community for isolated or lonely seniors for the Giving Tree promotion in December.

As a result of the Giving Tree promotion in December, ambassadors of the South Hillsborough Chamber of Commerce and residents of the greater Sun City Center community brought Christmas cheer to scores of seniors in local assisted living/skilled nursing facilities. This effort certainly enhanced the Christmas spirit for everyone involved.

About 60 Palm Garden residents, who for various reasons wouldn’t have received a Christmas gift this year, were given gift bags chock full of wrapped items they needed but might not have been able to afford.

“We were blown away by the support of the community and the gifts we received,” said Brian Bentz, Palm Garden’s executive director. “There were bags for both men and women, which made everyone feel loved and cared for. It was such a wonderful way to lift people up and spread cheer through the holidays.”

“I couldn’t believe how much there was,” she said. “I thought we would have one gift per person. It was just amazing how much thought was put into each gift bag.

“For complete strangers to have been so generous at Christmastime was both heartwarming and appreciated,” she continued, adding that the residents who received the bags were completely surprised. “They didn’t know it was coming.”

“We told our residents these were gifts from people in the community who loved them,” she said. “In light of COVID restrictions, they were really bummed this year, and their Christmas spirit was down. Receiving these gifts meant so much to them. It brought them to life.”

Brian Bower, of Edward Jones, and Connie Lesko, of Freedom Plaza’s Retired Officers Corp., sit on the tailgate of his truck before wrapping and distributing some of the Giving Tree gifts to an area assisted living/skilled nursing facility.

Prospective donors took tags from the chamber’s holiday Giving Tree and purchased items for the man or woman whose first name was on it. They received a suggested gift list of inexpensive items like hand or body lotions, after shave, snacks and socks. But many took matters into their own hands and got highly creative. They turned in things like homemade throw pillows, sweaters, vests, watches and shawls.

“An anonymous donor even brought in two cases of beautiful lap blankets and two cases of moisturizer,” Lesko said. “He called and left a message that he might need such services one day.”

The chamber’s board room was completely overrun with gifts piled everywhere, Conlan said. “There were so many blankets. It was awesome.

“I’m not surprised at the community’s participation,” she continued. “Our residents are always so generous, so giving. All the community ever needs is to be made aware, and whatever the need, it’s done.”

Lesko, whom Conlan called the “head elf,” has already said she’d love to do the Giving Tree again this December.

“It was one of the most, if not the most, fulfilling things I’ve ever participated in over the holidays,” she said.