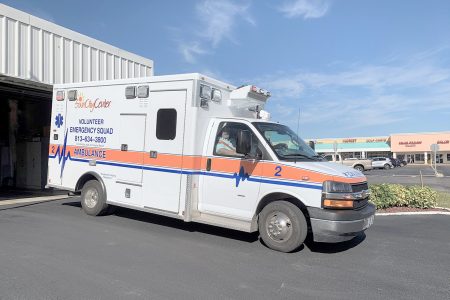 ROBIN WATT PHOTO
The Sun City Center Emergency Squad will be making a transport change during January or February to address an ongoing shortage of ambulance crew volunteers. Whenever only one ambulance is available, patients will only be taken to South Bay Hospital, St. Joseph Hospital South, TGH Brandon Healthplex or Brandon Regional’s ER 24/7 in Riverview.

Over its 56-year history, the all-volunteer Sun City Center Emergency Squad has always taken patients to their hospital of choice, except in the case of life-threatening emergencies. In those situations, its ambulances head to the closest emergency room at South Bay Hospital, said Robin Watt, assistant chief/public relations.

But with a critical shortage of ambulance volunteers this year, the squad has frequently had only one ambulance on duty all day long, which has prompted the decision by Chief Mike Bardell and its board to make a permanent change in its transport policy.

But whenever there aren’t enough people to fill an ambulance crew, the 9 a.m. to 5 p.m. shift has to be eliminated. When this happens, only one ambulance is available all day long.

“We have some volunteers who are currently working extra shifts to provide continuous ambulance service,” Watt said. “We desperately need more volunteers to provide the level of service this community needs and deserves.”

Here’s the issue. When a patient asks to go to Tampa General Hospital, James A. Haley Veterans Hospital or any of a number of hospitals outside of the squad’s immediate area, its ambulance turnaround times are approximately three hours. If only one ambulance is working, callers needing assistance have to be referred to Hillsborough County Fire Rescue or another ambulance service, both of which residents must pay for. Either that, or they must wait until the squad’s engaged ambulance returns.

Because of this and after careful consideration, the squad is making the following policy change to address the issue.

Sometime during January or February, whenever a single ambulance is working, the squad will begin transporting patients to one of only four area health care facilities: South Bay Hospital, St. Joseph’s Hospital South, TGH Brandon Healthplex or Brandon Regional Hospital’s freestanding ER 24/7 on U.S. 301 in Riverview.

“The basic reason for this change is time,” Bardell said, noting he wants to get word out to the public ahead of implementing the change. “We figure we’ve included most of the facilities people would want to go to and taking them there will reduce ambulance turnaround to two hours or less, enabling us to serve more of our residents.”

Serving on an ambulance crew is a truly meaningful and gratifying way of helping neighbors during their time of need. Anyone 18 years of age or older is invited to learn more at the squad’s next recruiting meeting scheduled for Jan. 13 at 6 p.m. in its Training Building, 124 Pebble Beach Blvd. S. Free uniforms and training are provided.

Questions or comments on the upcoming transport policy change can be emailed to info@scc-ems.us.