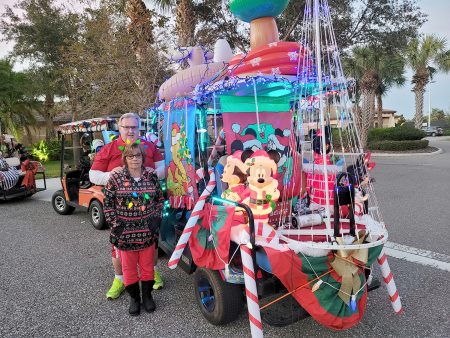 You could hear it before you could see it. On the evening of December 21 at Valencia Lakes, 25 gaily decorated golf carts threaded their way along their route spreading cheer. Golf Cart Club President Rodney Davis said that, because the route included every street, residents had only to step out their front door to enjoy the season’s holiday spirit. It was the 8th annual Christmas parade at the 55+ Wimauma complex.

There was one prize for the best decorated golf cart and that went to Keith and Marge Cotter for their elaborate Disney-theme, complete with colorful lights. It was a “traveling pillow,” bearing the signatures of previous winners. The Cotters have participated in all the Christmas parades since moving to the complex three years ago. They won their first year, too.

Davis said that this event, along with the Fourth of July and Halloween parades, gave residents a much-needed break from their COVID-19 stress. The July parade brought out 37 participants; the Halloween parade, 47. 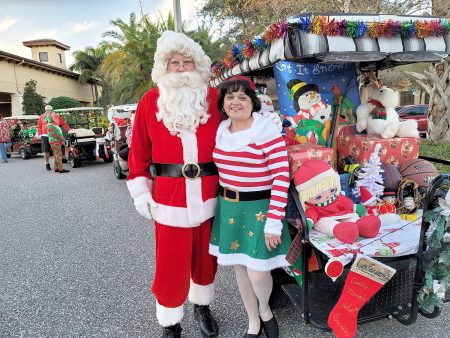 Santa (a.k.a. John Columbia) filled a cart with goodies and brought along wife Maria. This was Columbia’s second year as the Valencia Lakes Santa, but his Santa experience spans three decades. 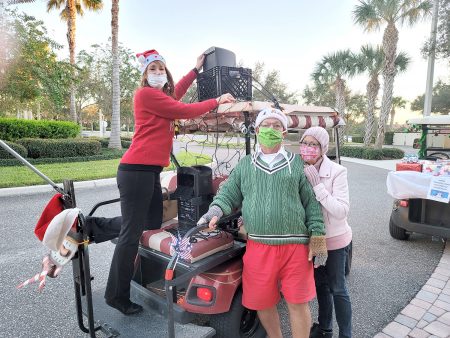