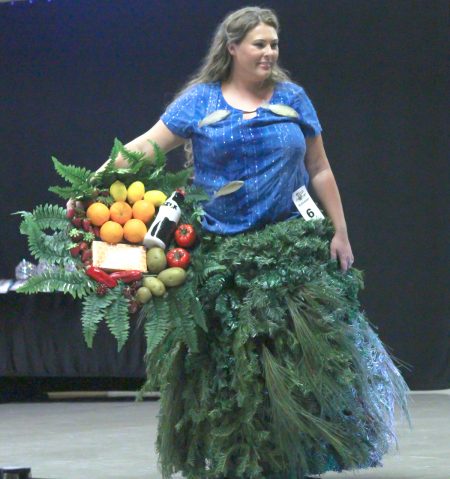 Wimauma resident Sondra Lunquist competes on stage in the In the State Fashionista optional category of the America’s National Miss Agribusiness competition, Nov. 22 in Crestview, in which she was required to make an outfit representing Florida agriculture and wear it onstage. She won.

Wimauma resident Sondra Lunquist won top honors in her age group Nov. 22 at the recent America’s National Miss Agribusiness Pageant in Crestview. She was among 12 Florida women who took home titles in the competition. 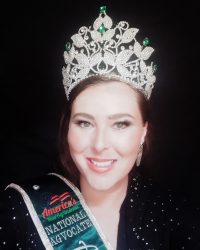 Named America’s National Miss Agribusiness, Lunquist won a custom crown, rhinestone-bordered sash, goodie bag and medallions, after competing in two required categories – formal wear and personal introduction, where she talked for one minute with the judges and audience about herself and why she would be a good fit. She also won all four of the optional categories in which she competed: interview, Western wear, essay and state fashionista.

In the state fashionista category, Lunquist was required to make an outfit representing Florida agriculture and wear it onstage. The colorful and highly creative dress she came up with included all aspects of Florida agribusiness, as described by the competition’s MC, who said the following while reading a description Lundquist had written:

“The sunshine state is known as “the fishing capital of the world,” because it’s a multi-billion-dollar-a-year industry.” “Our five-million acres of forests help produce more than 5,000 products we use in our daily lives. Florida is the top producer of fresh market tomatoes and has more than 500 acres dedicated to lemons. Three different essential oils can be extracted from the leaves, stems and fruit of (our) orange trees. (We) have over 20,000 acres of potato crops, are the third largest honey producer in the country and have more than 100,000 dairy cows. Hundreds of varieties of peppers, from sweet to spicy, can be grown here, and it’s the second largest producer of strawberries (in the nation) and leads it in cultivated ferns (used in) beautiful bouquets.”

In an additional category, Lunquist competed against 19 women of all ages for the title of Agvocate. For the next two years, she will travel the state, talking with politicians, going to trade shows and speaking with farmers, ranchers and other groups, like FFA, 4H and community garden clubs, learning about their issues and interests. Last June, she was elected president of the Riverview Garden Club.

Lunquist, 33, is a retired pantologist, a self-described “jack of all trades.” She was born and raised on a horse farm with a small orchard in the state of Washington.

“I loved getting dirt under my nails and watching things grow,” she said. “It’s a truly fun way of life. It’s hard but very rewarding.”

Lunquist graduated from Green River Community College with an associate degree in radio broadcasting in 2005. She’s an avid gardener and 18-time American Morgan horse champion, who worked on the family farm and sold heavy farm equipment over the years.

She moved to Florida from Enumclaw three years ago with her husband, Michael, who works as a technical communicator for Caterpillar. When he retires, she said, her goal is to buy a horse farm and raise show horses.

While Lunquist was surfing the Internet one day, the contest “just showed up” as targeted advertising on Facebook, she said. It piqued her interest, so she researched further. Last February, she entered to represent Hillsborough County and won that title. Then, in July, she won the Florida state title, before going on to the national contest and capturing the title of America’s National Miss Agribusiness in the “Elegantness” group of seven women, ages 30 to 49.

“I am still shocked,” she said of her win. “There were some amazing women who competed.”

Holiday gift ideas for the gardeners in your life

Christmas outings around the Bay