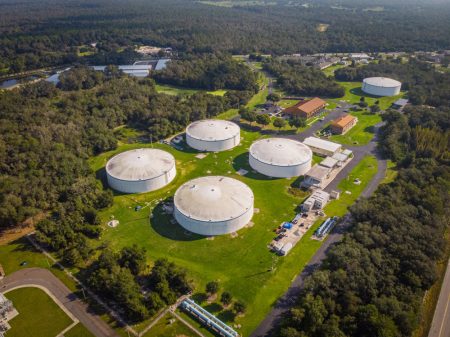 Photo Credit: Hillsborough County
Aerial view of the drinking water treatment plant in the Lithia/FishHawk area, similar to the potential facility planned for the Balm area.

To keep up with the high demand for drinking water in fast-growing south Hillsborough County, County officials, in an ironic twist, purchased property that prevented the development of a large subdivision consisting of some 1,600 homes.

Instead, that land has been set aside for a drinking water facility to meet short- and long-term service demands in the South County urban service area. Residents are being asked to participate in the South County Drinking Water Facility Public Engagement Opportunity to learn more about the project and to cast their views on the siting of the proposed facility.

The deadline to give feedback is Monday, Nov. 23.

According to County officials, the facility could be a drinking water treatment plant or a drinking water transmission station. For this intention, Hillsborough County Commissioners on Oct. 7 approved the purchase of a 330-acre parcel between Balm Riverview and Balm Boyette roads. Also part of the deal is some adjacent Jan K. Platt Environmental Lands Acquisition and Protection Program (ELAPP) property, “as part of a settlement agreement that prevented development of a large subdivision on the property.” The future County-owned land is south of the Balm Boyette Scrub Preserve in Balm.

“The facility would require few employees to operate and should have little impact on the area or traffic after construction,” County officials report in the project’s online presentation. “The site will include a large, 500-foot-wide nature area surrounding the facility, planted with pine trees to help restore the land and provide a buffer between the facility structures and neighboring properties.”

Officials say with its proximity to the urban service area, the proposed site would save taxpayers more than $20 million in construction costs compared to other similarly situated sites. The larger treatment facility could be similar in size and design to the County’s Lithia Water Treatment Plant on Lithia Pinecrest Road in the FishHawk area.

This pipeline project is to be constructed before the drinking water facility, which is scheduled to commence in 2026. County officials expect to complete the land acquisition in 2021. Additional public engagement will be sought before the facility is designed. According to county officials, “The final site design may include recreational or environmental features, such as trails, due to the site’s close proximity to the Balm Boyette Scrub and other ELAPP acquired property.” Construction is expected to take up to two years to complete.

Meanwhile, in the works is a $12 million drinking water booster pump station to extend along Balm-Riverview Road adjacent to the new facility.