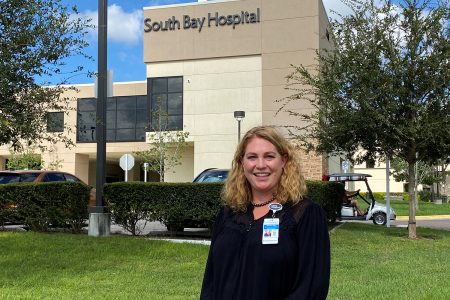 Sheldon Barr, 50, is the new chief executive officer of South Bay Hospital in Sun City Center. Her first day on the job was Nov. 9, and she’s roaring to make a difference for the hospital, its staff and the community.

“There’s a palpable excitement about her being here,” said Lesley Lykins, South Bay Hospital director of public relations, marketing, communications and volunteer services. “Sheldon will be spearheading increased growth at our hospital, especially in respect to the services we will provide the community. And with her more than two decades of nursing and healthcare administration, she will provide an important perspective to all staff members and providers that reflects an understanding of what each of them does.”

“I am so humbled and honored to be here,” Barr said. “My goal is to expand South Bay Hospital and its services to meet the growing needs of Sun City Center and the surrounding communities. I love being part of a community hospital, being involved in the community itself and sharing the mission of HCA hospitals.”

Originally from Johnson City in east Tennessee, Barr grew up between Virginia and Tennessee. She comes from a family of healthcare providers who include nurses, a vascular surgeon and, even, a dentist. So it was natural for her to follow suit.

“I have always wanted to help and care for people,” she said. “Throughout my healthcare journey, I’ve stayed close to both patients and the nurses I’ve worked with. I was actually married by one of my cardiac transplant patients who is still alive today after 20 years.”

Immediately prior to joining South Bay Hospital, Barr spent two years as chief operating officer at HCA Capital Division’s Chippenham Hospital in Richmond, Va., a 466-bed Level I trauma center on a campus of Chippenham & Johnston-Willis Hospitals. Before that, she was COO for two-and-a half years at Portsmouth Regional Hospital, a 209-bed Level II trauma center in Portsmouth, N. H.

Barr earned Bachelor of Science and Master of Science degrees in nursing from the University of Virginia and, later, a second master’s in business administration from Western Governor’s University. She has been with HCA Healthcare since 1994, starting as a nurse in the Cardiac Surgery Intensive Care Unit at HCA Virginia’s Henrico Doctors’ Hospital in Richmond.

The new CEO holds a Six Sigma green belt in healthcare from Villanova University, a certification that developed and strengthened her skills in analytical problem-solving, critical thinking and process-improvement, which will help her at South Bay Hospital to meet the needs of patients, caregivers and providers.

Barr’s commitment to the local community in Richmond was acknowledged through her earning the Frist Humanitarian Award in 2003. She has every intention of being equally involved with the community here.

She will soon be out and about meeting members of the community and offering a virtual lecture series, video presentations or speaking personally with organizations like the local Rotary clubs, chambers of commerce, Sun City Center Emergency Squad and more.

“I’m open to engaging with any community partners who will have me,” she said.

Barr and her husband Steve are temporarily staying in Bradenton until they close on their house in Apollo Beach next month. They have five adult children between them and five grandchildren, including two sets of toddler-aged twins.

In her spare time, Barr enjoys riding a Peloton bike, paddle boarding, doing yoga and reading both fiction and nonfiction.