True to her nature, Penny Smith works quietly behind the scenes promoting meaningful causes. She never looks for accolades or a pat on the back; she simply wants to make a difference.

Penny Smith, is shown here with her husband, John, whom she married in 1992. They co-owned three H&R Block franchises in the South Shore area from 2006 to 2017 and have since retired. Both volunteer at and support numerous charities.

The 67-year-old Wimauma resident may be officially “retired,” but she now works as president of the board of the Critter Adoption and Rescue Effort no kill shelter, where she spearheads its New Building Project, writes grant proposals and seeks donations to fund its construction.

“I do it because of the need,” Smith said. “It’s always so much more than there are people available or willing to fill it. I think one of our purposes in life is to help those in need move forward. It’s not only about ourselves.

“If we’re able, we should find a way to volunteer.”

Smith was born in Brackley, England, and grew up in Northamptonshire, a county in the East Midlands of the country. At age 17, she attended nursing school but left to get married. In 1978, she emigrated to Polk County with her now ex-husband and their daughter, Johanna. She married Navy veteran John Smith, her current husband, in 1992.

In 1994, she joined H&R Block as a tax preparer, spent eight years in Winter Haven and then moved to west Texas. In 2003, she and John relocated to Seattle for three years. They moved back to Florida in 2006, when they bought H&R Block franchises in Ruskin, Apollo Beach and Sun City Center. (The Smiths sold them back to the company in 2017.)

Even while working fulltime, Penny Smith always found ways to serve others. On the job, she enjoyed helping her clients.

“Doing taxes was almost like being a detective in finding deductions and credits to get people the most they were entitled to,” she said. “I also donated my time and expertise to negotiate with the IRS for folks with large tax bills.”

Throughout her career, Smith has volunteered and provided financial assistance to a variety on nonprofit groups. 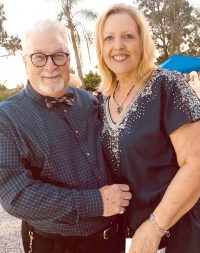 COURTESY PHOTOS
Wimauma resident Penny Smith has spent most of her adult life serving those in need. She feels volunteering, if one is able, is an important purpose in life.

While living in Polk County in the late 1990s, she organized teams and participated in the Relay for Life walks in Winter Haven, Light the Night for Leukemia Walk in Lakeland area and Paint Your Heart Out Winter Haven.

Here in South Shore, she served two years on the board of the Mary & Martha House shelter for battered women; was a three-year member of 100 Women Who Care – South Shore; financially supported PCAT Literacy Ministries; donated books and supplies to local ESOL (English speakers of other language) students; gave several scholarships; and donated computers to migrant students.

Smith also has decorated and donated Christmas trees for the Friends of the SouthShore Regional Library’s Festival of Trees fundraiser for the past 10 years, served three years as treasurer of the Firehouse Cultural Center board, and sponsored Toys for Tots boxes at all three H&R Block locations.

Perhaps her greatest passion of all has been serving the past five years on the C.A.R.E. board. She has been president for the past two.

“A friend actually recommended me to the board,” Smith said. “I’ve always had dogs and cats, and I was looking for an opportunity to help animals. I wanted to play a role in helping the shelter rescue and rehome as many as I could, and I felt my business background might contribute.”

In 2018, Smith envisioned and proposed construction of a new facility to replace the aging shelter C.A.R.E. had outgrown. In May, the nonprofit organization kicked off a campaign in Sun City Center to build a larger, more modern shelter on its 3-acre property in Ruskin. The goal is to improve its operational efficiencies and increase the number of animals the shelter could accept and, subsequently, place in permanent homes.

Now as its outgoing president, she plans to stay on as facilitator of the New Building Project and continue raising money for it. Thus far, she’s helped bring in $1.5 million of the projected $3 million cost.

Phyllis Gannon and Beth Stein both worked with Smith on the C.A.R.E. board. “Penny definitely has a good heart,” said Gannon, who’s known her about 10 years. “What most impresses me about her is how she gets things done. If she’s passionate about something, nothing stops her.”

Stein agrees. “I met Penny though the Firehouse Cultural Center and immediately knew what a driven professional she was,” she said. “She has the ability to see long range, and through her personal involvement with C.A.R.E., she’s making the vision of a new shelter a reality. She’s a workhorse for gathering community support and making people aware of our mission.”

Her friends Larry Brooks and Melanie Davis are also big fans. “She’s a great lady,” Brooks said. “She’s always been very active in the community. Any accolades that come her way, she’s earned. I can’t say enough about her.”

Davis has known Smith since 2008, and she feels the same way. “Besides having a big heart, Penny is one of the smartest people I know. She leads with both her head and heart,” she said. “Any time I need advice, I know I can call her. I’ve never heard anything but praise for her, and it’s well deserved. I want to be like her when I grow up.”