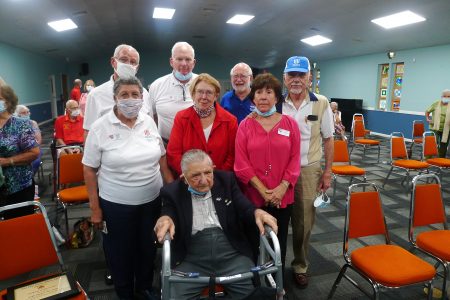 Ed Socha, center, is pictured with friends at Trinity Baptist Church during an event to wish him farewell as he plans to relocate to Longmount, Colorado.

On Nov. 8 at the Trinity Baptist Church, a departure event was held to wish Ed Socha farewell. He is moving to Longmount, Colorado, where he has relatives. All interested residents, who know and love him, were invited to wish him a fond farewell. Everyone who knows Socha is well aware of his military back-ground and many contributions to our nation, to Sun City Center (SCC) and to our Military Officers Association of America (MOAA) Chapter. He was one of the founders of the SCC MOAA chapter.

Socha was standing on the USS Maryland flag bridge battle station on Dec. 7, 1941, as the USS Oklahoma tied up next to his ship, took several Japanese torpedoes to its hull and sank in Pearl Harbor within minutes. That experience distinguishes him as a true survivor of Pearl Harbor and one of our country’s first World War II veterans.

Socha was born in 1921 in the Adirondacks town of High-market, N.Y. He graduated from Niagara Falls Sr. High School in 1939 and enlisted in the US Navy in September of that year. He attended boot camp in Newport, R.I., and Fleet School in San Diego. He was assigned as personal secretary to Commander Battleships.

He was commissioned an ensign on Guadalcanal in 1944. He underwent Scout and Raider training in Ft. Pierce, Fla. He then flew from India to inland China over “The Hump” and participated in a historic six-week survey of the Yangtze River in the spring of 1945. Socha established a training camp for Chinese commandos just before the war ended in August 1945. He was presented with the Trident Pin by representatives of Seal Team 1 and 2 from MacDill AFB in March 2017 for his participation in that operation.

Socha was an executive assistant with the Joint Chiefs of Staff at the Pentagon on the day of President Kennedy’s assassination. He retired from the US Navy in 1966 at the Military Sea Transportation Service in Brooklyn, N.Y., with the rank of Commander.

In the private sector Socha worked for a Combustion Engineering Company in Atlanta, Houston and Bloomfield, NJ. He moved to Sun City Center in 1987 and has been active in the SCC community, serving as a director of the SCC Chapter of MOAA for five years and was its president in 1994. He is a life member of the Pearl Harbor Survivors Association and has served on the board of the Retired Officers Corporation.as well as serving as a trustee of the Military Family Support Trust organization. He also completed 21 years of service with the volunteer Security Patrol.

Socha was invited to take one of the Honor Flights conducted by a non-profit organization dedicated to transporting as many United States military veterans as possible to Washington D.C. to see the memorials of the respective war(s) they fought. The trip is provided at no cost to the veterans. Currently, these organizations are focused on bringing veterans of World War II to the National WWII Memorial. He was so impressed with the memorial that he has since attended every Honor Flight arrival back at the airport.

Socha was visibly emotional at the going away event, stating that it was a highlight of his life. Jim Haney, president of the SCC chapter of MOAA presented Socha with a certificate of appreciation for his many contributions to the nation, the community and the local veterans organizations.

Socha married his now deceased wife Naomi in 1948 at Newport, R.I. He has a son Donald and a daughter Barbara, five grandchildren and seven great-grandchildren. He will be greatly missed by all the SCC residents who knew him and, especially, by those who benefited from the things he was able to accomplish. We love you, Ed.