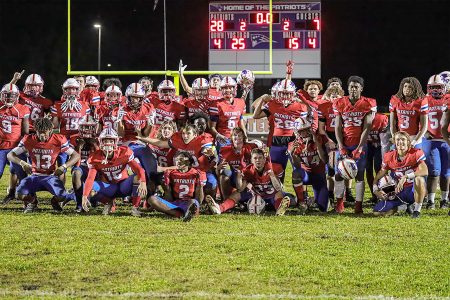 The Longhorns have the unenviable task of motoring south to Sarasota to face the powerful 8-1 Riverview Rams in class 8A. The offensive-happy Rams already thrashed the Longhorns 49-26 this season and 41 to 29 last season.

Instead of focusing on footballs, the three losing teams from last week will be concentrating on mothballs. That’s where the South Shore teams’ uniforms are headed until next season.

In opening 8A playoff gridiron action, Coach William Mosel’s Riverview Sharks played their best game of the season. Unfortunately, it was not quite enough. The Sharks courageous comeback effort fell short 34-27 on the home field of the Wharton Wildcats in Tampa. Now 7-1, the Wildcats host 5-2 Newsome in the next round this Friday night.

Last Friday, Wharton propelled to an early lead and appeared to have the game on ice 21-7 in the 3rd quarter. At that point coach William Mosel’s Sharks woke up and played its best football of an otherwise forgettable season record-wise. 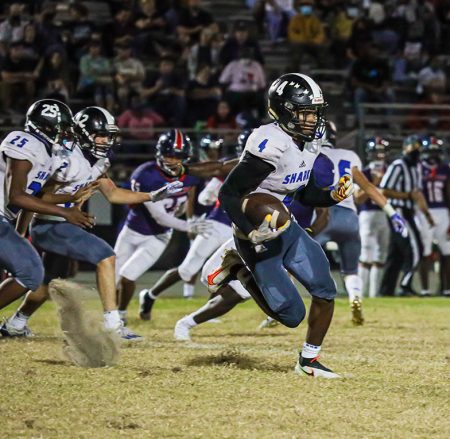 PHOTO BY Rich & Company Florida LLC / 727-351-2243
Kadeem Robinson, #4, a senior for Riverview Sharks, pictured above against Tampa Bay Tech earlier in the season, had a career game rushing and receiving in playoff loss to Wharton, scoring 4 TDs.

Sharks senior running back Kadeem Robinson, an offensive spark all season, shocked Wharton with a 46-yard scoring jaunt. Robinson and the Sharks did not want their 1-7 season to end 1-8. Robinson continued his heroics. The senior grabbed a 38-yard scoring pass to make it 34-20 late in the 4th quarter. Riverview then pulled off a successful onsides kick and was cooking again. Another 32-yard TD aerial hauled in by Robinson in the corner of the end zone stunned Wharton. With only 24 seconds on the clock, the Sharks tried another desperation onsides kick but could not corral the bouncing pigskin this time. Wharton ran out the clock and moved on. Riverside went home to pack up the uniforms until next year. Coach Mosell is banking on this season as a learning experience as he hopes to return closer to the Sharks 2019 record of 8-3.

Meanwhile, East Bay’s record fell to 2-7 at Largo. Pinellas Park High roared out to a 21-0 halftime lead. Coach Frank LaRosa’s Indians never caught up in the 7A playoff, scratching out only a TD and an extra. EB’s James Thompson, a junior, scored from 11-yards out and Nick Linenberger drilled the PAT. Sophomore Nathan Carter continued his good play, hitting 11 of 21 passes for 101 yards. The Indians added 151 more yards on the ground but never overcame the slow start on defense to get even with Pinellas Park. The season ended for East Bay with the 28-7 defeat.

The Spoto Spartans made it a negative clean sweep for South Shore teams. Coach Alfred Smith’s Spartans ended the season at 3-6 as the team performed as flat as the topography of west central Florida. Lake Gibson eliminated Spoto 77-0 in Lakeland. The rampaging 9-1 Braves scored on a 64-yard TD aerial on the second play of the game and the rout was on. It was 34-zip after the opening stanza and 57-0 at halftime. Spoto could only muster 1-yard total offense all night and suffered 3 turnovers, 7 sacks and a safety in the devastating 6A loss.

Lennard, hoping to delay its uniform storage, heads to Sarasota where the Riverview Rams wait after belting the Longhorns 49-26 this season. Riverview also ripped the Horns 41-29 in a 9-4 Rams campaign last year. The Riverview/Sarasota team opened this year’s playoffs with a 42-0 thrashing of Plant High last week while Lennard was idle. The 4-4 Longhorns have scored 201 points in eight games, an average of 25 points per game. On the other side of the ball, Lennard has yielded 165 points total, an average of about 20 per outing. Compare this to the Rams’ productivity of 251 season points or about 28 points per game on offense. On defense the Rams coughed up 108 total points in nine games or only 12 points average per contest.

Longhorns’ Coach Ramsey is looking to slow down the Rams’ offensive punch and to shore up a lackluster running game to provide balance to junior QB Gavin Henley’s passing to a bevy of talented receivers.

The winner of Lennard vs. Riverview Rams travels Nov. 27 to play the winner of Osceola vs. Palm Harbor. The season ends for the loser.

Like every other walk of life, Covid-19 has affected high school football and other school sports in Florida.

Teams have played a truncated season, most a 7 to 9 game schedule. The Florida High School Athletic Association in August revamped its season protocol and its post season. That meant all football teams are eligible for the state playoffs, no matter their record.

Along with the shortened season, the playoffs grew, as all could participate in at least one game under the temporary win-or-go-home playoff policy. From its Gainesville office, the FHSAA said its modified plans for 2020 are like no other season.

In setting up the brackets for the playoffs to determine champs in the various divisions, a blind, random draw was utilized for the first time. To determine match ups nothing else was used: not district record, overall record, point systems, RPIs, Max Preps, etc. To determine sites/home games, that was simple. Merely flip a coin! A heads or tails meant 4 of the 5 South Shore teams went on the road for first round games. The biggest disappointment is the newest high school in South Shore, Sumner High Stingrays, just opened this fall, were denied a playoff spot. This rejection is a bureaucratic decision by the FHSAA policy, which will not permit first-year schools to enter the playoffs due to not having a senior class. Sumner High, it should be pointed out, compiled a 7-1 record in its inaugural year under Coach Ashwood, with several victories over varsities competing in the playoffs. The Rays only loss was to the Durant Cougars. Sumner also easily dominated a couple of junior varsity squads. 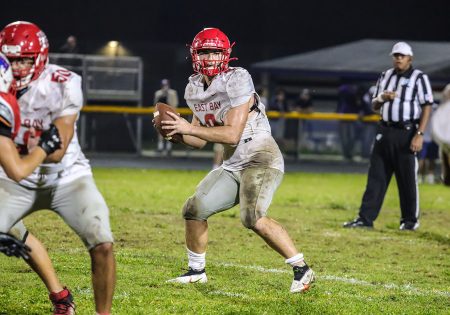 PHOTO BY Rich & Company Florida LLC / 727-351-2243
East Bay plans to rebuild next season behind upcoming junior stalwart Nathan Carter, #8. Carter, above, looks for a receiver against Pinellas Park. The Indians expect him to continue to provide leadership, passing and rushing next season. 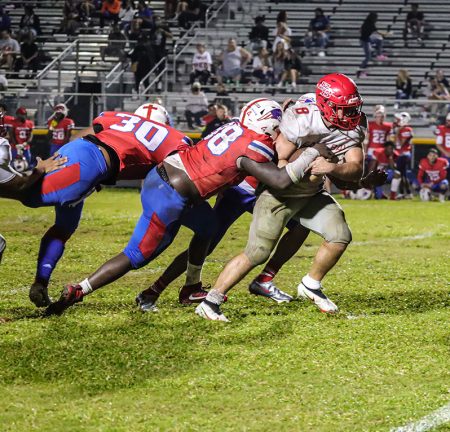 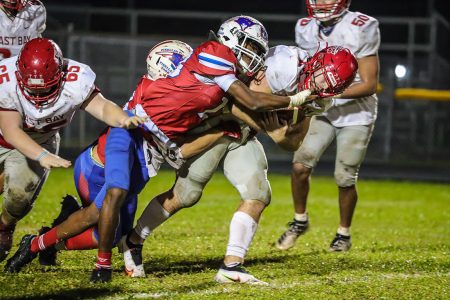 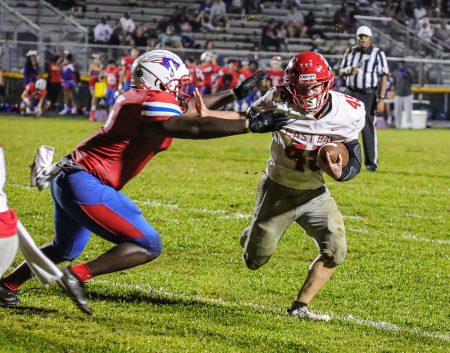 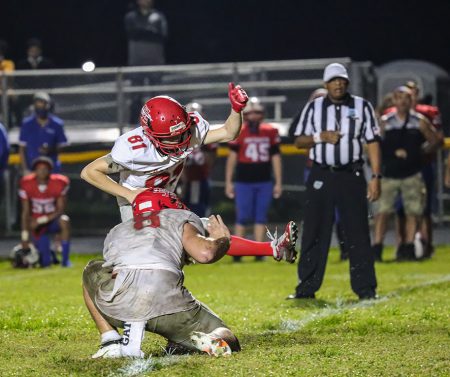 PHOTO BY Rich & Company Florida LLC / 727-351-2243
East Bay Nick Linenberger, #81, boots PAT out of the hold of #8 Nathan Carter in playoff loss to Pinellas Park. Linenberger returns next year to continue handling the extra points, the kickoffs and the punting for the Indians. 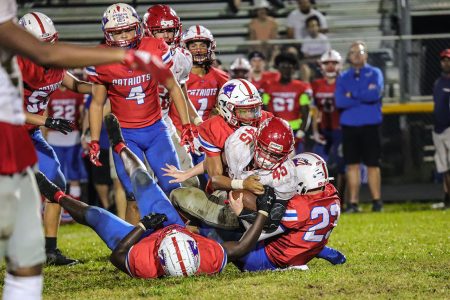 PHOTO BY Rich & Company Florida LLC / 727-351-2243
Taking a hit from a Pinellas Park defender in last week’s playoff loss is East Bay’s Kashawn Jones, #9, a sophomore running back and defensive back. 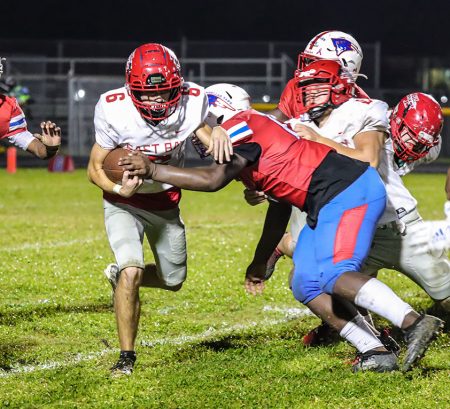 PHOTO BY Rich & Company Florida LLC / 727-351-2243
Taking a hit from a Pinellas Park defender in last week’s playoff loss is East Bay’s Kashawn Jones, #6, a sophomore running back and defensive back. 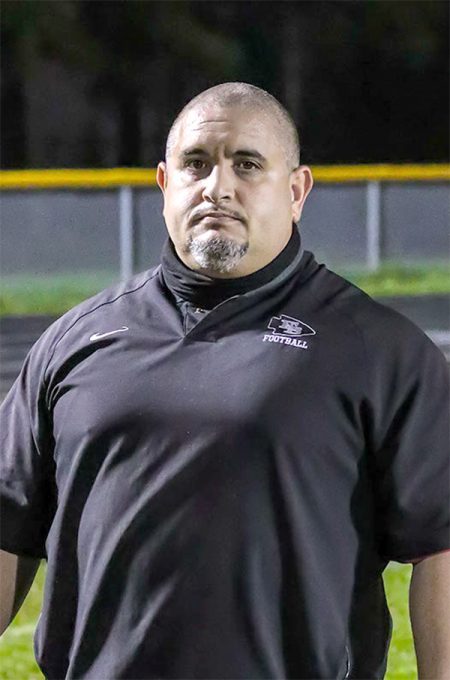