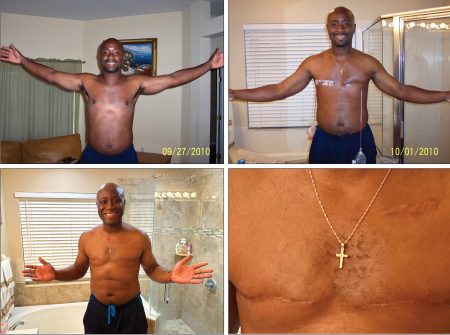 As a man of deep faith, Valentino Hart tested that conviction in a way he never thought possible when he was diagnosed with breast cancer a decade ago, and eight years before his wife would receive her own diagnosis. 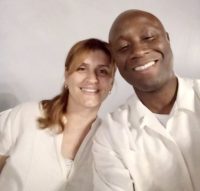 Hart’s discovery started with the detection of a small lump in his right breast, which led him to the doctor’s office. “He looked at me and said, ‘Valentino, you have breast cancer,’ and I recalled right there on the spot just praising God and worshiping him, because I didn’t know what else to do.”

At age 36, Hart said he was surprised when his doctor first suggested a mammogram because he believed at the time that such a screening was reserved for women. Test results in hand, Hart said he went to his car and called his wife.

“That’s one of the toughest things I had to do: call my wife and let her know I was diagnosed with breast cancer,” Hart said.

Another shock came later, when at the hospital, he entered the room designated for his first chemotherapy treatment.

“I was under the impression that I was going to be the only male and the only young person in there,” Hart said. “But to my surprise there were people younger than me and older than me. There were males in there as well with breast cancer, and I was very humbled by the experience.”

Overall, the lifetime risk of a man getting breast cancer is 1 in 833, according to the American Cancer Society, which reports that breast cancer is 70 times less likely among black men than among black women and 100 times less likely among white men than among white women. To spread the cause for research and prevention, October is recognized as National Breast Cancer Awareness Month, launched in 1985 by the American Cancer Society, in partnership with the pharmaceutical division of Imperial Chemical Industries. In 2011, the Florida House of Representatives voted to set aside the third week of October as Men’s Breast Cancer Awareness Week.

“I encourage men that this disease affects us as well,” Hart said. “We need to check our bodies for any lumps in our chest area and follow up with the doctor, because early detection and treatment helps save lives.”

At the beach in December 2017 in Nassau, the capital of the Bahamas, Valentino Hart and his mother, Monica Fox; his wife, Karla Hart; and their children, Valentino “Tino” Hart Jr., 17, and Olivia Hart, 14.

Hart’s fateful self-examination took place July 31, 2010, when he was in Fort Lauderdale visiting his aunt who had had a breast removed because of breast cancer. He saw a doctor the first week of August, had a biopsy Aug. 24 and Sept. 2 tested positive for breast cancer, stage 1.

Born and raised in Nassau, the capital of the Bahamas, Hart moved to Tampa in 1993 to attend Hillsborough Community College. He received a bachelor’s degree in criminology at the University of South Florida and works for the Hillsborough County department of juvenile justice as a probation officer.

A Brandon resident, Hart said he rededicated his life to God at Love First Christian Center in Riverview on Sept. 12, 2010, where pastors Jomo and Charmaine Cousins helped him through his toughest days. Fifteen days later Hart had a bilateral mastectomy, meaning both breasts were removed, along with a few lymph nodes on the right side. His last chemotherapy treatment was Dec. 21, 2010.

“To God be the glory,” Hart said, about testing negative for cancer on Jan. 18, 2011, and for how cancer has changed him spiritually, physically and mentally.

“I rededicated my life to God, who is the source of my strength,” Hart said. “I eat and drink healthier, exercise weekly and take my Tamoxifen and supplements daily. And mentally, I read and meditate on God’s word every day, which gives me the peace that surpasses all understanding.”

Turning his “test” into “testimony,” Hart said he counsels people going through their own cancer journeys, which came to bear in a profound way when his wife Karla tested positive for breast cancer in 2018.

They waited until two days before their mother’s surgery to give their children the “good” news, which they countered with the “great” news that both Valentino Hart Jr. and Olivia Hart had been accepted to Tampa Prep Academy, their dream school.

“They asked for the good news first, and I told them their mom’s cancer, like mine, had been detected early, and that the same God that helped me is going to help mom, and we’re going to believe in that,” Hart said.

“Fear can paralyze you, but faith is unlimited,” Hart added. “My family is strong. We don’t allow people and things in life to stress us out. We take every moment in life as a blessing, good or bad. Everything happens for a purpose.”

That includes self-examination and early detection, which is the best defense against the spread of cancer in both men and women.

“This disease doesn’t discriminate against gender or race, so be proactive by completing your annual mammogram as recommended by your physician, by self-examination for breast lumps and by following up with your doctor immediately if a lump exists,” Hart said. “Do not ignore the signs, and encourage others to do the same.” 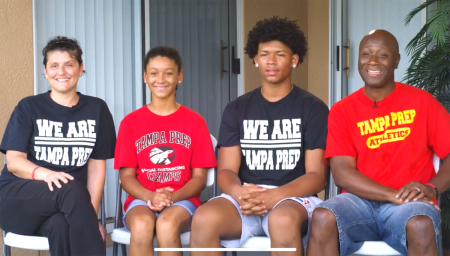