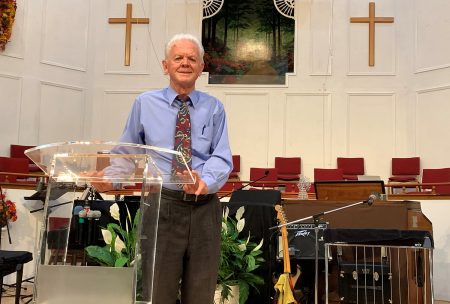 LOIS KINDLE PHOTO
Brother Mac, pastor of the First Baptist Church of Gibsonton, is shown here at the speaker’s podium in the church’s modern-day sanctuary.

On Oct. 23, the Rev. Malcolm “Mac” Clements will celebrate his 45th year at First Baptist Church of Gibsonton. The former tropical fish farmer was invited to shepherd the South Shore house of worship in 1975, and it’s the first and only church he’s ever pastored.

Selling his farm that year to answer God’s calling, Clements supported his family from the proceeds, while he grew the church and its congregation.

“Brother Mac,” as he is called by his flock, was born and raised in Gibsonton. After graduating from East Bay High School in 1961, the third-generation Floridian went on to earn a Bachelor of Arts degree in theology from the University of Marietta in Georgia. He was ordained as a deacon and later as youth minister by the Rev. Raymond Hancock, of Providence Baptist Church, who took Clements under his wing and mentored him.

Whenever there was a ministerial vacancy during the 10 years he owned the fish farm, Clements was asked periodically to fill in on an interim basis at the First Baptist Church of Gibsonton. He was honored to do so.

“My grandparents, Malcolm and Ruby Swate, were charter members here in 1930,” he said. “I’m blessed to be able to carry on something they helped establish and minister in the area I love and grew up in.”

Lots has happened over the years since Clements became full-time pastor in 1975.

He and his wife, “Pat,” founded a Christian school at the church in 1983 and ran it for 25 years, educating area children who traveled seasonally with their parents in the carnival and circus industry. The school closed in 2008, when Pat’s health began to decline following a stroke.

“Brother Mac has been a wonderful part of our community,” said Lee Stevens, president of the International Independent Showmen’s Association. “My own children went to his school, as did the kids of other performers. 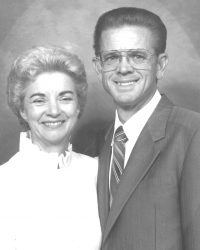 COURTESY PHOTO
Pastor Mac Clements and his wife, “Pat,” will celebrate 58 years of marriage Dec. 7. This photo was taken in 1984.

“He’s our go-to pastor for funerals and memorials, and he ministers on a personal level to many show people,” Stevens added. “Whatever the need, he’s always there for us. He never says ‘No.’”

Clements was honored as an honorary association member in 2004 and made a lifetime member last January.

In 1991, he was among five Baptist ministers in the Tampa area to start a program called H.E.L.P. Ministries, formed with the purpose of providing spiritual education here to foreign nationals, rather than sending local missionaries to their countries, and then supporting their ministries back home. Today, the group is a national nonprofit program, which supports 1,000 missionaries in more than 60 countries on a budget of $2 million and is based in North Carolina.

In 2005, the minister and members of his flock started a thrift store and food pantry on church property.

Clements dipped his toe into politics in 1982 by running for state office.

“I didn’t win, but I gained many beneficial contacts from the experience,” he said.

The pastor believes in giving back. His Vision 2020 plan to benefit both the church and Gibsonton community demonstrates that.

Last January, before COVID-19 hit, Clements raised some serious issues with Hillsborough County government officials and felt he received an “awesome response.” He said the area was being neglected, citing its lack of a sewer system and permitting for community growth.

“Our kids walk to elementary school in the dark along Gibsonton Drive, a four-lane road, and there are no lights,” he said. “And we have a tremendous need for road repair.

“Somebody needed to step up, so I did,” Clements said.

The Rev. Buddy Burton, First Baptist Church of Gibsonton associate pastor, works closely with Clements on a daily basis and thinks the world of him.

“Mac is one of the greatest pastor/preachers I’ve ever known,” said Burton, who spent his entire career in local church ministry, evangelism and Gospel music, worked with leading pastors across the country and was inducted into the Southern Gospel Hall of Fame in 1998. “He’s a very upfront community leader, as well as the spiritual leader of our church. People just love him because he’s humble and trustworthy. His leadership is beyond reproach.”

Clements admits he’s had lots of help over the years, and at age 77, he relies on it.

“I could not have continued carrying this load without the support of my wonderful staff and my congregation,” he said. “They are so good to me.”

Clements and his wife moved to Sun City Center 10 years ago. They have two daughters and five grandchildren and will celebrate 58 years of marriage Dec. 7. 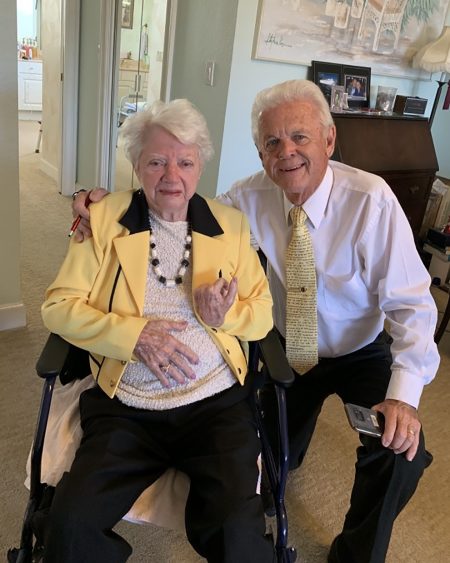 COURTESY PHOTO
The Rev. Malcolm “Mac” Clements and his wife, “Pat,” now live in Sun City Center. He credits her for being by his side throughout his ministry and actively supporting the church until her health began to decline. 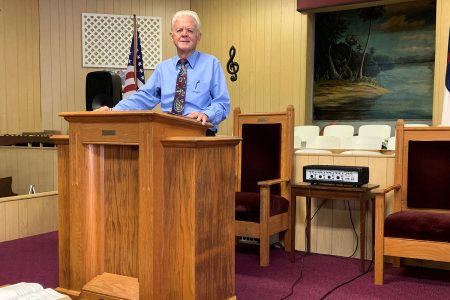 LOIS KINDLE PHOTO
Pastor Mac Clements is shown here in the old sanctuary at First Baptist Church of Gibsonton, where he started his pastorship in 1975. 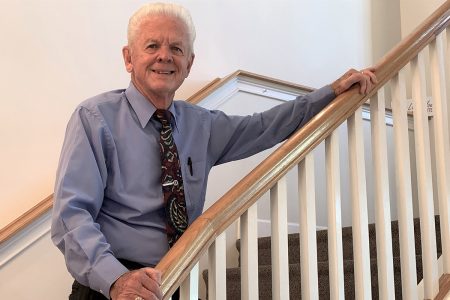