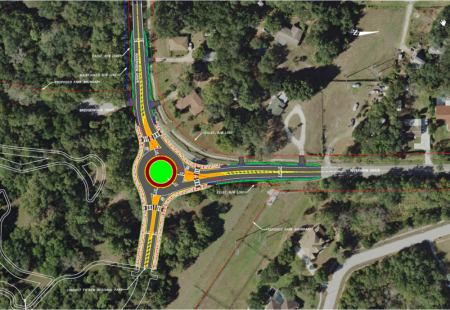 An aerial view of the roundabout traffic circle set for the entrance to the new Riverview/Alafia Conservation Park off Riverview Drive.

Touted as the “online home for outreach and listening efforts,” the Hillsborough County Engagement Hub offers a closer look at upcoming capital projects, including the Riverview/Alafia Conservation Park and roadway improvements, with a traffic roundabout and an art sculpture that have raised both support and some concerns.

Slated for Riverview Drive, between Interstate 75 and U.S. 301, construction is set to begin next year on a 27-acre site, purchased by Hillsborough County officials in 2018 with the intent to build a riverfront park in Riverview.

As a so-called “passive park,” most of the land’s natural features will be left undisturbed, with a vegetative buffer of trees along the western edge of the property, designed to separate the park from nearby residences. Open areas will feature plants native to the area.

Amenities for park-goers include wooded picnic areas with shelters and restrooms, paved parking, a walking trail and an observation tower to provide bird’s-eye views of the Alafia River. A similar 37-foot, wooden observation tower, offering stunning sunset views of both the Tampa and St. Petersburg skylines, opened last month at the Apollo Beach Nature Preserve. Like the Apollo Beach preserve, at 6760 Surfside Blvd., the Riverview/Alafia Park is set to open sunrise to sunset.

Under development with two Hillsborough County departments — capital programs and environmental lands management — the park’s traffic roundabout entrance off Riverview Drive will feature a statue of Riverview pioneer settler Benjamin Moody. Likewise, a call for artwork inside that county-owned passive-use park has been issued for a sculpture representing a person from the Native American community that settled along the mouth of the Alafia River.

Recognizing history’s role in community differentiation is what prompted Hillsborough County Commissioner Stacy White to propose artwork focused on Moody and the town’s Native American heritage. Letters in support of the two sculptures were sent on behalf of the Greater Riverview Chamber of Commerce and the Tampa Bay History Center. In the case of the Native American sculpture, support also came from the Seminole Tribe of Florida’s Ah-Tah-Thi-Ki Museum.

Tanya Doran, the chamber’s executive director, noted that Moody was a “soldier, cattleman and civic leader,” who “was chosen as one of the first county commissioners in Hillsborough County.” Museum director Kate Macuen thanked the commissioners “for the consideration of erecting a statute that honors the tribe’s ancestors and provides an educational experience for the public.” Writing on behalf of the Tampa History Center, C.J. Roberts and Rodney Kite-Powell noted historic sculptures “help preserve and share Hillsborough County’s history, one that is richer, more diverse and, yes, older than most any other in the country.”

In a handful of comments posted to the Hillsborough County Engagement Hub, some concerns were raised about the Moody statue, calling it a “horrible idea to celebrate an individual who fought in the Seminole Wars and was a confederate soldier.” One commenter added, “Why would you invite division?” The commenter’s suggestions for “more appropriate” posthumous honorees included Riverview rancher E.G. Simmons and educator and civic leader Earl J. Lennard.

A traffic roundabout is a circular intersection allowing traffic to flow in a counter-clockwise direction. Vehicles yield at entry, circulate to the left and exit to the right.

One commenter asked “why the county would spend our tax dollars on this statue in a time of civil unrest” while another noted skepticism about “having a statue of someone who fought in the Seminole Wars” and who “is potentially responsible for killing/chasing off the Native Americans who originally lived in the area.”

“No statues of people,” wrote one commenter. “I think the art should be of anything but an historical figure right now.” A commenter preferring native plants and animals suggested, “Dolphins would be nice.”

As for the traffic circle itself, county officials contend modern roundabouts are safer because they effectively reduce speeds to below 25 miles per hour, which helps to “eliminate most lethal crashes, such as T-bone and head-on crashes, that can occur at conventional intersections.” Slower speeds, they contend, “also benefit all the other users of the roundabout, including pedestrians, bicyclists, skateboarders, children and the elderly.”

Some commenters questioned that logic in this regard. As one commenter put it: “There is no way for a pedestrian, bicyclist or skateboarder to get to that area. Riverview Drive needs sidewalks and bike lanes.”

Also noted as roundabout benefits are that there are no red light idling and queuing, which help to eliminate toxic and greenhouse gases, and that minimal maintenance is required, which frees up traffic crews to focus on repairing intersections with traffic signals.

As of Oct. 12, the day before the deadline to post comments, there were 39 participants in the hub discussion and 68 comments tallied. One asked for a playground; another begged not to have one. One asked to “keep shade trees over the walking trail,” and another heralded the park as a way to give people in the area “a place to go to just relax.”

Construction on the $4.8 million project is set to begin in the summer of 2021. After a contractor is selected, a public meeting will be held to provide details on construction phasing and timing. Handling public input on the project are Erthel Hill (park improvements) and Lynn Decker (intersection improvements). Hill can be contacted at 813- 272-7008 and via email at HillE@HCFLGov.net and Decker at 813-307-1763 and via email at DeckerL@HCFLGov.net. To visit and subscribe to the Hillsborough County Engagement Hub, visit www.HCFLGov.net/HCEngage. 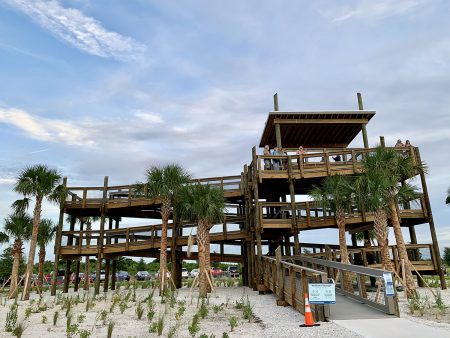