Joe Eletto, a man with a servant’s heart 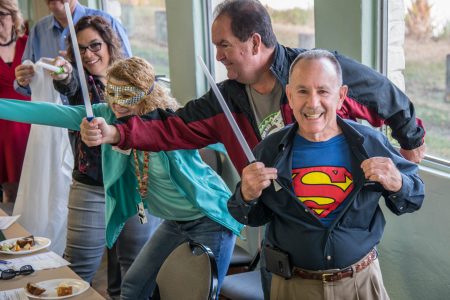 Joe Eletto reveals his sense of humor at a Greater Riverview Chamber of Commerce Ambassadors team meeting a couple of years ago.

Joe Eletto, a man with a servant’s heart

Whether it’s through his workplace, church or local chamber of commerce, Joe Eletto is constantly giving back to the community.

The 73-year-old Apollo Beach resident simply likes helping people. Sometimes that involves finding or selling them a home, sometimes it’s through teaching Sunday School or ministering to seafarers at the Port of Tampa, and other times it’s serving on boards and committees on behalf of veterans. And that’s not all.

“My faith dictates why I give with no expectation of getting anything back,” said the longtime member of Providence Baptist Church, where he works on its missions and finance committees. “I think I was born with a giving heart; it’s just how God made me.”

The people who know him well confirm that.

Jill Andrew has been Eletto’s friend for close to 20 years.

“He’s definitely a man of God,” she said. “He’s tenderhearted, kind and passionate. I know I could go to him for anything if I needed to, and he would respond without question. 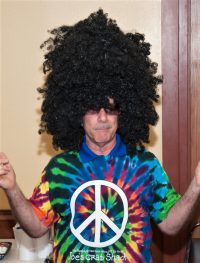 COURTESY PHOTO
As board president of the Greater Riverview Chamber of Commerce in 2014, Joe Eletto celebrated in style at a 1960s-theme member dinner.

“It seems he has something in common with everyone, and he has a knack for finding it,” she continued. “I love the guy.”

Tanya Doran, executive director of the Greater Riverview Chamber of Commerce, agrees. She has known Eletto for about 13 years and considers him both a friend and mentor.

“Joe is faithful, authentic, kind and leads by example,” she said. “He has a charming, good-natured sense of humor and always takes time to help and support others. He’s an all-around good guy who makes our world better.”

Eletto was born in Yonkers, N.Y., and grew up in Orlando after his family moved to Florida when he was 5. His father, Vincent, a civil servant with the Air Force and an artist by profession, mapped bombing runs during World War II. Before the war, he worked for Terry Toons as the animator of Mighty Mouse and Heckle & Jeckle. His mother, Genevieve, primarily worked at home and eventually took a job with a bank in Winter Park.

Eletto graduated from Admiral Farragut Academy St. Petersburg in 1964 and went on to earn a Bachelor of Science degree in business administration from Florida Technical University (now known as the University of Central Florida). He graduated from its charter class in 1970.

During his college years, he worked part-time at Sears and served in the Army Reserves (from 1967 to 1971).

“I joined the Navy after college, entered (its) flight program and was commissioned an ensign at Naval Air Station Pensacola,” Eletto said. “I completed basic flight training and went on to basic jet training at the Naval Air Station in Meridian, Miss., where I later elected to drop from the program, a regret that followed me all my life.”

He subsequently went into management training with Sears, traveled around the country handling various assignments and became a district merchant on Sear’s apparel side.”

Eletto briefly owned his own air purifier business but opted instead to sell real estate for Century 21 Beggins Enterprises, where his wife, Eileen, was administrator.

LOIS KINDLE PHOTO
Joe Eletto, 73, stands beside “Vanna White,” a 1991 Volkswagon Vanagon, the “other” love of his life. Despite an odometer reading of 250,000 miles, he still drives it proudly.

“I started in 2006 when the market tanked and cut my teeth on short sales,” he recalled.

It is a profession he’s found truly fulfilling.

He’s has been recognized by the Greater Riverview Chamber of Commerce as its Ambassador of the Year in 2008, 2010, 2012, 2017 and 2019 and Citizen of the Year in 2015. He served as its board president in 2014, is a member of its Presidents Council and founded its Military Affairs Committee, which he currently co-leads. He’s also a longtime member of the chamber’s Taking Care of Business relationship building group.

Darrell Green, of Impact Realty, met Eletto at the chamber and works with him on the Military Affairs Committee.

“I’ve known him for several years, and he’s one of the finest, most kindhearted persons I’ve ever met,” Green said. “He’s definitely a giver, not only to people in need but also to organizations. He deserves a lot of recognition.”

Mike Jones, president of the Greater Riverview Chamber of Commerce board, agrees.

“It’s easy to talk about Joe,” he said. “He has a servant’s heart, and anytime I need assistance with a project, I know I can call him.”

He and Eileen, the love of his life, have been married since 1981. The other love of his life is “Vanna White,” a 1991 Volkswagon Vanagon, a vehicle he still drives despite its odometer reading of 250,000 miles.

“I have a thing about VW vans,” Eletto admitted. “I also own a bright yellow VW bug with black racing stripes. But when I need to take a client around, I drive my wife’s Lexus.”

When he retires, he plans to restore his 1960 Austin Healy “bug eye” Sprite and travel more frequently to see his six children, 18 grandchildren and five great-grandchildren.