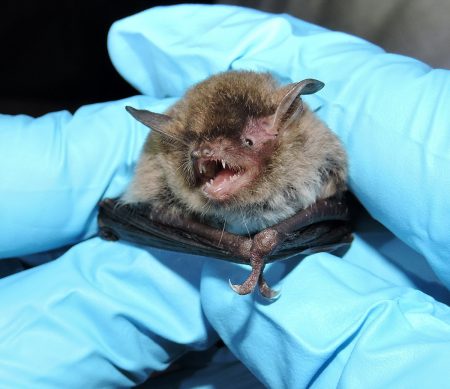 FWC photo by Karen Parker
Bats are the only mammal that is capable of true flight. They consume rootworms, cutworms, corn borer moths, potato beetles and grasshoppers.

Bats are symbolic of Halloween, but their benefits go overlooked all year

One of my favorite times of the year is fall because it involves Halloween. What better creature than a bat to help us celebrate trick or treating by having children decked out in scary outfits? And, attracting wildlife is the seventh principle of the Florida-Friendly Landscaping, so bats are important from that perspective also.

Poor bats, they’re so misunderstood. Unfortunately, this lack of bat facts is leading to their decline. Habitat destruction, harmful pesticides and nesting colony disturbances have led to the endangerment of three Florida bat species: the gray, Indiana and Mastiff.

• By day, bats take shelter in foliage, under tree bark, in caves, mines, buildings and rock crevices. Many assemble in nursery colonies in the spring, leaving in July and August to begin their trek to hibernation sites. Up to 300 bats per square foot can cluster to hibernate. If hibernation is interrupted too many times, a bat may not be able to survive the winter due to the decrease in fat reserves.

• Bats are the only mammals capable of true flight. By night, bats are uniquely equipped to catch flying insects, using their wings, skin around their tails and mouths. Bats find their food sources and travel by making ultrasonic sounds that echo off solid objects. This same technique is used by dolphins.

• Most Eastern bat species produce one bat baby per year, while other species produce two to four. Female colony bats create a nursery prior to giving birth. When the mothers all crowd together, the nursery temperature is higher than 100 degrees. Baby bats are furless and need a warm and humid place to survive. Colony-roosting bats have less colorful and thinner fur than solitary or foliage-roosting bats. Baby bats, like other mammals, feed on milk until they’re able to secure food on their own.

Bat houses keep bats warm, dry and safe while sleeping during the day. Bats prefer temperatures between 80 and 100 degrees. If the temperature is not comfortable, bats will not inhabit the house. If bats don’t inhabit a bat house after three or more years, either change the exterior color of the bat house or its location. Don’t move the house near bright lights or an area with much human activity.

You can install a bat house any time of year, but bats generally take up residency in early spring. If you install your bat house in the winter, it will be available when bats are seeking a new home. Bats are more attracted to houses mounted on the sides of buildings or poles than if tree-mounted because building-mounted bat houses provide more sun and less predator perch sites. Predators include owls, hawks and falcons.

Select the roost site near food and fresh water sources and a location where the sight or odor of the guano (excrement) won’t be an issue. Shovel guano periodically for use in your landscape. Locate the bat house at last 20 feet from potential predator perch sites and at least 12 feet off the ground.

Provide a wildlife bat habitat (bat-i-tat) in your backyard, which will give you and your family hours of educational entertainment and significantly fewer insects. Bats … they’re not limited to our Halloween imaginations and experiences.

For additional information on the identification of Florida bats and how to build your own bat house, access them at