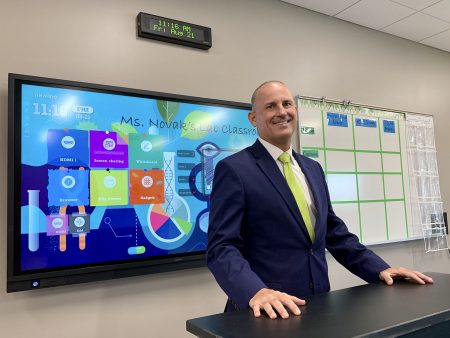 The reality of the Hillsborough school district’s general fund budget deficit took center stage this month with the revelation that 7,330 “missing” students account for a potential $56.23 million dollar hit on top of a $32.28 million year-end shortfall for the fiscal year ended June 30.

Add to that the inability to transfer capital dollars amounting to $40.23 million, which had been done the year before, and six months into his tenure, Superintendent Addison Davis faces what could be called the $128.8 million question.

“In addition to leading through a pandemic, we have a $128 million potential challenge,” said Deputy Superintendent Michael Kemp, whom Davis hired from Clay County, where Kemp had been the assistant superintendent for operations under Davis.

Kemp said he had met with school board members “one-on-one” to address budget-cutting actions under consideration, including not filling vacant positions or positions lost to attrition.

Moving forward, “tough decisions” will have to be made, Kemp said. “As painful and as unpopular as some may be, they’re absolutely required at this time to operate and support in a fiscally responsible manner moving forward. The organization simply is at a point where we can’t continue to kick the can down the road.”

While Kemp said the goal was to “preserve critical programs, like IB, magnet, arts and PE,” school board members and Davis himself acknowledged the rampant spread of news in the community that such programs would be cut.

At the school board meeting Sept. 22, following the budget workshop earlier that day, Davis made it clear how he views the situation from his perspective as superintendent and also as a former elective teacher and choral student.

“We’ve been trying to message that we are in no way, shape or form ever going to eliminate, reduce [or] remove any art, museum, P.E. programs or accelerated programs within our school district,” Davis said. “These are the [programs] that are the foundation of what we do. Right now, more than ever, as students transition from COVID-19 and not being able to come back to school, [they’re] just getting back to a part of somewhat normalcy and they need these classes more than ever.”

Still, the budget shortfall, not including lingering capital debt amounting to around $1 billion and the reported need to build about 30 schools over the next 15 years to keep up with residential growth, casts an ominous shadow, primarily in the south Hillsborough County area. The school district budget overall is $3.2 billion.

As for the general fund deficit, a key concern is finding the 7,330 students reported “missing,” meaning they did not show up as anticipated, according to the 15-day student count.

According to the 15-day count, there were 215,689 students enrolled, amounting to $1,654,444,631, which represents a difference of $56,426,756. Should those numbers stand for a third enrollment calculation, that is the amount Hillsborough school officials would have to repay the state in February.

Meanwhile, school officials are calling families to track down the “missing” students, whether they are attending charter or private schools, homeschooling or opting to learn online until concerns over COVID-19 abate. “In the meantime, we have to be prepared to give approximately $56 million back to the state if this [enrollment shortfall] were to remain constant,” Kemp said. “That’s a big figure.”

Reclassifying capital dollars to offset a general fund deficit is not an option, as it was the year before, to the tune of around $40 million. The school district this year opened two new schools, Jule F. Sumner High and Belmont Elementary.

“This year we will not have the luxury of having projects that have not been completed, that are going to roll forward from capital,” Kemp said. “So that $40 million, you see, that added to our challenges.”

Davis was hired earlier this year to lead Hillsborough, the nation’s seventh-largest school district. Davis and Kemp made it a point to note today’s budget issues have been inherited. This also was the case for the previous superintendent, Jeff Eakins, under whose tenure the school district secured a half-cent sales tax for school construction and renovation.

During his tenure, Eakins froze teacher hiring and reduced the workforce by 2,000 employees to address a general fund reserve that under former Superintendent MaryEllen Elia had dwindled by more than $200 million, threatening the bond rating that impacted the district’s borrowing.

Meanwhile, school officials had to pay hefty mortgages incurred during the unprecedented school construction boom faced by Earl Lennard during his nine-year tenure as superintendent, which ended in 2005. Under Lennard’s watch, the school district built and renovated 90 schools and weathered budget cutbacks in the aftermath of the 9/11 terrorist attacks.