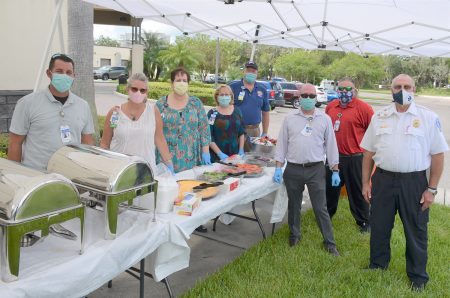 Every year on Sept. 11, commemorations are held throughout America to reflect on the 2,977 lives, including 412 first responders and emergency workers, lost as a result of the terrorist attacks in 2001. This year, South Bay Hospital’s commemoration included an event of appreciation for the Hillsborough County first responders who work with hospital employees in serving the community.

“We had a nice mix of more than 60 first responders stop by,” said Lesley Lykins, South Bay Hospital’s director of marketing and public relations. “It was a great opportunity to connect with them and thank them for their daily service and sacrifice.”

As part of the 9/11 commemoration, South Bay Hospital also observed a moment of silence at 9:59 a.m., the time when the South Towers of the Twin Towers collapsed in New York City. Like many Americans, hospital employees recollected throughout the day where they were at the time of the terrorist attacks.

“They called us in to take over at the airport, since all the port authority officers were over in New York City,” McDuffie said. “I went on a 12-hour shift and just kept working for at least the next three weeks.”

McDuffie, a 26-year Air Force veteran, expressed gratitude for the military members who went on to fight in wars following 9/11. He said it is motivating for people in law enforcement and emergency services to know their work is recognized and appreciated.

“South Bay Hospital’s strong partnership is invaluable to our overall community’s health and well-being,” Zimmermann said. “South Bay’s commitment to having close collaboration with EMS on both internal initiatives and external initiatives ensures better outcomes when emergencies strike. We have the utmost respect for our first responders and value their selfless service.”

He noted local EMS providers frequently comment on how seamless the transfer of patients is from the EMS unit to the emergency room.

“The partnerships we have with our community’s first responders save lives,” Zimmermann said.

“9/11 is a day of remembrance for those who made the ultimate sacrifice,” said Sun City Center Emergency Squad Chief Mike Bardell. “It’s important and respectful for us to remember them on this day. And it’s a great thing this community looks out for its first responders in this way.”

South Bay Hospital was founded in 1982 as part of HCA Healthcare West Florida. The 138-bed community hospital offers a wide variety of patient-centered services to the community, including 24-hour emergency services, cardiology, general surgery and orthopedics. 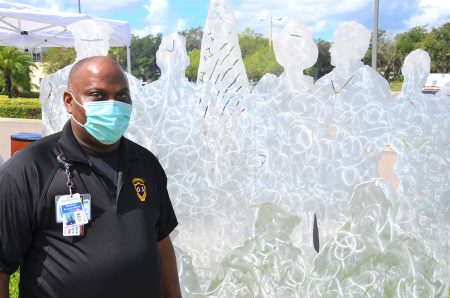 Michael McDuffie, a 26-year Air Force veteran and member of South Bay Hospital’s security team, was a New Jersey State Highway patrolman on 9/11. He was called to cover the airport when Port Authority Officers were responding in New York City. He’s shown here standing in front of the First Responder’s Memorial at the hospital. 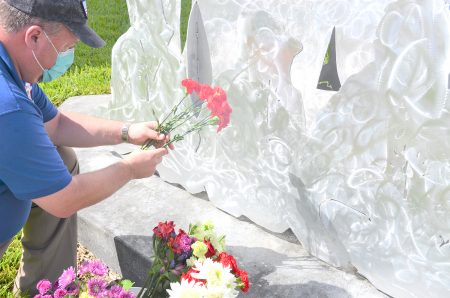 By placing flowers on the First Responder Memorial, dedicated at South Bay Hospital in August 2002, Michael Zimmermann, the hospital’s director of Emergency Services, pays respect to the 412 first responders who died as a result of the 9/11 terrorist attacks in 2001. 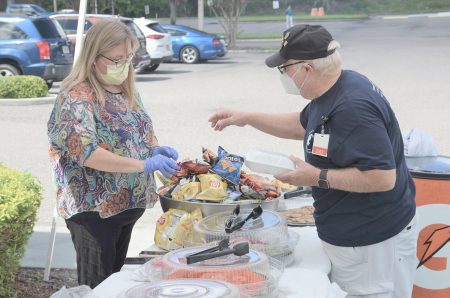 Laura Shotzberger, director of case management at South Bay Hospital, serves a BBQ lunch to a member of the Sun City Center Emergency Squad Sept. 11, during an appreciation lunch for first responders at the hospital. 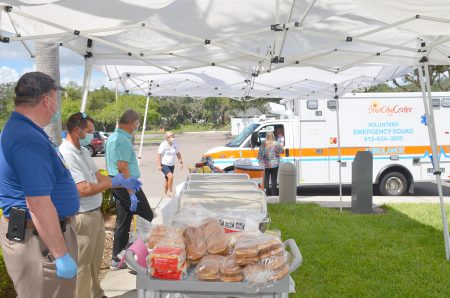 South Bay Hospital employees watch as an ambulance team from the Sun City Center Emergency Squad stop by for the drive-through lunch the hospital hosted in appreciation of area first responders on Sept. 11, as part of a day of commemoration of those who died in 9/11. The hospital is committed to closely collaborating with EMS and other emergency personnel in ensuring better outcomes for area residents affected by local emergencies. 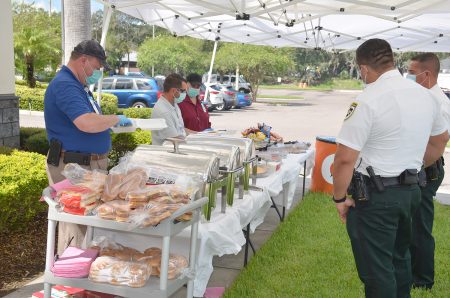 South Bay Hospital provided boxed BBQ lunches to members of the Hillsborough County Sheriff’s Department in appreciation of their commitment and service to the community.