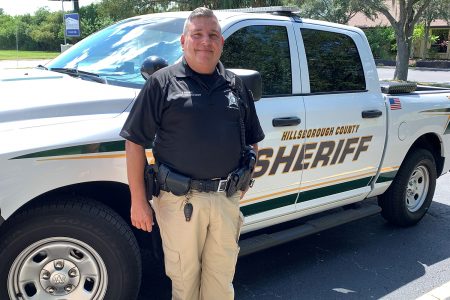 “We’re really excited to bring his enthusiasm and 23 years of experience as a deputy to the citizens, businesses and HOAs of District 4,” Ura said.

The 53-year-old Gibsonton-Riverview area resident handles service calls for residents of Gibsonton, part of Riverview, Apollo Beach, part of Ruskin and FishHawk, essentially the top half of Dist. 4. As an all-around traffic deputy, he’s laser-, radar- and DUI-certified. His responsibilities include working with homeowners’ associations, community organizations and neighborhood watches, traffic, school zones and issues of an area of mixed demographics.

“He will keep a really good eye out for his neighborhoods,” Merry said. “He wants to help them better themselves, especially when it comes to safety concerns. He’s worked in the Gibsonton area for years, and he (currently) coordinates speed monitoring throughout South Shore. He’s a good deputy.”

Sherman attended Ruskin Elementary School and Eisenhower Middle School in Gibsonton. After graduating from Chamberlain High School in 1985, he immediately enlisted in the military. He spent five years in the Air Force, first as a personnel specialist, and then as an enlisted aide for 4-Star General John Shaud in Belgium.

After his discharge in 1990, Sherman managed a Blockbuster Video store for two years and then joined the Hillsborough County Sheriff’s Office. He spent five years as a dispatcher before becoming a deputy in 1997.

“I wanted to be a cop since I was little; I always wanted to help people,” he said. “As a dispatcher, I used to do a lot of ride-alongs, many of them with Sheriff Chad Chronister, when he was a deputy. I got to see what deputies do, and then the Sheriff’s Office sponsored me to go to the (Law Enforcement) Academy.

Since then, Sherman has worked as a street deputy, field trainer, community resource deputy (in Lutz), in street crimes and now as CRD for South Shore.

He’s married and has an 18-year-old son who recently graduated high school and started college, where he is studying to become a veterinarian.

Sherman is excited to meet members of the community and is reaching out to residents, HOAs, businesses and others to introduce himself and determine their needs. In the months to come, he plans on coordinating community trash pickups with proper social distancing. He said he has a good working relationship with Hillsborough County Code Enforcement.

“I like relating to people and helping them,” he said. “I’m glad to be here, and I look forward to meeting everyone and becoming a part of the community. I have seven years left before I can retire and hope to retire from this position. I encourage residents and business owners to contact me with their needs, issues or questions. I’m here to help in any way I can.”

Sherman works out of the District 4 office, 508 33rd St. SE, Ruskin. Until he gets a direct phone number, Sherman can be contacted by email at bsherman@hcso.tampa.fl.us or by calling 813-247-0455 and leaving a message for him.