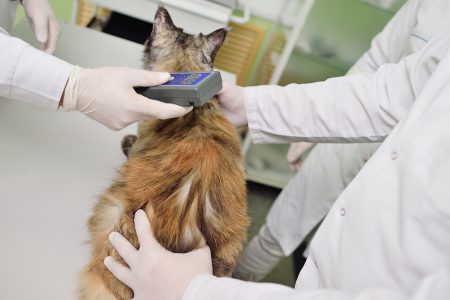 When a microchip is properly registered with its manufacturer, a lost cat’s or dog’s shoulders can be easily scanned to determine its owner’s name, location and phone number.

Everyone knows about the Sun City Center Security Patrol’s all-volunteer street monitoring and subsequent deterrence of crime in the community. But not as many know about another free service it provides, helping lost pets reunite with their owners.

Thanks to the Sun City Center Dog Owners Group, the patrol has a scanner that reads microchips, which has enabled the patrol to help rescue about 100 dogs and even a few cats, said Chief Fred Fiedler.

“On average, we get reports from residents three or four times a month about dogs wandering in their neighborhoods or from owners whose dogs are lost,” he said. “In Sun City Center, since most of the dogs have microchips, we’re able to do a scan and find out where their owners live and return their pets quickly. A few animals without chips are posted on social media.”

A microchip is simply inserted into the loose skin between the shoulder blades of a pet, just like an injection. The procedure’s cost is minimal.

“It was a gift we really appreciated,” he said. “We’re all dog lovers here, and it’s a wonderful feeling to return one that’s lost to its owner.”

Connie Lesko is one of those owners.

“Our dog, Pearl, got out of our house one day though the front door, which we thought had been locked, but it didn’t latch all the way,” she said. “It had blown open just enough for her to escape, while we were away.

“A neighbor down our very busy street spotted her walking along, called to her, gave her water and put her in the garage, before calling the Sun City Center Security Patrol,” Lesko added. “She knew the patrol had a pet scanner.”

A patrol volunteer came out, scanned Pearl and learned she lived just down the street. With the information registered with the chip, the neighbor was able to call Lesko to come get her.

“We’re so grateful our neighbor cared enough to get involved by calling out to Pearl and that she knew about the scanner,” Lesko said. “I immediately called Fred to tell him how wonderful it was for the patrol to help.”

“We purchased the scanner in 2017 and donated it to the Security Patrol as a good deed,” said Bob Bagley, president of Sun City Center D.O.G. “We’re always looking out for the dogs of our community. It’s a win for everyone involved – for us, the patrol, the owner and the dog.” 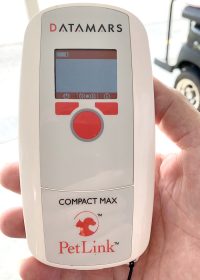 Pet experts say one of the surest ways of getting a lost pet back is to have it microchipped.

The tiny radio-frequency transponder has its own unique identification number. About the size of a grain of rice, the microchip generally is injected by a veterinarian under the loose skin between a dog or cat’s shoulder blades. The inexpensive procedure is like getting a vaccination.

When properly registered with the manufacturer, it can be scanned to determine the name, location and phone number of the animal’s owner. It’s essential this information is updated every time the owner moves.

“Pets are as much loved as kids in this community,” Fiedler said. “It’s a member of the family, and the microchip protects it. A pet can’t talk, but a chip talks for them. It tells us where the pet belongs.” 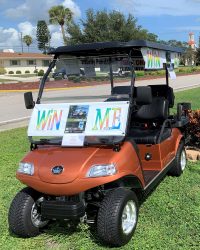 Security patrol volunteers will be at Club Renaissance Sept. 16 from 10 a.m. to 2 p.m., selling raffle tickets for the patrol’s December drawing for a 2020 Evolution golf cart. The suggested donation for tickets is $5 each, $20 for five, $50 for 15 or $100 for 30. All proceeds from this annual fundraiser benefit the nonprofit patrol.

The Sun City Center Security Patrol is partnering with The First Tee of St. Petersburg’s mentoring program for at-risk youth. From Sept. 18 to 25, any used individual clubs, full sets, bags or headcovers, even gently used apparel, may be dropped off at the patrol office, 1225 Pebble Beach Blvd. N, to help First Tee teach life skills and the game of golf to kids ages 6 to 18.

Residents may also make a tax-deductible cash donation by emailing tcharlton@thefirstteestperersburg.org or calling 727-685-5758.