With the collective addition of 1,227 single-family attached and detached homes, school officials project these developments will generate the need for 207 elementary, 93 middle and 143 high school student stations. Capacity falls short by 28 [elementary] and 90 middle school seats.

To mitigate construction costs for generating necessary seats, school officials seek $3.25 million in school concurrency proportionate share funding; they do so in collaboration with county officials.

The two public hearings were held Sept. 2 and Sept. 8.

At the first hearing, commissioner Mariella Smith called for a meeting with the school board in the new year “to see through these processes.”

“This proportionate share agreement seems overly complicated, for one thing, with the two hearings required since they’re being handled as a development agreement,” said Smith, who fills one of two countywide district seats. “I think everyone would agree it would be a good idea to look at streamlining this process, at least at our end, since the agreements are really hammered out between the school district and the developers.”

Commissioner Pat Kemp, who fills the second at-large seat, agreed, noting she has spent “hours” with staff officials “to try to understand this process.”

“In my first two years [as a commissioner], we didn’t have any of these [agreements], and then they kind of sprinkled in,” Kemp said. “All of a sudden, I saw [these six], so I was very alarmed and concerned. I do think we need to take some time in the new year and have a forward-looking conversation on how we move forward.”

School concurrency dates back to a time when new schools were opening with portable classrooms on site due to residential growth that outpaced school enrollment projections. Faced with lingering debt just under $1 billion and the pressing need to build 30 schools over 15 years, newly seated superintendent Addison Davis has his work cut out for him. Collecting on school concurrency mitigation proportionate share funding is a step in that direction.

Reviewing the six agreements at the center of this month’s public hearings gives a taste of the area’s growth, highlighting the collective need for an additional 443 student stations to accommodate the development of 1,227 detached (803) and attached (424) single-family homes. A capacity shortfall is noted for 28 of the 207 elementary student stations projected and 90 of the 93 middle school stations projected. School officials say they can accommodate the 143 high school stations generated.

A middle school to relieve Shields and Eisenhower is surely needed in the south county area, exacerbated by the shortfall of space noted for 90 of the 93 student stations projected for these six developments alone. It’s been news for some time that the area is in dire need of middle school space. Toward that end, 450 middle school students this year are being accommodated at Sumner High, which as a new high school, per district rules, opens without a senior class. The inaugural class of 450 students at Sumner’s Academy 2027 will be allowed to attend the school through grade 12, a one-of-a-kind experience in the nation’s seventh-largest school district.

Meanwhile, a new school for pre-kindergarten through grade 8, now known as PK-8 UU, is planned for the Waterset community, south of Paseo Al Mar Boulevard and west of Interstate 75. Middle school students for the six developments at the heart of this month’s school concurrency public hearings have all been assigned temporarily to this school, with the caveat that over the years, school construction and boundary changes are possible, which could alter that decision. Also, the school itself, if deemed a magnet school, would be set to offer enrollment via application. 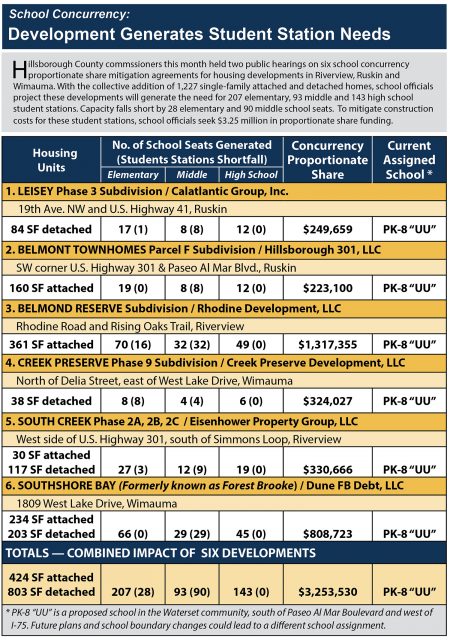