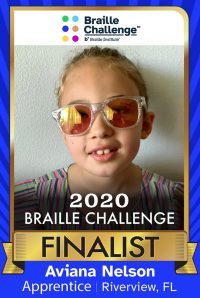 Aviana Nelson, of Riverview, 7, was one of 50 finalists out of more than 1,200 participants in the Braille Institute’s recent 2020 Braille Challenge. Due to a rare condition called septo optic dysplasia, the child has been completely blind since birth.

She was recently named one of 50 finalists out of more than 1,200 participants in the Braille Institute’s 2020 Braille Challenge, where she was among 10 children ages 6 to 8 in the Apprentice category, one of five categories in the competition.

To get there, Aviana competed in regional competitions that took place during the first two weeks of July throughout the country to determine who would win a spot in the challenge’s virtual grand finale on July 31. Ultimately, Aviana and her mother, Narissa, learned she wasn’t among the top three finishers in her category.

“Although she didn’t place, I’m so proud of her and all of her accomplishments up to this point,” Narissa said. “We will be back again next year, if she chooses to compete.”

Normally, she and Aviana would have flown to Los Angeles, where the finals traditionally take place. However, due to the pandemic, this year’s competitors were tested in their hometowns July 6 to 13, and the finale was streamed live on the institute’s You Tube page.

“This year, rather than having students and families come to us, (we took) the Braille Challenge Finals directly to them,” Sergio Oliva, associate vice president for the Braille Institute’s National and Youth Programs, said in a press release. “The digital experience we created (captured) the essence of the two-day event and celebration and effectively (championed) braille literacy.”

The annual Braille Challenge has taken place for the past 20 years and, according to the institute, is the “only academic competition in North America for students who are blind or visually impaired.”

The goal is to inspire kids and teens in grades 1-12 to hone and practice their braille literacy skills. Competitors are tested on reading comprehension, spelling, speed and accuracy, proofreading, and tactile charts and graphs.

Aviana was born with a rare condition called septo optic dysplasia, which caused her visual impairment. When she was 2, her parents started her training by hiring an occupational therapist to come to their house to teach her shapes and the like.

The following year she became a student at Valrico Elementary, which offered individualized education plans for students with special disabilities. It was there she was introduced to braille. 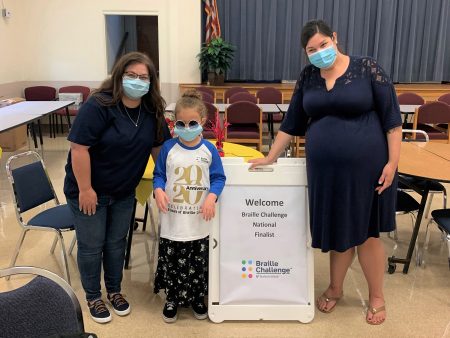 Aviana Nelson poses with teachers Shalene Lamotte, left, and Amanda Lawyer, who helped her get to the 2020 Braille Challenge finals. Lamotte helps the child with her mobility, and Lawyer teaches her Braille.

“It was like a full day of elementary school for her,” Narissa said. “By age 5, she could read words.”

Aviana is currently a student at Colson Elementary School in Seffner, where she is involved in a program for visually impaired students. She can now read full sentences. 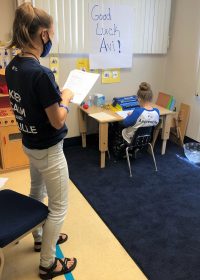 Last year, her teacher gave her a flier to take home about entering the regional competition for the 2020 Braille Challenge in January. She competed and won 1st place, qualifying for the nationals.

“She’s still so young, but she’s excited about what it means, given that I was so happy about it,” her mom said.

Aviana will be going back to school soon because she needs the interaction with her teachers. She spends 30% of her time in special-ed classes and 70% in a regular classroom. She has a sighted aide and cane to help her get around.

“Aviana asks a ton of questions,” Narissa said, describing her child. “She’s definitely a happy child; she likes to talk a lot, and she has a big imagination. She enjoys meeting new people, and she loves to swim and learn about dinosaurs.