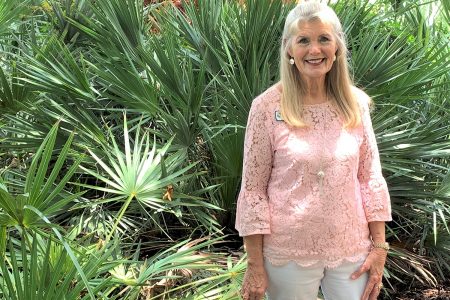 LOIS KINDLE PHOTO
Sun City Center resident Connie Lesko is the “real deal,” when it comes to serving others. She has spent her lifetime supporting causes and organizations that help the less fortunate, those who are suffering and the special needs of seniors.

When Connie Lesko walks into a room, she makes everyone feel loved and accepted. Her presence is magical; she literally lights up the place. That’s due to her warmth and humility, her willingness to help anyone at any time.

Originally from Charleston, W. Va., Lesko’s daddy was a coal miner, and her family was very poor. Her mother had a sister who lived in Ft. Myers, so in 1956, the family moved there so her father could provide a better life for his family. He got a job as a welder on a shrimp boat, and her mom became “the best waitress in town,” Lesko said.

“We were poor, but we kids (she, her brother and two sisters) didn’t know it,” she added. “We were a very close-knit family. We always felt loved and had what we needed.”

Even as a child, Lesko was interested in serving others. “I went to church by myself,” she said. “My parents would take me and pick me up. It was special because it was a happy place. I loved the social part of it and also the giving back part. I enjoyed making people happy.”

Lesko learned about mission work and the importance of helping those less fortunate in Sunday school. “That’s where my faith began,” she said. “Living a Christian life begins with service to others. That’s what Jesus did.” This was something she never forgot.

During her years at Ft. Myers High School, Lesko participated in a service club and did volunteer work in nursing homes.

“All my life, I’ve felt blessed and wanted to give back,” she said. “It’s actually a gift I give myself. The reward always outweighs my involvement.”

As she matured, Lesko learned that nothing is better than bringing people together for a cause. She realized great things can be accomplished through teamwork.

Fifteen years ago, she started the South Shore Walk to End Alzheimer’s in Sun City Center and chaired the annual fundraiser until 2019. She no longer organizes the event, but she’s still involved behind the scenes.

Both of her parents, Paul and Eloise Bledsoe, had Alzheimer’s, and her mother-in-law, Ernestina, had Lewy Body dementia. All three eventually died of these diseases.

“It was primarily my parents who inspired me all those years,” said Lesko, who is part of a four-year clinical trial at the USF Health Byrd Alzheimer’s Institute in Tampa. “There is little chance it will help me, but I do it for those coming after me.”

Her desire to serve the senior community led her into business development, first for seven years at Freedom Plaza and then for a year at Inspired Living, a community serving only Alzheimer’s patients. She briefly retired but missed being involved, so when she received the opportunity to work part-time with the Retired Officers Corporation at Freedom Plaza, she jumped right in.

Throughout her adult life, Lesko has been active in area chambers because she feels it’s an important part of community involvement. She is currently active with the Sun City Center Area Chamber of Commerce, where she chairs its Ambassadors Committee and is a member of its Military Affairs Committee. A couple of years ago, she worked with the Military Family Support Trust, the chamber and Humana on a special project called Backpacks for Homeless Veterans.

Many moons ago, she served as the executive director for the Greater Riverview Chamber and is a former member of the SouthShore and Brandon chambers.

Ardently patriotic, she coordinates transportation through Freedom Plaza for all South Shore veterans to attend orientation and travel to Washington, D.C. for the West Central Florida Honor Flight and has done so for the past four years.

She has been a guardian for and traveled with three World War II veterans, which she describes as “days she’ll never forget. “I love it,” she said. “I’m totally in awe and honored by these veterans. Spending time with them, you learn what true service is.”

“Like Alzheimer’s, there are very few families untouched by cancer,” she said.

Today, she sees her role as that of encourager.

“I get really great joy in supporting someone in a leadership role and seeing them experience the reward of serving others,” she said.

It’s something that comes naturally to this kind-hearted soul.

“Connie’s the real deal,” said Tanya Doran, executive director of the Greater Riverview Chamber of Commerce. “She leads by example; she’s authentic, truly kind and serves as a great mentor. She’s fantastic at that.

“Connie is one special lady,” she said.

“Connie doesn’t think she’s special, even though everyone knows she is,” Messman said. “The hardest word for her to say is ‘no.’ She rarely takes a back seat in anything she does; she’s a true leader. I just love her.”

And Jane Keegan, executive director of the Military Family Support Trust, has this to say about her friend of 10 years: “Connie is a gregarious, outgoing person who places others before herself and always looks for the best in people,” she said. “When she sees it, she always tries to find ways to share those good qualities with others.”

Lesko has been married 51 years to her husband Mike, whom she credits with supporting her in everything she does. She says the same of her son, Mike Jr., a firefighter; daughter-in-law, Jennifer, a police officer; and daughter, Amanda Gary, who for 10 years raised foster children. They got their serving hearts from their mom.

“My mama taught me to look at people with special needs with love, to sit with the elderly and to not judge a homeless person,” Gary said. “She taught me by action. I’m grateful for every nursing home we visited when I was a little girl, for every penny I watched her share with the homeless and the hours she worked tirelessly for more ‘causes’ than I can count.”

“May my legacy be I always tried hard to use the gifts God gave me in loving, appreciating and helping my family, friends and community,” she said. “Like Erma Bombeck said many years ago, ‘I hope to go to heaven with my pockets empty.”’