Everyone’s invited to take part in

Recently, between June 16 and 23, the South Bay Hospital medical team had a blast participating in a special project painting rocks for the community. Called “South Bay Rocks,” the initiative was introduced as a creative outlet to provide stress relief for South Bay employees, while also giving the community an opportunity to connect and have some fun. 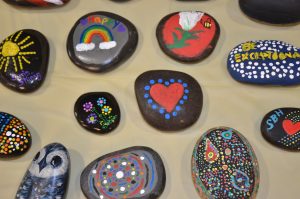 “In times like we are experiencing right now, I think it’s important to have inspiration,” said Dan Bender, South Bay Hospital CEO. “Our team members and colleagues here at South Bay wanted an opportunity to brighten someone’s day, and it was very important for them to give back.

“One of our senior leaders here paints rocks with her children and that stood out as something we could scale here,” Bender continued. “Each rock is different and unique, and they are all meant to help bring smiles.”

During a special time set aside in the afternoon in the hospital cafeteria, about 150 employees painted more than 200 rocks with designs ranging from owls and smiley faces to potato heads and lady bugs. Each rock included words of inspiration or encouragement with instructions for what to do next printed on its back side. 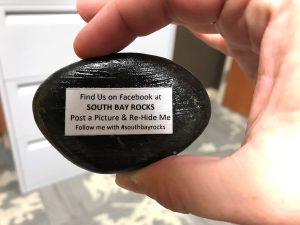 On the back of every rock, community members will find words of encouragement or inspiration and instructions on what to do after they’ve found one of the rocks painted by South Bay Hospital employees.

“Our caregivers are distributing these rocks throughout the South Shore area in Riverview, Apollo Beach, Sun City Center and Ruskin, Parrish and beyond,” Bender said. “We’re really hoping (finding one) brightens someone’s day for a few moments.”

Members of the community play a big part in this project. It’s actually designed to take on a life of its own.

“If you find a rock, you can go to our Facebook Group, South Bay Rocks, and post a picture of it,” said the project’s coordinator, Michelle Harvey, South Bay Hospital’s chief financial officer. “This is exciting, because then the caregivers at the hospital will know their rocks were found, and that’s a really fantastic connection. We’re so excited to share this with the community.”

The Facebook page, www.facebook.com/groups/southbayrocks, was created for people to share the rocks as they discover them. The group is private, so folks will need to join the group to be able to post a photo. 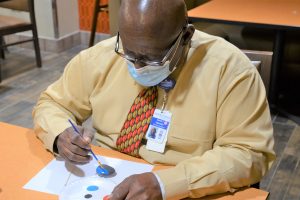 Telephone operator Davis Thomas begins painting his rock, which, once completed, he will place on his way home somewhere in South Shore for a community member to find and post on Facebook.

“People in the Sun City Center community have already found of the rocks,” said Lesley Lykins, South Bay Hospital’s director of public relations and communications. “Our team members, who went out on their own time after work to place them, were so excited to see people posting them so quickly.

“We’ve placed them in places like the top of a fire hydrant, by a pool, on top of a mailbox and in the middle of a sidewalk,” Lykins added. “You might find them anywhere.”

Area residents are invited to join the fun by painting and placing their own rocks. Labels for the rocks are provided on the Facebook Group page, so people can attach them to the rocks they paint and distribute them around their neighborhoods.

Lykins said “South Bay Rocks” would make a nice project for places like senior living communities and assisted living residences. Organizations seeking more information or tips and tricks for implementing this at their facilities should call her at 813-634-3301 or email lesley.lykins@hcahealthcare.com. 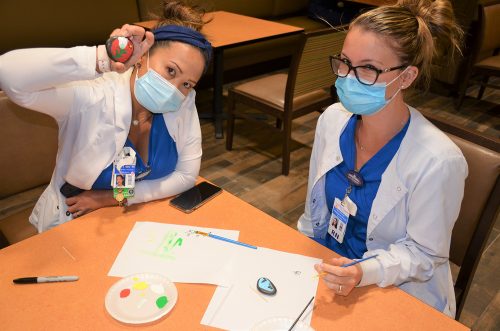 LESLEY LYKINS PHOTOS
Registered nurse Vanessa Shepherd, a member of South Bay’s cardiology team, works intently on painting a shark on the rock she will place in the community when she’s finished. 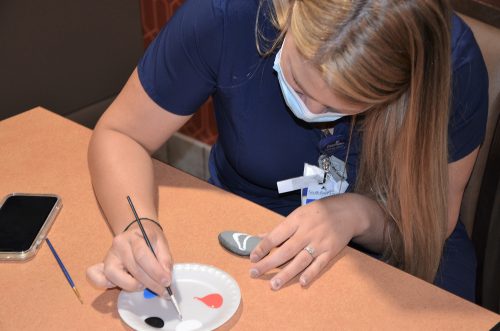 Registered nurse Vanessa Shepherd, a member of South Bay’s cardiology team, works intently on painting a shark on the rock she will place in the community when she’s finished. 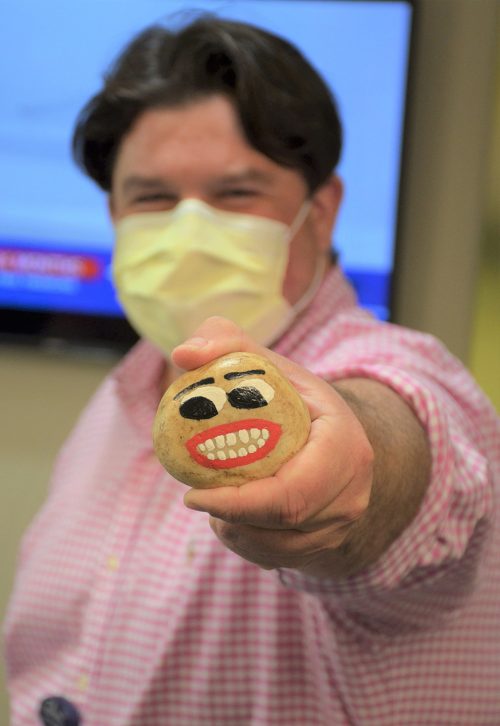 South Bay Hospital CEO Dan Bender shows off the “potato head” rock he recently painted during “South Bay Rocks, a special initiative the hospital introduced to give its team a stress-relieving, creative outlet that reaches out to the community in a fun way.