Ivin Gunder is the newly named principal of Riverview High School. He hails from Clay County, where the newly seated superintendent, Addison Davis, last worked as its schools’ chief . 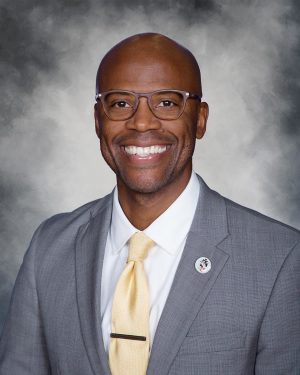 “If I had to say one thing, it’s that I care deeply about everyone, from the students to the faculty and staff from the custodians all the way up through administration,” said Ivin Gunder, the newly appointed principal at Riverview High School.

Gunder follows past principals J. Vince Thompson, Bob Heilmann and Danielle Shotwell, all of whom worked at East Bay High before landing their jobs at Riverview. Thompson and Heilmann retired as Riverview principals. Shotwell left this year to become the school district’s general manager for employee relations but not before clapping out the school’s 21st graduating class since its August 1998 opening.

With his self-acknowledged open-door policy and kids-first philosophy, it’s now up to Gunder to lead the 2,500-plus student high school at the corner of Balm River and Boyette roads.

Growing up in Jacksonville’s inner city, a student in the lower-quarter percentile, Gunder said he learned the value of education and pride and passion in your work from his single-mom, who worked 47 years as a custodian.

“She just always told me to get your education, that’s going to be your key,” Gunder said. “Also, my teachers were patient with me. A lot of credit goes to my fourth-grade teacher, Evelyn Box. She just didn’t give up on me. I went from third grade, a troubled student not really knowing where I was going, to being on the safety patrol in fifth grade.”

Coaches, too, “took a hold of me and gave me that tough love,” Gunder said. A basketball player at Jacksonville University, Gunder was injured and sidelined his senior year.

“Coach Hugh Durham told me he never understood why bad things happen to good people,” Gunder said. “He told me, ‘This is going to be a defining moment for you. You’re going to have to figure it out.’ I thought, what better way to make a positive impact than through education. There’s a lot of things you can do in life, but very few things you can do without your education.”

Gunder comes to Riverview High from Lakeside Junior High in Orange Park, Florida, where he was assistant principal, vice principal and, most recently, principal. He served two years as vice principal at Oakleaf High, also in Orange Park. He taught geography 12 years at Fleming Island High School in Clay County. He earned a bachelor’s degree in geography from Jacksonville University and his master’s degree in educational leadership at the regionally accredited American College of Education, a private online college based in Indianapolis.

Gunder said his social media presence is another way to connect with students and teachers. During the pandemic shutdown, to keep spirits light, he shared his unique talents as a #DancingPrincipal (including an impressive spread eagle jump). Another oft-used hashtag is #PlantTrees, which hails back to The Man Who Planted Trees, a book Gunder received from Anthony Rodesney, a teacher at Lakeside High, after Gunder first got into administration. Rodesney’s inscription read, “This place is better because of you.”

Now, Gunder is ready to step into his role as a high school principal.

“High school is your last hurrah, and that clock starts ticking in ninth grade,” Gunder said. “It’s the time to be a big thinker, get college ready, or ready for the military or a trade. You have four years to set that plan in motion. The joy I find in being in high school is the growth you see from ninth to twelfth grade, and then they’re off to do great things.”

Gunter is one of several new outside hires. Since becoming Hillsborough’s first superintendent in more than 50 years to be hired from outside the school district, Davis has shaken up the leadership norm, with seven outside hires to his 15-member executive team. At the June 9 school board meeting, Davis announced significant changes as well to site-based leadership, with 33 staff changes that bring new principals to 16 elementary schools, six middle schools and seven high schools. These include Ashlee McManamey, at Ippolito Elementary; Tiatasha Brown, at Giunta Middle; and Gregory Basham, at Rodgers Middle.

“Ideally, whenever there’s change, there’s hesitation there,” said Gunder, who witnessed a similar shake-up when Davis took over in Clay County. “But he got results. There’s a strategic plan there, and the principals got on board. He was so energetic it became contagious, and that just spills out into the classroom with the teachers and the students.”

Davis acknowledged there are “many moves this year,” but he assured board members “the moves are very calculated, very intentional.” He noted that while “some of these decisions are going to be unpopular,” know “that I’ve done this for a long time; I know how to identify talent and how to build capacity.”