Apollo Beach resident Christine Nargi is a perfect example of how someone can turn a life full of lemons into lemonade. 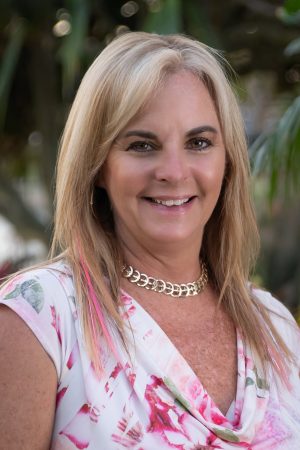 Born in Connecticut, she started life as the only child of a physically, verbally and emotionally abusive father who was addicted to alcohol and pot. He encouraged her to drink and smoke at an early age, and by the time she was 12, she developed an addiction to sleeping pills, which resulted from a need to escape his abuse.

Nargi quit school at 16, ran away, became homeless and slept in an abandoned home. Yet, despite this rough start, she managed to turn her life around, first by getting her General Education Diploma, and then a license in cosmetology in 1991.

At age 18, she married her husband, Tim, who was in the Navy at the time. The couple moved to Italy for five years, and when her husband left the military and became a government contractor, lived up and down the eastern U.S. coast, including northern Virginia for 15 years. In 2013, the Nargis moved to Apollo Beach.

Married for 35 years, they have two adult sons, a daughter-in-law, one grandson and a 2-year-old pit bull named Trixie.

Between 2008 and 2014, Nargi earned a bachelor’s degree in criminal justice and a master’s degree in psychology, both from the University of Phoenix. She used those degrees to go into law enforcement training for four years with the FBI, DEA and a couple of local agencies.

Less than a year ago, Nargi joined Keller Williams South Shore as a real estate agent.

Giving back to the community is important to her.

She recently agreed to join the C.A.T.E. Foundation board to help others with addictions and trauma.

“I feel with my background and life experiences, I can bring a different perspective to the awareness of addiction and its affects,” Nargi said. “Even though I’ve overcome so many obstacles, the trauma still affects me today.”

Tina McGlynn, the C.A.T.E. Foundation’s co-founder and president, is excited to have her onboard.

“Christine has personal experience with addiction, which each member of our board is required to have, whether it involves them or a loved one,” McGlynn said. “She knows a lot of people, is a hard worker and is personally involved in the MiraBay community. With her connections and willingness to be involved, she’s a great fit for our organization.”

The C.A.T.E. Foundation (Conquering Addiction through Education) was founded in 2017 to provide support, resources and aftercare to those affected by substance abuse.