2020 hurricane season is upon us; prepare now 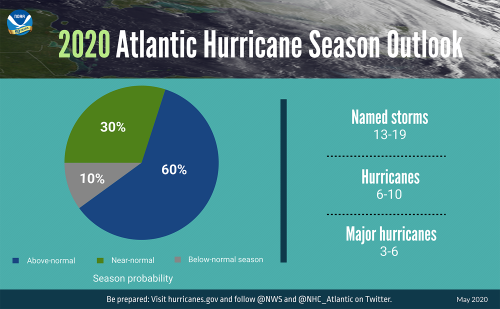 2020 hurricane season is upon us; prepare now

The National Weather Service has just announced NOAA’s forecast for this year’s Atlantic hurricane season, and it’s expected to be a busy one.

NOAA is 70% confident in this year’s forecast.

By way of comparison, an average hurricane season produces 12 named storms, six of them hurricanes, including three majors.

“As Americans focus their attention on a safe and healthy reopening of our country, it remains critically important that we also remember to make the necessary preparations for the upcoming hurricane season,” said U.S. Secretary of Commerce Wilbur Ross, in a national Weather Service email dated May 21. “Just as in years past, NOAA experts will stay ahead of developing hurricanes and tropical storms and provide the forecasts and warnings we depend on to stay safe.” 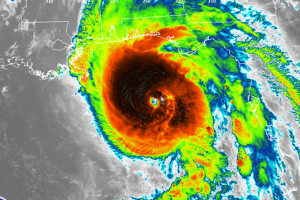 Hurricane Michael was the strongest hurricane on record to make landfall in the Florida panhandle with maximum sustained winds of 160 mph. The category 5, catastrophic hurricane made landfall near Mexico Beach and Tyndall Air Force Base in October 2018. A monstrous storm like this one would devastate the Tampa Bay area.
Enhanced NOAA Satellite Photo

“La Nina, which cools Pacific waters and deflects the jet stream, is predicted to develop during the peak of the season, ” he noted. “This will mean weaker winds aloft, which hurricanes like.”

The center said similar conditions have been producing more active seasons since 1995, the year we had 27 named storms and everywhere in Florida got hit, except for Tampa Bay.

“Statistically, we have a 1 in 200 chance of a major hurricane hitting us,” he continued. “You could live your entire life here and never see one.

Despite the long odds, Noah says the same thing every year. It only takes one to change wreak havoc.

“Even a strong tropical storm can cause heartache all along the coastline in Ruskin, Apollo Beach and Gibsonton and anywhere along our rivers in South Shore,” he said. “Storm surge is our biggest threat, but many times flooding rain kills more people than anything else. Wherever water flows, homes can [be] washed off their foundations; wherever the [water] piles up, we see massive flooding.”

“It’s imperative to have a plan in place and a hurricane kit,” Noah said. “You should know whether or not you’re in an evacuation zone, what the storm surge could be if you are and where the shelters are should you need to evacuate.

“With the pandemic, it’s a whole new game this year,” he added. “Shelter space will be at a premium so, if you can, it’s better to go stay with a relative, friend or neighbor who lives out of the flood zone.”

Considering COVID-19, another important thing to remember is to be prepared with supplies of food and virus protections.

“For a hurricane, you prepare for electrical outages and no running water,” Noah said.