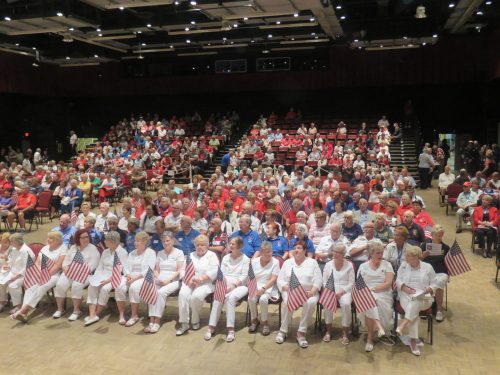 As Memorial Day approaches, our focus on public events paying tribute to deceased military veterans is dimmed. In Sun City Center, there will be no Memorial Day Commemoration Ceremony — a tradition that has held fast for at least three decades—and Memorial Day just won’t be the same without it. 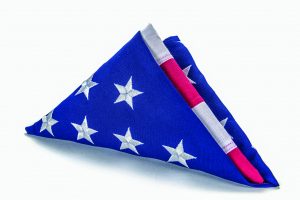 Our 136 SCC deceased veterans (current or past residents) are being honored in spirit this year, however. Their names will be included in the traditional Last Roll Call accompanied by the Living Flag Tribute at the 2021 ceremony. In this part of the ceremony, individuals display flags representing each of the fallen SCC veterans as his or her name is called.

For those unfamiliar with the event, let’s reflect on Memorial Day last year. The commemoration ceremony, held in the Kings Point Veterans Theatre, was hosted by the Military Officers Association of America (MOAA), SCC Chapter and sponsored by the combined military veterans’ organizations of SCC. Many other organizations participated, such as the Hillsborough County Sheriff’s Office (Color Guard), the Boy Scouts and the Trinity Baptist Church Singers (musical interlude), to name a few.

Several hundred attended and heard Judge Michael Scionti, guest speaker, deliver extremely moving and thought-provoking personal military anecdotes. Judge Scionti is an Active Reserve Army Lieutenant with extensive military and political experience, including Veterans Treatment Court in Tampa for veterans who find themselves in legal difficulty. You can hear a recent interview with him on the Veterans Corner Radio podcast hosted by Bill Hodges.

So that we can honor the SCC veterans who have passed since Memorial Day 2019, their names are printed below. Paul Wheat, who compiled the list, is requesting help by our readers to ensure that it is complete and accurate for honoring at next year’s ceremony. If you notice there is a missing name or a name is spelled incorrectly, please notify Wheat by e-mail at pawheatjr@aol.com or call 813-634-7777.