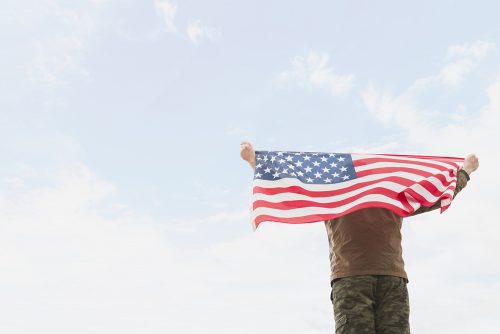 It would be the first time away from home for most – except maybe for boot camp. It was to end on a beach, in a forest, on a hill, in a town, on or under a bridge, on a riverbank, in a rice paddy, in a swamp, in a trench or foxhole, on an island, in a field, in a jungle, in a desert, in a city, in a building, on a roof, in a basement, on a road, in a plane, on a boat or ship or in a submarine, in a prison camp, in a hospital or, sadly, later homeless on the street. Most of them were so young, barely adults. They could not have known that they were a vital part of a huge beast whose strategy sometimes prevailed. They tasted joy and fear and loss and blood and pain and brutality and brotherhood and comfort and hope and loneliness and emptiness and despair and defeat and, sometimes, victory. We honor them – some with flag draped coffins, with 21 gun salutes, with symbols over their graves, which are sometimes in those faraway places, or in massive veterans cemeteries, or with symbols on their urns or on their gravestones in their home towns, some only with white MIA flags, with gold stars in their mothers’ windows, with specially folded flags, with posthumous medals, with their names on memorials – statues or walls or obelisks, with reciting their names at gatherings, with prayers, with toasting them, saluting them, crying about them, all with the promise to never, ever forget them and their sacrifice. We somberly consider always placing young soldiers at risk and question the role of that huge beast.