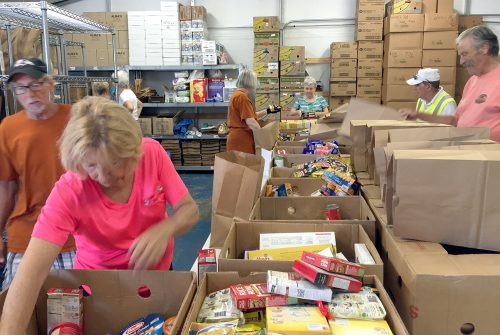 Six South Shore food banks received a nice shot in the arm recently, when the Sun City Center Rotary Club Foundation awarded each $600 to help feed those in need.

According to its president, Ron Banazak, the foundation supports these organizations twice annually with food collections at Winn Dixie. “Since we weren’t able to do that with the current (COVID-19) situation, we decided to give a one-time cash infusion to each one of the pantries in lieu of the April food drive,” he said.

The foundation, a 501(c) 3 nonprofit organization, is affiliated with the Rotary Club of Sun City Center, which raises money every year by hosting an annual classic car show and craft brew fest in February for about a half-dozen college scholarships for Lennard and East Bay High School graduates. This year, seven have been approved, Banazak said.

The proceeds from the fundraiser are turned over to the foundation, which actually makes the awards. Since the late 1980s, the foundation has awarded more than $200,000 in scholarships, said Georgana Collins, board member of both the Rotary Club of Sun City Center and the foundation.

The club also raises money for the foundation’s community outreach fund, and this recent award to the food pantries came from that. Other recent projects have included a donation to Samaritan Alzheimer’s Auxiliary and scholarships for two women to become CNAs. Banazak said more will follow.

All grants the foundation awards are decided by its nine-member board, which includes the Rotary Club of Sun City Center’s current president, Steve Overton, and eight other club members. Its awards are made from earnings from the foundation’s two funds, Banazak said.

The Rotary Club of Sun City Center is comprised of civic-minded men and women who support community and international service projects. It meets at noon every Tuesday for lunch at Freedom Fairways, 3932 Upper Creek Drive, Sun City Center. Guests are welcome to attend a meeting.