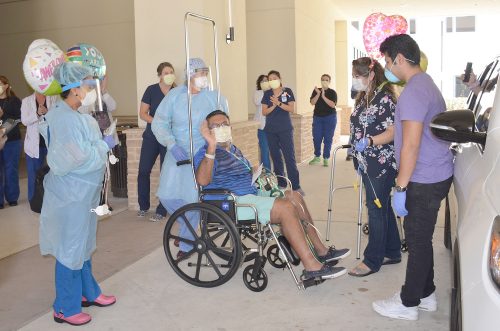 Leo Begazo, 47, leaves South Bay Hospital April 23 after being treated for 17 days for COVID-19. He credits hospital staff members for providing what he called “world-class” care and said he will be forever grateful to them for saving his life. Begazo is himself a nurse and clinic manager for Moffitt Cancer Center.

A 47-year-old South Shore resident is grateful to be alive after spending 18 days at South Bay Hospital battling COVID-19.

Leo Begazo developed a high fever April 3, which became intermittent the next day. By early April 5, the fever was continuous and stopped responding to Tylenol and that evening, he began experiencing shortness of breath. 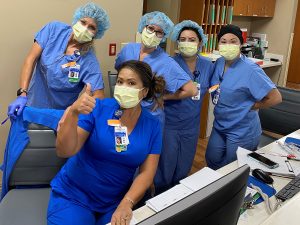 “I was afraid to go to the hospital because I knew I might not come back,” said Begazo, a nurse and clinic manager for Moffitt Cancer Center. “When you’re in the medical field, you kind of know what’s going on with your body, and it was a blessing my wife Carolina called 911 when she did.”

Although Begazo asked the paramedics who arrived to take him to St. Joseph Hospital South, where he said all his medial records were, they followed COVID-19 protocol and delivered him to South Bay, the nearest hospital.

“My anxiety went through the roof,” he said. “I couldn’t breathe, and I didn’t know anyone.”

But when Begazo arrived at South Bay’s Emergency Room, he saw Barbara Latham, a nurse he had once taught alongside. Recognizing him, she came over to assume his care.

“My anxiety immediately went down,” he said. “I knew I was in good hands.”

As it turned out, he was in better hands than he knew.

“Our hospital ramped up early,” said Dan Bender, South Bay Hospital CEO. “We spent hours, days, thinking through scenarios, and we were prepared.

“We are part of HCA Healthcare and have this large, advanced network behind us. We put into place precautions and best practices that were shared across HCA’s network.”

He was formally admitted to South Bay’s PIU (patient under investigation) unit and then later to ICU. His health began to deteriorate rapidly.

“On April 10, Dr. (Kenneth) Yen (a critical care intensivist) and his team came to my room to talk with me,” Begazo said. “He told me my condition was worsening by the minute, and they needed to intubate.

“The doctor said he wanted to save my life; this was my only chance, but there no guarantee,” Begazo recalled. “He also said that if I wasn’t intubated, I would (likely) go into cardiac arrest within 24 to 48 hours and have less than a 10% chance of survival.

Begazo then faced the toughest decision of his life.

“All I could think about is that I didn’t have a chance to kiss my children and say good-bye to my wife and brothers,” he said.

Unbeknownst to him, his wife was in ICU, two doors down. She, too, had been diagnosed with COVID-19.

While Begazo spent 10 to 15 minutes thinking about family memories, the medical team secured Carolina’s consent to intubate him.

But by the time the team returned, Begazo had decided to go ahead with the procedure. He asked the team to wait a second while he prayed.

“I wanted to feel peace as I went under,” he said.

Begazo doesn’t remember much after that.

What he does recall is the way he was cared for.

“I could feel people touching me, and I could hear their voices,” he said. “They never left me alone. They whispered positive things in my ear, like ‘You’re a fighter,’ ‘You got this,’ ‘Your family is waiting for you,’ and ‘God is with you.’

“I felt comforted and secure,” he said. 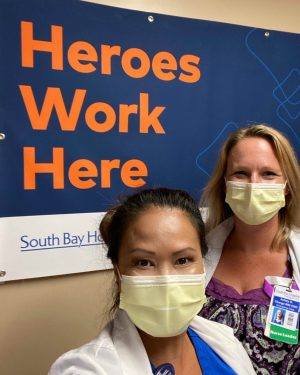 Discharged from South Bay April 23, Begazo is home now undergoing oxygen therapy and happily reflecting on his care and survival. His immediate caregivers and hospital staff lined the first-floor hallway and foyer to give him a rousing sendoff, as he was wheeled to his ride home.

“My view of South Bay Hospital has changed completely,” he said. “I can personally say from experience that it provided me with world-class treatment.

“God knew perfectly why I needed to be at this hospital,” Begazo said. “I felt loved. I felt taken care of as a family member. They saved my life; they saved my family. I’m so grateful I was there.”

Begazo has this advice for others, especially now when restrictions have eased and people will have more contact with each other.

“Take this thing seriously,” he said. “I get so disturbed when people dismiss it. Follow the measures set by the CDC; don’t go out unless you have to, wash your hands and keep social distancing.

“And please celebrate the wonderful doctors, nurses and first responders who are putting their own lives aside to help us.

“This virus can change lives in a second,” he said.

A bit of back story

Begazo cannot be sure how he contracted COVID-19.

He said before he got sick, he and his family were routinely going to the grocery store, gas station and other public places.

His son Leo Jr., 21, was the first to exhibit symptoms and be diagnosed with the virus. He was sent home with antibiotics and other meds and isolated to his room.

Begazo cared for him, using all the PPP he had at the house, he said. On April 1, he, his wife Carolina and 12-year-old daughter Diana went to Raymond James Stadium to be tested and all received a call over the April 5 weekend that they were COVID-19 positive.

Begazo ended up at South Bay Hospital, as did his wife. Unlike her husband, she recovered without intubation.

Their children recovered at home under the care of Begazo’s brother Renzo, a retired Army major, who immediately drove down from Georgia when he learned of the parents’ hospitalization. Renzo pitched a tent in Begazo’s backyard and suited up to go into the house, whenever he needed to attend to the children’s needs.

Begazo’s other brother Jonathan was the family’s spokesperson throughout the entire ordeal and kept Begazo’s oldest son Christian, an Army captain stationed in Hawaii, up to date on what was happening.

Every night at 7 p.m., family members would gather on Zoom to pray for Begazo, his wife, the medical staff and people who were suffering.

“I could not have made it through without their support,” he said.