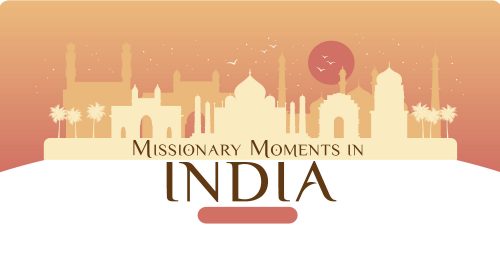 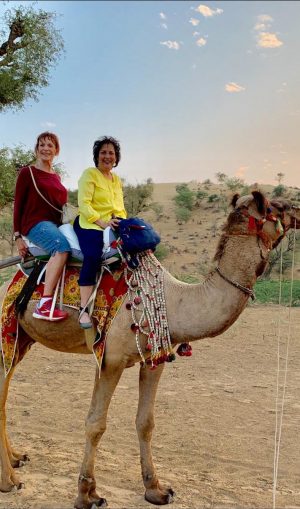 Exchanging life in Sun City Center for life in Rajasthan, India, was a culture shock. However, on this, my third trip, I experienced the country as an Ordained Minister of Gospel Crusade International, of which my home church, The Family Church at Christian Retreat in Bradenton, is a part. My adventures continued as I moved through the state of Rajasthan from Udaipur onward to the Manvar Desert Camp.

Approximately 211 miles north of Udaipur sits the Manvar Desert Camp at the edge of the Thar desert. Pearl and I arrived in late afternoon and ate a quick lunch in the courtyard of the beautiful resort. Off we went to our tent on a jeep for a seven-mile ride into the desert to set up “camp.” Soon we hopped aboard a double saddle for our evening camel ride, Pearl and I hanging on for dear life, bouncing mercilessly on “Sophia.” After the hilarious ride, we were off to what our tour brochure described as an evening “performance around a roaring campfire.” Hah! The circle stage was surrounded by tiki torches (so much for the roaring fire). The “performance” was one fellow squeaking his way through far too many “songs,” accompanied by several “musicians” of questionable talent! Two dancers dressed in lovely traditional garb did their best to keep the audience’s attention as we leaned back on the low comfortable couches, with their many bolster cushions, while a lone candle was the only source of illumination in the black night of the desert. After ordering (and returning) the most pitiful excuse for wine, we moved “up the hill,” (sand dunes) to the dining tent where we enjoyed a luxurious seven-course “curried everything” meal. After a surprisingly comfortable sleep on top of a three-inch mattress over a wooden board for support in a tent with only two fans, no AC and no WIFI, the morning brought us to our breakfast with no curry in sight. After breakfast, we hopped aboard our Safari jeep for a ride into the desert once again. 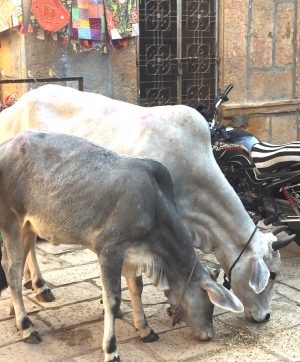 Our guide’s name was Kumba. His sinister appearance seeming a paradox to his sweet disposition, he proceeded to expertly drive us up and down the sand dunes, some of which were well over 20 feet high. As Pearl white-knuckled her way through the ride, Kumba seemed to enjoy all the “photo ops!”

Living in a tent in the middle of the Thar desert is not really my idea of a vacation, but God uses all things for His glory if we are alert to listen and to observe. In the midst of this parched but exciting two-day adventure, I found myself often chatting with our house servant, Lachshme, a young student earning his way through university by attending to the needs of guests at the camp. As I learned more about Lachshme’s dreams of becoming a prosperous hotelier someday, my heart went out to him with the best gift I could give him: the Bible verse of hope and promise; Jer. 29:11. Once again, I was met with an openness to the Word of God, something not found in many parts of the USA. 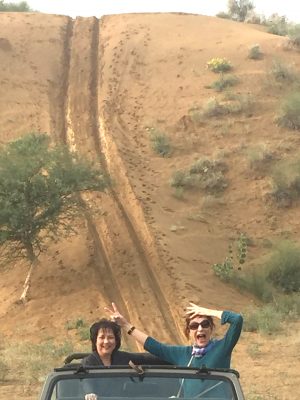 Some 102 miles away sits the golden city of Jaisalmer, featuring the towering Jaisalmer Fort, standing high atop a hillside. The nearby Maharaja Palace Museum beckons visitors to experience ancient royal artifacts, complete with kingly transports that carried royals wherever they wished to go. Jaisalmer is called the “golden city” because it was built on the ridge of yellowish sandstone. Sitting in the heart of the Thar desert, it beams with sunlight, a golden hue enveloping the entire city.

I can only imagine the obstacles that must have been overcome to build a quality hotel in a country like India, especially in Jaisalmer, a city that for at least six months each year is almost desolate and bereft of tourists. However, that is exactly what our hotelier, Bidapna, and his brother did! When talking with him and his dream to overcome the poverty of the city, I couldn’t help it — I shared Jer. 29:11 with him, too. Giving him encouragement and hope with God’s Word was one of the biggest blessings of my stay in Jaisalmer. This was my fourth encounter with sharing the one true God’s Word with someone of the Hindu religious tradition, which believes in hundreds of gods. 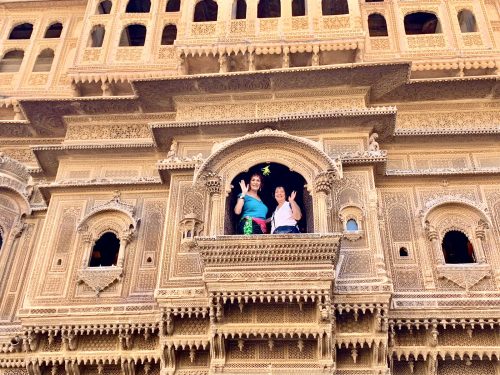 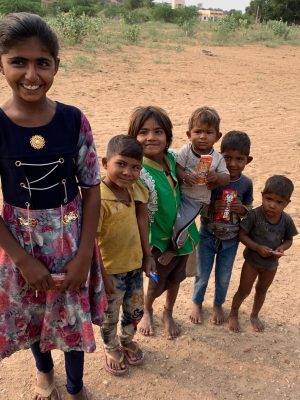 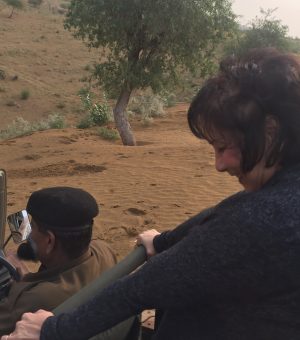 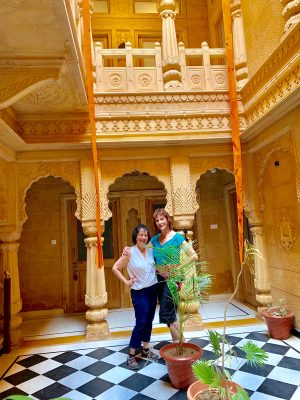