Marmaduke has finally ‘left the building’

After more than two years at C.A.R.E., Marmaduke has finally ‘left the building’

Volunteers and staff at the Critter Adoption and Rescue Effort no kill animal shelter in Ruskin were overjoyed March 20 when one of their longtime residents finally found his forever home.

Marmaduke, a 3 ½-year-old mastiff mix, was found tied to the shelter’s fence in August 2017. Only 1 at the time, he was an emaciated, intact 58-pound puppy who had mange, fleas and intestinal parasites.

Marmaduke’s demodectic mange was treated, and he was neutered by C.A.R.E.’s medical team. By day, he lived in a large outdoor run and at 3 p.m. was taken inside to have dinner and sleep in a comfy bed. 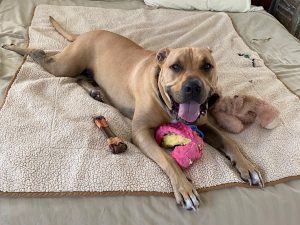 SIMON STRUGNELL PHOTO
Marmaduke, a young mastiff-mix puppy left tied to the fence at the Critter Adoption and Rescue Effort Shelter in Ruskin in August 2017, lies happily in his new, forever home, thanks to Scott and Marcia Strugnell, of MiraBay.

Before long, the big lug weighed a healthy 100.4 pounds.

“But out of the run, holy cow!” said Gloria Blue, the shelter’s longtime animal care manager. “He was rambunctious and undisciplined, a real handful. He’d get so excited around people that he’d get mouthy. I made it mandatory that two people had to walk him.”

Blue said Marmaduke was “the reason we initially hired a trainer to come out to teach our volunteers how to handle a dog like him. Even she was initially intimidated by him. The trainer asked Blue and volunteer Kristinn Green to go into his run and demonstrate her techniques.

Eventually, most of the volunteers were comfortable with him. “It was a matter of redirecting undesirable behavior into positive behavior,” Blue said.

Marmaduke’s size and his boisterous personality made people looking to adopt pass him by. That is, until Simon Strugnell and his wife Marcia came along.

They gave him a chance 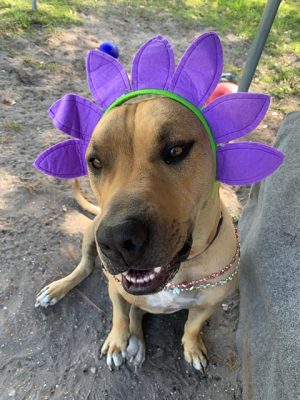 KRISTINN GREEN PHOTO
Once unruly and undisciplined, Marmaduke calmly sits for a photo to be posted on C.A.R.E.’s Facebook page, where hopefully someone will see him and offer him a chance to have a permanent family and home.

The MiraBay residents had always had big dogs. In fact, Marmaduke was small in comparison.

They learned about him from Melinda Brown, a neighbor and C.A.R.E. office volunteer, who took photos of the dog and his bio home. They had recently lost their big Neopolitan mastiff, so they decided to check Marmaduke out.

“When they came to meet him the first time in February, they stayed outside his cage and then went with him to the shelter’s big backyard for 45 to 60 minutes,” Blue said. “We told them it would be a process getting to know him, so they kept coming back.”

“I came weekly on Tuesday, Thursday and Saturday, and Marcia came on Sunday,” said Strugnell, 52.

It got to the point that when Marmaduke saw Simon coming and heard his voice, he would sit still with his ears back, wagging his tail, Blue said.

Eventually, Strugnell began taking the dog for walks off property, then put Marmaduke back in his run and got treats out of his vehicle. 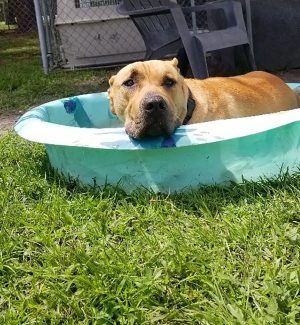 KRISTINN GREEN PHOTO
Marmaduke cools off in a kiddie pool at C.A.R.E., while waiting for someone to give him a chance. As an abandoned puppy left at the shelter, he was emaciated and had mange, fleas and intestinal parasites. He left the shelter March 20 as a healthy, 3-1/2-year-old, 100-pound dog.

“Honestly, I could quit working today, and this would be the highlight of my career,” Blue said. “None of us thought he would ever get adopted; we thought he’d be with us forever.

“When I brought Marmaduke inside for his final weigh-in, he was calm and wagging his tail. He knew he was going to his new home.”

After being chained to its fence and then spending 2 ½ years at the shelter, the once unruly pup left C.A.R.E. a polite and well-mannered dog.

“He’s the littlest dog we’ve ever had,” Strugnell said. “He’s like a little lap dog to us. We refer to him as ‘little fella.’

“He doesn’t pull his leads like he used to,” Strugnell noted, after taking Marmaduke home. “He likes getting out and about and enjoys all the new sights, smells and sounds. He loves giving kisses, enjoys his treats and has his own bed. He’s as happy as he can be.” 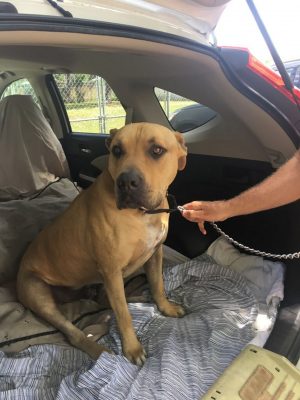 GLORIA BLUE PHOTO
Marmaduke looks back at his former home at C.A.R.E., as his new owner, Simon Strugnell, readies him for travel to his new home in Apollo Beach. His caretakers at the shelter were overjoyed about his adoption. 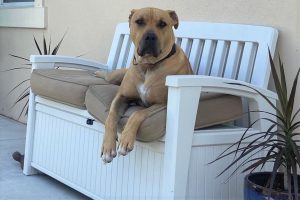 SIMON STRUGNELL PHOTO
Marmaduke looks like he owns the place at his new home in MiraBay. His owners, Simon and Marcia Strugnell, visited him several times a week, beginning in February, before adopting him March 20.