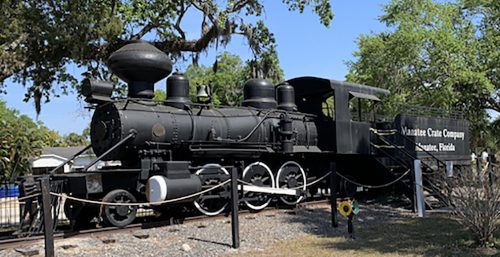 CARL MARIO NUDI PHOTO
The Baldwin Locomotive Works in Philadelphia built old Cabbage Head in 1913. After about 30 years of moving timber in Northern Florida, it was brought to the Manatee-Nocatee Crate Company in 1948. The Manatacee County Historical Society purchased the locomotive in 1954, saving it from the scrap yard, and it’s been a community landmark ever since.

After more than 40 years of pulling train carloads of lumber and timber and another nearly 70 years of being a community landmark, the locomotive “Old Cabbage Head” is due for another restoration.

The Manatee County Historical Commission, the fundraising group for the Manatee Village Historical Park, 1404 Manatee Avenue East in Bradenton, where the locomotive now rests, has a community campaign to raise the money for a protective shelter and to do the restoration. 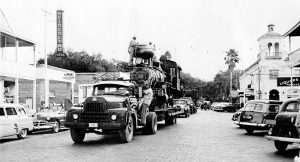 MANATEE COUNTY LIBRARY PHOTO
Old Cabbage Head was moved to a prominent location near the Green Bridge in 1954. It traveled down Manatee Avenue and passed by the Arcade Drug Store, shown in the background on the right.

“The Old Cabbage Head was moved here in 2002 at the time it was restored,” said Kathryn Rohlwing, supervisor of the Manatee Village Historical Park, “but since then the Florida sun and rain were pretty brutal to the historical structure.”

The fundraising will be a two-phase campaign.

“It’s split into phases,” Rohlwing said. “One to build the (shed-like) covering and phase two to have the conservation work done.”

The locomotive and fuel car, built by Baldwin Locomotive Works in Philadelphia, originally were used as a logging train for the Taylor County Lumber Company in the Big Bend area of Florida.

It was sold to the Brooks-Scanion Lumber Company of Foley, also in Taylor County, and after 35 years of hauling lumber across northern Florida, the locomotive was sold to Manatee-Nocatee Crate Company, located at 15th Street and Ninth Avenue east, in 1948.

It picked up the nickname of “Old Cabbage Head” because it featured a ballooned smokestack known as a “cabbage” stack.

The locomotive transported timber from Pine Level in Eastern Manatee County to the mill in East Bradenton to be manufactured into produce crates. When the crate company closed in 1953, Old Cabbage Head was to be sold for scrap.

The Manatee County Historical Society held a fund drive and raised $900 to purchase the locomotive and fuel car in 1954. Volunteers restored it, and Old Cabbage Head was placed near the South Florida Museum, now the Bishop Museum of Science and Nature on Ninth Street West. It remained there for 30 years, greeting visitors as they crossed the Green Bridge into Bradenton. 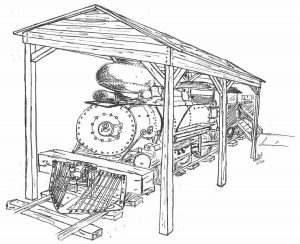 PROVIDED PHOTO
To give the Manatee County Historical Commission, the fundraising board of the Manatee Village Historical Park, an idea of what the restoration project would look like, Alex Rohlwing drew a sketch.

“About three years ago we noticed rust gaining on the structure (locomotive) and knew that something needed to be done,” said Phaedra Dolan, then supervisor at the historical village, now director of the Manatee County Clerk of the Court and Comptroller’s Office Historical Resources Department.

“We told the historical commission since the steeple restoration project had been completed, it was time to turn its attention to Old Cabbage Head and preserve it for the future,” Dolan said.

The steeple project was a fundraising campaign the historical commission had undertaken to restore the steeple on the 1887 Old Meeting House in the park.Early in 2012, an inspection determined that the steeple had become the victim of termites. The community rose to the occasion, and the $75,000 needed for steeple restoration was raised.

With a successful steeple campaign, the commission took on the Old Cabbage Head restoration project. “Two commission members, Andrea Canise, (who is still on the commission) and Catherine Ferrer, (who termed out of her commission post) stepped up to assist in developing the campaign,” Dolan said. “They were instrumental in spearheading the campaign, creating the initial graphics and doing a lot of the research.”

To get the project started, the office of Angelina “Angel” Colonneso, the Manatee County Clerk of the Circuit Court & Comptroller, provided the funding to hire the Ugarte and Associates architectural firm in Palmetto to draw up the design and specifications for the phase one shelter covering.

Phase one will cost somewhere between $60,000 and $120,000 to complete, Rohlwing said. Bids were received from three construction companies, and the historical commission will open them when the COVID19 situation permits it to meet again. 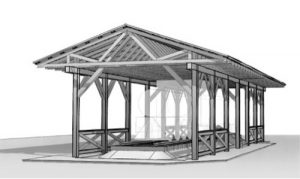 PROVIDED PHOTO
The Palmetto architectural firm Ugarte and Associates did the design and specifications for phase one, a covering structure, for the restoration of the Old Cabbage Head locomotive at the Manatee Village Historical Park in Bradenton.

Rohlwing said the commission does not have an estimate for the restoration phase of the project, but it could cost as much as $150,000. “Our goal is to have it be open again to the public,” she said. “Right now it’s closed because it’s structurally unsafe, but when the conservation process is finished, people will be able to go up into the cab as they were able to before.”

To donate to the campaign, checks may be made out to the Manatee County Historical Commission, Inc., or MCHC, and mailed to Manatee Village Historical Park at 1404 Manatee Ave E,, Bradenton, FL 34208. Donations can also be made online at: www.manateevillage.org/get-involved.