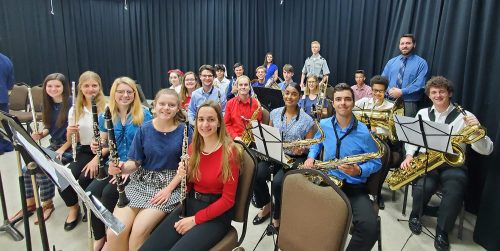 If you missed the Massing of Colors event March 8 at Community Hall in Sun City Center, a video is available for viewing on YouTube.com (search Massing of Colors 2020). It will be well worth your time. The ceremony was a moving rededication to country and flag with participation of about 75 flag bearers representing 30 military, public safety, scouting, JROTC, first responder and service organizations. 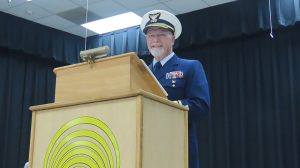 Also included on the program was recognition of the 75th anniversary of the flag raising at Iwo Jima on Feb. 23, 1945. Ed Mahoney, a veteran Marine who participated in the Iwo Jima landing and battle, was named grand marshal.

The event was emceed by Ronald Silva, rear admiral, U.S. Coast Guard (Ret.). The Newsome High School band performed renditions of Stars and Stripes Forever, The National Anthem and The Thunderer. Following the ceremony, the flag bearers exited the hall to the Veterans Memorial where they formed a circle around the perimeter.

Organizer Marine Major (Ret.) Jim Haney said the Sun City Center Chapter of the Military Order of the World Wars (MOWW) was reviving a Massing of Colors ceremony that had not been held in a while. “We were proud to host an extremely well-executed patriotic event that we had hoped would be better attended, but we hope to present opportunities for future ceremonies,” he said.