Dolores Berens passes away at 92

One of Sun City Center’s most dedicated volunteers passed away March 16, succumbing to cancer at age 92 at Sun Terrace. 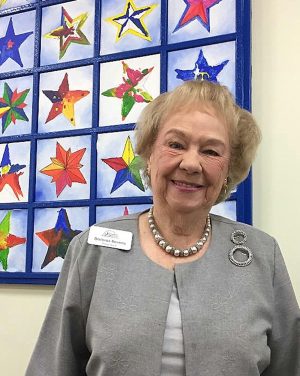 For more than 30 years, Dolores Berens was known in the community for her selfless work on behalf of Alzheimer’s patients and their caregivers. “Her desire to help people was overwhelming. It was her passion,” said her longtime friend, Georgana Collins, Hanson Services administrator. “There wasn’t anything she wouldn’t do to help someone in need. Rules went out the window when it came to that.”

Lee Leverett, who worked closely with Berens for 17 years at Samaritan Services, agreed. “Dolores was 24/7,” she said. “Even in the middle of the night, she’d take calls and actually pick up Alzheimer’s patients at the hospital to take them home for care. Caregivers used to call her sometimes just to unload.

“She was an amazing lady, a pleasure to work with,” Leverett added. “And she was truly dedicated to the people she helped.”

Dolores Cosby was born Nov. 20, 1927. Originally from the Bronx, NewYork, she lived there until she was in her early 40s. She married Edward Tucciaroni in 1945, after he returned home from the Army at the end of World War II. The Purple Heart recipient had fought in the Battle of the Bulge and D-Day. The couple had two sons, Mark, a proud Vietnam War veteran, and Ed Jr. The family moved to Ridgefield, New Jersey in the late ‘60s, so Ed, their youngest son, could go to a better high school.

Dolores was “a real-life Cinderella,” said Ed, a resident of St. Louis, Missouri. “My brother (who lives in Wallington, New Jersey), and I were very proud of her. She was born into poverty, her parents divorced when she was young and she was raised by her grandparents.

“As a child, she actually fed the furnace of the building, where they were superintendents,” Ed continued, adding his mother barely went to high school but worked her way up in administrative positions until she ultimately became a general manager for the Carrier Corp.

Ed Sr. died in 1978, and the following year Dolores wed her second husband, Maurice Berens, whom she met during dance lessons. He had two sons, Steven and Michael, from a previous marriage.

Maurice and Dolores moved to Sun City Center 33 years ago, after Dolores retired from the Carrier Corp.

In the mid-1980s, she helped Doris Ragland found the Alzheimer’s Support Group, which met monthly until about two years ago, to provide caregivers with moral support and information. It was the first and only group of its kind at the time.

Several years later, Delores founded the Samaritan Alzheimer’s Auxiliary, which today provides free respite for caregivers of people with Alzheimer’s for up to 50 hours of time away for self-renewal. Until her passing, she remained its president.

“She was very kind, loving and hardworking,” said Dorothy Carlson, a friend and neighbor who knew Dolores for 20 years. “She absolutely loved being an advocate for people with Alzheimer’s and the people who cared for them.”

On a personal note, Dolores Berens, who was always “dressed to the nines,” loved the opera and swing dancing. She was a longtime parishioner of Prince of Peace Catholic Church and a two-time president of the GWFC Sun City Center Woman’s Club. In addition to her sons and stepsons, she leaves behind five grandchildren and three great grandchildren.

Dolores will be interred beside Maurice, who passed away from an Alzheimer’s-related illness in July 2004, in Myrtle Hill Memorial Park, Tampa. The family asks that any donations be made in Dolores’ memory directly to the Samaritan Alzheimer’s Auxiliary, 1207 N. Pebble Beach Blvd., Sun City Center 33573.