Give your input on Parrish Village plan

Residents have another opportunity to give input on Parrish Village plan

Residents of the Village of Parrish have another opportunity to express how they would like to see their community develop. The Manatee County Neighborhood Services Department has posted a survey on its Speak Up Manatee website. The survey asks three questions about the Parrish Village Neighborhood Action Plan:

Do you agree with the plan?

What do you like the most about the plan?

Is anything missing from the plan? 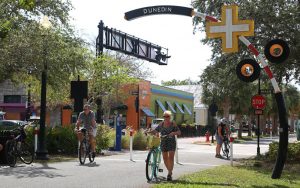 Before taking the survey, residents can review a summary of the more than 130-page Parrish Village Neighborhood Action Plan that the Manatee County Board of Commissioners contracted Mellgren Planning Group to write. The summary and survey can be accessed on the Internet at www. speakupmanatee.com.

“The plan is a document to guide the county,” DeLeon said. “With development happening all around (the village), we don’t want Parrish to be left behind.”

Gretchen Fowler, president of the Parrish Civic Association, said she was glad the survey was underway. “We’ve been waiting for the survey for what seems like a year,” Fowler said.

Althea Jefferson, city planner and senior associate with Mellgren, first met with the community at a Parrish Civic Association meeting in January 2019 to gather more input for the action plan she was contracted to write. The county commissioners hired Mellgren, a Fort Lauderdale-based urban planning and consulting firm, in the fall of 2018, and at the community meeting, Jefferson presented facts and statistics she had put together from research about the village. Through input-gathering exercises, those attending the meeting had the opportunity to prioritize what they thought the action plan should contain. 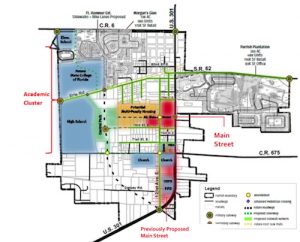 For Fowler, the commission adoption of the NAP will be the catalyst to transform Parrish into A more vibrant community. “Once the plan is adopted and made formal, we’ll see some movement forward with the concepts in the plan,” she said.

The plan covers an area of about 2,100 acres, roughly bounded by Moccasin Wallow Road on the north, U.S. 301 on the west, Martha Road on the east, and Lexington Drive and U.S. 301 on the south. This area, referred to by residents as the Village, includes most of the older residential homes, the main retail strip along U.S. 301, the new schools, two approved developments, Parrish Plantation and Morgan’s Glen, and a proposed county park.

One business district has been suggested for along 121st Avenue East at the south end of the study area near the Parrish Post Office and the Parrish Fire District station. The other shopping area, referred to as the Main Street anchor, has been proposed for mostly undeveloped land stretching from U.S. 301 to about 118th Avenue East, north of 73rd Street East and south of 77th Street East. Both areas are envisioned to be a walkable retail, office and restaurant business district, similar to Mainstreet at Lakewood Ranch, downtown Dunedin or Mount Dora. 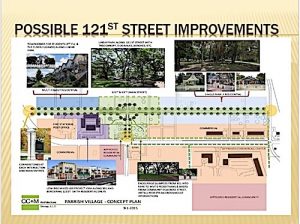 One of the two retail/office districts the Parrish Village Neighborhood Action Plan proposes is located along 121st Avenue East, near the Parrish Post Office and Parrish Fire District station.

For the NAP to be successful, it stated, “the people of Parrish Village want their community to be a place that attracts people, businesses and activities. . . .” To achieve this goal, the plan suggests creating the village as a place or destination, or placemaking. The two shopping districts and the proposed county park, labeled in the plan as the Village Central Park, will help reach that goal, the plan states.

The county commission has moved forward with developing the Central Park, located just east of the new Parrish Community High School, along the under construction Fort Hamer Road Extension.

Amenities the community has suggested for the park include fitness trails, a band shell, playgrounds and festival grounds. The plan said having public spaces, such as Main Street and the Central Park, to host arts and craft fairs, antique fairs, farmers’ markets and other events help in reaching the placemaking goal and create a destination versus merely a place to drive through on the way to somewhere else.

Fowler said she was glad that they were close to finishing the action plan. Until the county commission approves the plan, developers and landowners will not move forward with any projects, she said.

“The whole plan is good, but the hard part is getting the concept complete,” Fowler said. “We have to get people to buy into it.” 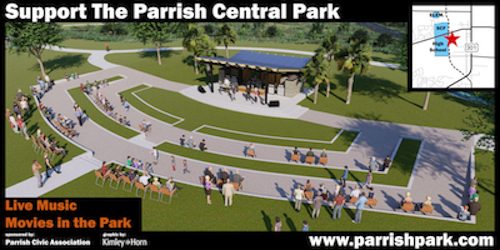 A community committee suggests a band shell, similar to what is shown in this conceptual drawing, be included in the Parrish Central Park plans.

The third goal, infrastructure improvements, takes more county involvement and funding. Several projects are already in the planning phase or are under construction, including the Fort Hamer Road Extension, which will connect U.S. Highway 301 at the south end of the village to Moccasin Wallow near the Barbara A. Harvey Elementary School.

But the plan has called for more capital improvement and infrastructure projects, including improvements to existing roads, new roads and a pedestrian circulation plan. “I like the plan, but where it needs improvement is on the transportation component. The plan said we needed better transportation, but didn’t really address it in depth,” Fowler said.

DeLeon urged other residents to give their opinion about the plan. “Do the survey and let your voice be heard,” she said. “We are listening and want to hear from you.”

The survey, along with the Parrish Village Neighborhood Action Plan summary, can be accessed on the Internet at www.speakupmanatee.com.