At his last school board meeting as superintendent of the Hillsborough County School District, Jeff Eakins was visibly moved by the board’s March 10 vote to name the Cypress Creek Elementary School media center in his honor.

In turn, Eakins, who both taught and served as principal of Cypress Creek, said it was only fitting that he accept the honor in memory of Joani Tillett, 62, of Lithia, the school’s charter and retired media specialist, who died Feb. 19. 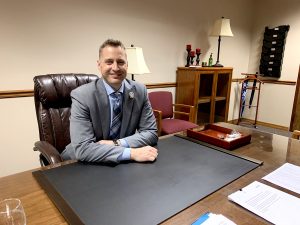 LINDA CHION KENNEY PHOTOS
Jeff Eakins, superintendent of Hillsborough County Schools, poses one last time at his desk, after his final school board meeting as superintendent on March 10.

“The amazing media specialist at Cypress Creek, who just lost her battle with cancer, Joani Tillett, I gladly accept this honor on her behalf as well,” Eakins said.

He noted in a later interview that Tillett “had a heart for reading and books” and played her role as media specialist “to perfection,” working well with students and teachers alike. “She was kind of the heart of the school,” he added, noting the media center “was a special place to go into because she was there.”

Eakins announced his retirement last June, having been hailed as a peacekeeper in a district fraught with tension, after his predecessor, superintendent, MaryEllen Elia, was fired in 2015, reportedly after a series of controversies divided the board into warring factions. The board voted 4-3 to break early from its contract with Elia, who through 2019 went on to serve as New York State Education Commissioner.

Also in a 4-3 vote, Hillsborough School Board members voted to appoint Eakins superintendent, his last position in a school district he worked in for 31 years, starting as a fourth-grade teacher at Wimauma Elementary. He taught fourth and fifth grade at Cypress Creek and succeeded the much-beloved Joe Green as principal, serving in that position from 2001-05.

Eakins credited Green for working with staff and USF educators to create a model school for technology, multi-age classrooms and other creative educational practices. “We were a school ahead of the curve,” he said. 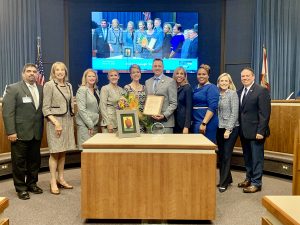 Eakins taught two years in Ohio, where he met his wife Peggy, also a long-term Hillsborough County educator, at Ohio State University. His father was a school principal, and Eakins aspired to do the same.

His early plans were to teach at the secondary level but an internship requirement at Ohio State — to intern at all grade levels — changed his mind.

“When I got to elementary school, I knew that I had found the right place for me,” he said. “I had desire to build strong relationships with my students” and to be “that teacher that made them laugh and also helped them learn.”

After teaching two years in Ohio, Eakins made his way to Florida, a self-described sun-seeking “farm kid from Ohio.”

As superintendent Eakins had his work cut out for him, as noted by school board members at the March 10 meeting.

“Boy, were those difficult decisions back then,” said Cindy Stuart, one of two board members in their roles when Eakins was appointed. “We had a lot of aspirations when we first named you superintendent, and we quickly realized that we had a lot more work to do than we thought we did.”

“You took on a financial situation that we had no idea was happening,” she added. “You’ve weathered a lot, not only with the board, [but also] with this community and with your staff. And you’ve always done it very boldly and very gracefully, with a lot of compassion for the students and certainly as a servant leader.”

During his tenure Eakins froze teacher hiring and reduced the workforce by 2,000 employees to address a general fund reserve that under Elia had dwindled by more than $200 million, threatening the bond rating that impacted the district’s borrowing. Meanwhile, school officials had to pay hefty mortgages incurred during the unprecedented school construction boom faced by Earl Lennard during his nine-year tenure as superintendent, which ended in 2005.

“At the same time, we were able to keep an eye on what was important, like increasing graduation rates,” Eakins added, noting as well his administration’s push to secure a half-cent sales tax for school construction and renovation.

According to Eakins, Lennard faced “the most challenging times” as superintendent, building and renovating 90 schools and leading through the aftermath of the 9/11 terrorist attacks.

As a teacher and a principal, “I watched Dr. Lennard do those things, and I always marveled at how he did it,” Eakins said. “It taught me a huge lesson about building relationships with people and treating people the right way, with respect. Ultimately, when I became superintendent, I remembered those things and how Dr. Lennard leveraged those relationships in the community to get through the challenging times.”

Now, faced with lingering debt just under $1 billion, the inevitable impacts of the coronavirus crisis and the pressing need to build 30 schools in 15 years, Addison Davis steps in to replace Eakins, who in turn issued warm remarks on his successor’s behalf. Davis hails from Clay County, Florida, and is the first superintendent hired from outside the Hillsborough County School District since 1967.

“He’s already learned a lot about our district and community,” Eakins said, “and he’s doing the really hard work of building up that relationship capital.”