Lifelong friends Evan Stafford and Robbie Gambrell, owners of New Wave Aluminum, started the business last August after Evan returned from Afghanistan, where he had worked in security for 10 years in the private sector for the Department of Defense. 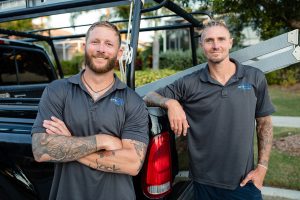 Evan Stafford and Robbie Gambrell, the proud owners of New Wave Aluminum, have a combined total of 20 years experience in the aluminum fabrication business.

The guys wanted to start their own company, but Evan had contractual obligations, so Robbie studied for and procured the licensing they needed. When Evan completed his commitment and came home last August, the pair founded their company and became business partners. Evan’s wife, Caroline Stafford, their office manager, handles marketing, permits, billing and quotes.

Both men were born and raised in Apollo Beach and graduated from East Bay High School in 2000. Stafford joined the Marine Corps that December and was sent to the Middle East as part of the 1st Reconnaissance Battalion during the 2003 invasion of Iraq. During his two, eight-month tours of Iraq, Stafford received both a Purple Heart and Silver Star.

That resulted in a book and HBO series called Generation Kill, which is based on Evan and his battalion, Caroline said.

When he was discharged in 2005, Evan got a job at Knox Aluminum, and worked alongside Robbie for four years. Then he accepted the private sector job.

“What sets them apart is their commitment and work ethic,” Caroline explained. “Evan is mission oriented and has strong time management skills. Robbie is a problem solver and very knowledgeable. They both do estimates and actually do the work,” she continued. “They don’t use subcontractors. We treat every job like we are working on our own home.”

Caroline added that the guys are also very family oriented. Robbie has two small daughters; Evan and Caroline have a son, daughter and one on the way.

“Evan and Robbie show up, they show up on time and they provide personable customer service,” Caroline said. “They ensure good materials are used in every job, and they send back anything that’s not up to their standards.”

The guys recently filmed a segment for the HGTV show, 100-Day Dream Home, which stars their lifelong friend Brian Kleinschmidt and his wife, Mika. Evan and Robbie were hired to help the Kleinschmidts with a “cool, special project” for a home they were building in St. Petersburg.

The segment is currently scheduled to air locally on HGTV April 12. The project’s a secret, so you’ll have to tune in to find out what the guys did.

State licensed, bonded and insured, the company is also a member of the Sun City Center Area Chamber of Commerce.