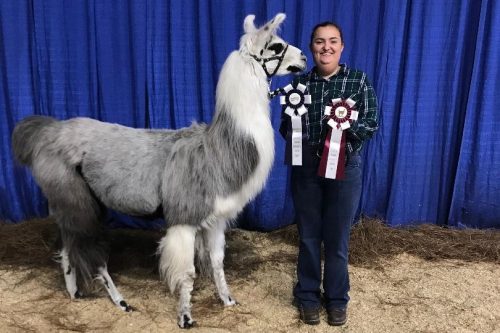 COURTESY PHOTO
Bella Wehner, 17, and her llama, Tux, won two Grand Reserve Champion awards at the recent Hillbilly Llama Classic in Georgia. It was the teen’s first out-of-state, regional competition and her second one ever.

The Hillbilly Llama Classic may have been Bella Wehner’s first out-of-state, regional competition, but you’d never know it by her recent showing Feb. 28.

After Bella completed the public relations portion of the competition, she and her llama, Tux, navigated an obstacle course together and competed with packs and halters. The pair snagged two Reserve Grand Champion awards, much to the surprise of everyone involved.

“It was amazing,” said Bella’s ag teacher and FFA advisor Lauren Van Dame. “We didn’t expect to do so well, since it was Bella’s first show of that scale and her second show ever.

“We had a great time,” she continued. “Without the community support she received, we wouldn’t have been able to go.”

“I was surprised, because we didn’t have experience (competing) at that level,” the 17-year-old Lennard High School senior said. “Tux’s behavior and how he performed was impressive.”

Bella said she was awed by the generosity of the community.

She received more than $1,000 in donations, which was well over the $600 she and Van Dame originally needed to make the trip. The largest donation came from the Ruskin Community Development Foundation, which gave the FFA Alumni $400 on Bella’s behalf. She even received a check from a customer at Publix (where she works as a cashier and bagger), who said it was from her “patrons” there.

The teen said the excess funds will go toward her next show with Tux at the Marion County Fair April 4.

“We’re very proud to have Bella and Mrs. Van Dame representing the Lennard High School FFA, with the help of Tux, of course,” said Amber Council, Lennard FFA Alumni president. “We’re looking forward to seeing what this team does at its next competition.”