The Firestone Grand Prix of St. Petersburg will be revving up across the Skyway Bridge from March 13 through March 15, but much of the planning for the annual event is taking place in an office in North Manatee County. 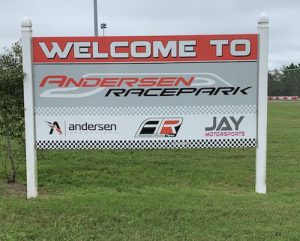 Andersen Promotions, 10101 U.S. Highway 41 N., has been organizing the Road to Indy Presented by Cooper Tires racing series at the St. Petersburg event for the past 10 years.

“It is great to open the 2020 season for all three levels of the Road to Indy Presented by Cooper Tires in conjunction with the NTT IndyCar Series season-opener (at the Firestone Grand Prix of St. Petersburg) at such a fantastic venue,” said Michelle Kish, COO of Andersen Promotions, in an email. “Green Savoree Racing Promotions has done an outstanding job of making [the Firestone Grand Prix of St. Petersburg] a premier event and is a great partner.”

Kish lives on Sneed Island and is the daughter of Dan Andersen, a New Jersey building contractor and owner of Andersen Promotions.

“With Andersen Promotions and Andersen RacePark in nearby Palmetto, [the Firestone Grand Prix of St. Petersburg] is a home race for us and one I look forward to each year,” Kish said. “It’s a chance to share the racing experience with friends and family and give them a first-hand look at what we do and, also, the opportunity to meet some of the tremendous people in our paddock.”

Kish and her brother, Mike Andersen, were race car drivers when their father owned a racing team, according to Neil van Niekerk, facilities manger of the Andersen RacePark.

In 2007 Andersen purchased the karting track, which was built in the 1990s. 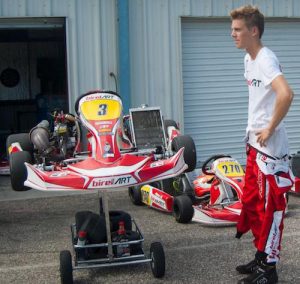 The Road to Indy Presented by Cooper Tires, which will be one of the racing series at the St. Petersburg grand prix event, is a three-level driver training program Anderson Promotions operates.

“The Road to Indy is made up of these three levels,” Van Niekerk said. “If you think of it in baseball terms, there’s A Ball, Double A Ball, and Triple A Ball.

Many of the drivers in these three race series trained at the Andersen RacePark, starting at the kart level.

The racing facility also is open to the public and has a variety of karts with a range of horsepower.

“We have different levels of karting here,” Van Niekerk said, “Everyone starts off in nine horsepower, four-stroke, and then there’s three levels above that, culminating in a stick-shifter kart, so as drivers demonstrate proficiency, they’re able to rent faster and faster equipment.”

Andersen RacePark has a six-tenth of mile track with 13 turns. 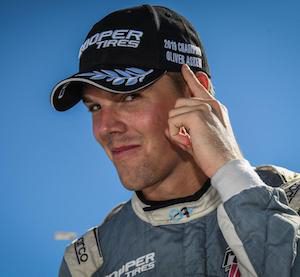 ROAD TO INDY PHOTO
Oliver Askew acknowledges the fans after winning the Indy Lights Presented by Cooper Tires Series in September 2019 while driving for Andretti Autosport.

For those younger than 16, the charge is $100 to $125, which includes private one-on-one instruction. The class and time on the racecourse take 90 minutes.

“One of the busiest times is on Thursday at noon,” Van Niekerk said. “We run our senior league for 55 and over.

The Andersen RacePark also runs a competition karting school where student drivers are introduced to competitive go-karting with on-track drills.

The typical students “usually are guys and girls that are trying to take racing to the next level,” Van Niekerk said.

One of the drivers in the Andersen Promotions IndyCar series, Oliver Askew, 23, started racing when he was 8 years old.

With the skills he learned as a young driver, Askew won kart titles in the United States and Europe. 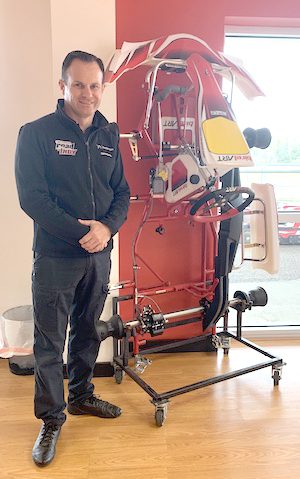 CARL MARIO NUDI PHOTO
Neil van Niekerk, facilities manger of the Andersen RacePark, stands next to a kart display in the pro shop at the Palmetto race facility.

“He didn’t win the Indy Pro 2000 series, but he did well enough to get picked up by (the Andretti Autosports racing team) in the Indy Lights in 2019,” he said.

According to motorsports.com, Askew racked up seven wins, seven poles and the title, which earned him a $1.1 million and a spot in two IndyCar races, including the one in St. Petersburg, and the Indy 500 in Indianapolis on Memorial Day.

He will be racing for the Arrow McLaren SP team at the Firestone Grand Prix of St. Petersburg.

“He’s one of ours that’s gone all the way,” Von Niekerk said.

The grand prix motor racing event, owned and operated by Green Savoree St. Petersburg LLC, has been using the streets of downtown St. Petersburg to showcase the skills of championship drivers and provide thrills to thousands of fans for 16 years, although there has been motor racing in the city that hugs the western side of Tampa Bay since 1985.

This is the 10th consecutive year the Firestone Grand Prix of St. Petersburg has been the season opener race for the NTT IndyCar Series. 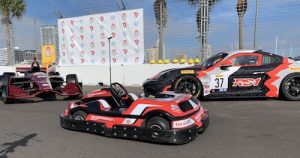 CARL MARIO NUDI PHOTO
Open-wheel and closed wheel vehicles, like the two on display in the background during a media preview day, will be racing at the Firestone Grand Prix of St. Petersburg from March 13 to March 15. The go-kart in front from Anderson Racepark also was on display.

The temporary racetrack course is a 1.8-mile, 14-turn configuration along downtown streets circling Pioneer Park, the Duke Energy Center for the Arts, The Dali Museum and along the runways at Albert Whitted Airport.

“The great atmosphere, fan support, scenic backdrop and tremendous racing make this an incredible weekend,” Kish said in an email.

For more information about Anderson Promotions and the Road to Indy Presented by Cooper Tire, visit the website at www.indylights.com.

Learn more about the Andersen RacePark at its website: www.andersenracepark.com.

And get information about the Firestone Grand Prix of St. Petersburg at www.gpstpete.com.