This year was to have been special for the SCC Community Association FunFest. The annual event would be entering its third decade, and the 15-member committee had worked all year on planning.

CA directors put health concerns first, however, and announced cancellation of the event on March 10. CA President Sam Sudman said, “We feel this is the right thing to do for all. Thank you for your understanding in this sensitive decision.” The event is not being rescheduled.
Susan Muise, who chaired the FunFest 2020 committee, said the decision was a difficult — and sad one, but with Governor DeSantis declaring a state of emergency and all the health agencies advising seniors to avoid large functions, it was necessary to acknowledge the seriousness of the COVID-19 threat. Lynne Murphy, Health Fair chair, added that since the event is open to the public, i.e., not restricted to the SCC community, it would be difficult to trace the origin should an infection occur following the event.

Muise said the committee is busy now notifying the clubs and vendors so that they can act accordingly (cancel food orders, entertainment, etc.). She said there has been very little negative feedback from the cancellation news. Everyone seems to understand, and they are looking forward to next year.

The Sun City Center Community Association is inviting everybody to join the party as the FunFest tradition enters its third decade in 2020. Nonstop entertainment and club offerings of handmade creations, raffles and food are all part of the annual event’s excitement that draws hundreds from the immediate area and surrounding communities. It’s free and open to the public. 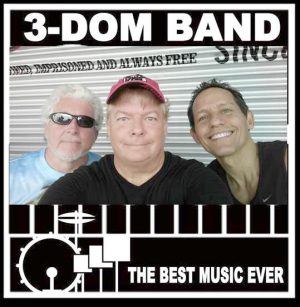 The power trio 3-Dom Band is returning to FunFest with music from such greats as Billy Joel, Elton John, The Beatles and The Eagles.

A 15-member organizing committee, led by Susan Muise, urges you to join your friends and neighbors on the Central Campus (1009 N. Pebble Beach Blvd.) for five hours of festivities on Saturday, March 21, from 9 a.m. to 2 p.m. The festivities begin with an opening ceremony at the bandstand that includes a welcome by CA and FunFest officials and the traditional raising of the flag during the National Anthem.

FunFest has been an annual day of fun in SCC since the first one was held in March 2000. Reminiscing a bit, Muise explained that it was the brainchild of then-CA director Walt Cawein, a still-active civic leader, to raise funds for more club space and to showcase the many activities that generate the unique spirit of the Sun City Center community.

In addition to CA clubs, community service groups and sponsoring businesses and organizations will be on hand to display their activities and products. In the Health Fair, numerous health care providers will be stationed in the Atrium building and just outside in the parking lot — all with useful information and some offering free services such as balance assessments, blood pressure checks, vision, BMI, blood sugar screenings and more.

New to FunFest and sure to delight is ventriloquist, magician and juggler Razzmatazz.

An impressive list of entertainers includes crowd-pleasers Bill Lindsay (aka Elvis Presley), 3-Dom Band, The Dukes and Wonders of Nature, who will be performing in the main tent (beside the Arts and Crafts Building on Cherry Hills Drive), Rollins Theater and the Florida Room. Newcomer Razzamatazz is joining the roster this year with magic, ventriloquism and juggling. CA dance/exercise clubs and several choral/theatrical groups will also be performing in the various campus venues.

Want to avoid the traffic around Central Campus? Buses (handicapped equipped) will be making continuous loops from the South Campus Community Hall, 1910 S. Pebble Beach Blvd. The first bus will depart around 8:45 a.m., and the last return from Central Campus will be about 2:30 p.m. Golf cart parking will be available in the area just north of North Course Lane.

Other things to know: This is a rain or shine event. Service animals only are allowed on campus. Park your bicycles outside the FunFest area.

Come join your friends and neighbors on March 21 for a good time. It is a great opportunity to experience the spirit of Sun City Center, a unique community with 150 clubs and organizations that always offer something to do. A TV presentation showing last year’s FunFest is now running in the Atrium.

Don’t miss the insert in the March 18 Observer News that will detail times and locations of exhibits, entertainment and demonstrations. Bring it with you.