Every year before hurricane season begins, there is a flood of information from national, state and local public safety officials on how to prepare for the possible destructive storms. 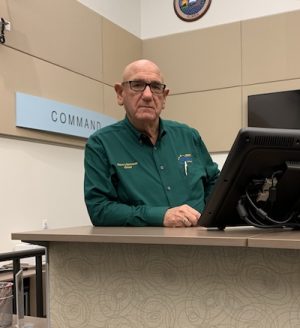 “This will be our first ever Hurricane Expo, and we’re hoping to better prepare and educate Manatee County residents on the things they need to do to prepare for Hurricane Season,” Emergency Management Chief Steve Litschauer said. “We’ll be emphasizing the importance of knowing the strength of your home, learning your evacuation level and having a hurricane kit ready.”

In an interview last week, Litschauer said his division was teaming up with the Chamber of Commerce, Salvation Army, Manatee County Redevelopment and Economic Opportunity Department and Wrightway Emergency Services to present the Expo.

“The Salvation Army had its own hurricane preparedness event for the last several years,” Litschauer said. “With them as partners, we’re hoping that we can make it even a better Expo.” 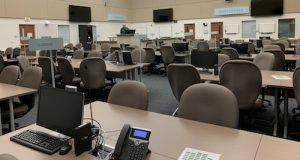 CARL MARIO NUDI PHOTO
The Incident Command Center at the Manatee County Public Safety Complex is where government and social agencies gather to respond to a natural disaster when the Manatee County Board of Commissioners institutes a state of emergency.

Although hurricane season does not start until June 1, he said the organizing team decided to hold the Expo in March.

“We picked early March for a couple reasons,” Litschauer said. “One was it would be one of the first, if not the first, hurricane preparation programs in the state for the season.

“And the second reason, and biggest, was we believe we can catch our Northern residents before they go home for the season because, normally, the programs that we present are during hurricane season, and most of the Northern folks have already gone home,” he said. “So we’re hoping to be able to educate them to have them better prepared (before they head back home).”

Whether the seasonal visitors have a mobile home, a condo or a house, there will be information for them at the Expo on what they can do to prepare that dwelling, Litschauer said. All Expo attendees will get free advice from experts in various facets of hurricane preparedness and response on preparing their homes and families. 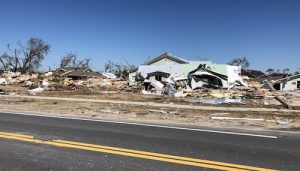 PROVIDED PHOTO
Every year Florida is vulnerable to the destruction of hurricanes, such as the Category 5 Hurricane Michael that struck the Panhandle in 2018.

As of last week, 64 vendors were signed up along with various government agencies. There will be personnel from the county emergency management division, several fire departments and law enforcement agencies and the county Emergency Medical Services.

“We’re going to have folks like the health department, Medical Reserve Corps, Manatee County Search and Rescue, the blood bank and AAA,” Litschauer said. “We’re also having the Florida Department of Children and Family Services, the county building department, the neighborhood-based Community Emergency Response Teams, or CERT, and the American Red Cross.”

There also will be insurance companies and building and construction firms, such as roofers, windows and doors suppliers, HVAC companies and plumbers, as well as generator and battery sellers. 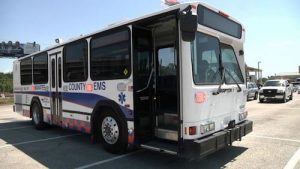 PROVIDED PHOTO
Manatee County Emergency Medical Services will have its RAPTOR, Rapid Activation Patient Treatment or Rehab, mass-causality vehicle on display at the Hurricane Preparedness Expo at the Bradenton Area Convention Center in Palmetto on March 5.

“Also, Mr. Handyman will be there; he can help with putting up shutters and other jobs around the house to prepare for a hurricane,” Litschauer said.

For the children, large emergency vehicles will be on display within the exposition hall.

“We picked 3 p.m. to 8 p.m. (as the hours for the Expo) so that the retirees who don’t like to get out at night too much would like the three to five time period, and then at five o’clock on the working folks and their families would come,” Litschauer said. “Those vehicles are the things that pulls in the kids.”

The AmbuBus can be used to treat seven patients on stretchers and five sitting patients. This vehicle can be used for vehicle crashes, mass shootings or natural disasters.

It also can be deployed at large events, such as road races where several runners can be treated for heat exhaustion at the same time. 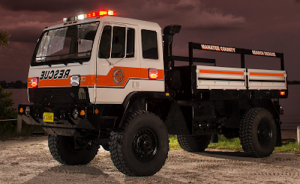 PROVIDED PHOTO
Manatee County Search and Rescue, an all-volunteer nonprofit organization, will have its high-water rescue vehicle on display at the Hurricane Preparedness Expo at the Bradenton Area Convention Center in Palmetto on March 5.

Another impressive piece of equipment that will be on display will the Manatee County Search and Rescue high-water rescue vehicle. According to Search and Rescue literature, the light military tactical vehicle “is capable of transporting stranded individuals out of hard to reach areas. “Whether the victim is in the woods or stranded in a flood, this vehicle can be used to get them,” the brochure states.

The Expo also will offer a slate of speakers starting at 3:30 p.m. until 7:15 p.m. These speakers include

• Dan Noah, with the National Weather Service in Ruskin;

• Phil Baker, with the Boyd Insurance Agency in Bradenton.;

• A representative from FPL.;

• Diane Kacmarik, a meteorologist with Spectrum Bay News 9; and

• Nigel Baker, who is a member of Region 7 Incident Management Team. Baker will talk about his experience in the Bahamas with Hurricane Dorian.

Category 5 Hurricane Dorian struck in Elbow Cay, Bahamas, with 185 mph winds Sept. 1. Several hours later it made landfall on Grand Bahamas and stalled over the island nation for about a day. The hurricane left at least 70 dead, with about 282 people missing. Damage to the island of about 400,000 people was $3.4 billion.

The speakers at the Expo will be scheduled through out the event, and door prizes will be given to encourage attendance.

“Each vendor is providing a door prize of $25 or more in value, and at the end of each speaker presentation, we will pull tickets for the door prizes,” Litschauer said. “We probably will have eight to ten door prizes per speaker to get the people to come in and listen to the speakers.”

Litschauer has 47 years in public safety work. He began his career working in law enforcement with the Bradenton Police Department and the Manatee County Sheriff’s Office, much of that time in the Emergency Services for the sheriff’s office. He has been chief of the Emergency Management Division since September 2018.

In October 2018 Litschauer led a team of Manatee County employees to the Florida Panhandle to assist in the recovery efforts after the Category 5 Hurricane Michael made landfall on October 10 at the town of Mexico Beach.

To find more information about the Hurricane Preparedness Expo, visit the website at www.mymanatee.org or call 941-748-4501 for.

Paws for a Cause is a hit