Manatee County will soon lose one of its major historical assets. 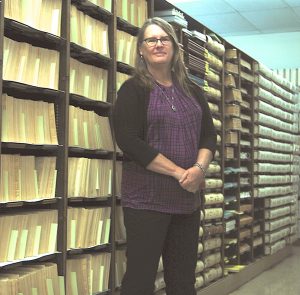 CARL MARIO NUDI PHOTOS
Manatee County Clerk of the Circuit Court Historical Resources Department Director Cathy Slusser, standing in front of a rack of county records dating back to 1855 at the Manatee County Historical Records Library, 1405 Fourth Ave. W., in Bradenton. She will be retiring Feb. 28 after 36 years with the department.

Cathy Slusser will retire on Feb. 28 after 36 years with the Manatee County Clerk of Circuit Court’s Historical Resources Department.

Slusser has been the director of the department most of those years and has been the guiding force in its success.

The late R.B. “Chips” Shore, the county clerk from 1974 until he died in 2014, started the department after a call for help from local citizens working to preserve Manatee County’s history.

Slusser became the first employee of the new department when she was hired to manage the Manatee Historical Village on Manatee Avenue East.

“Cathy is a versatile and amazing person,” Manatee County Clerk and Comptroller Angelina M. “Angel” Colonneso wrote in an email. “She cares deeply about the history of this county and making sure that all of our residents, both young and old, have access to the rich stories that are told through preservation of our historical artifacts, documents, landscapes and structures.

“Those who know Cathy know what a treasure she is to our community, and I cannot thank her enough for her service,” Colonneso continued. “She will certainly be missed. I wish her a very happy retirement.”

To fill Slusser’s position, Colonneso promoted Phaedra Dolan, who was the supervisor of the Manatee Historical Village.

As a second generation Floridian, the seed for Slusser’s love for history was germinated with the reading of the historical fiction of Eugenia Price. 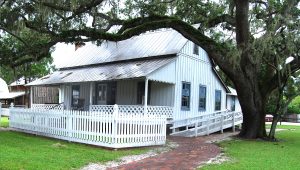 Throughout her years with the county, Slusser worked to present Manatee County’s history through the stories of the people who lived that history.

She even authored several historical fiction novels, including a trilogy of three generations of the Atzeroth family.

During an hour-long interview at the Manatee Historical Records Library, we sat down with Slusser, so she can tell her own story.

Tells us a little about yourself

I was born in Gainesville, Florida. I’m a second generation Floridian, as my mother was born in Polk County. My dad was at the University of Florida when I was born. He was there on the GI Bill, and when I was about two, they moved to Pinellas County where I grew up. We lived there until 1979 when my parents moved to Terra Ceia Island while I was in college.

About two years after my husband Glen and I married, we also decided to move to Terra Ceia, and we’ve been there since 1983.

Glen and I met in the nursery at the St. Petersburg church our families attended, so we had known each other growing up.

(They have two sons, Robert and Timothy, who is married to Miranda.)

I had a great childhood. It was in South St. Petersburg and the area wasn’t all that developed, so we would run in the woods and play games, and it was just great.

I came to Manatee County often because both sets of grandparents lived here.

My paternal grandparents moved to Anna Maria in 1947, and my father spent his teenage years on the island. 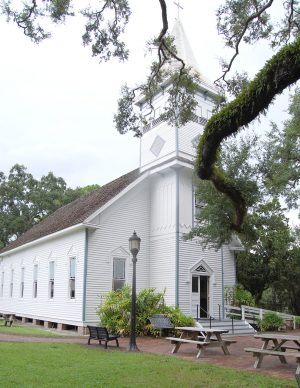 Historical Resources Department Director Cathy Slusser’s office was first located in the 1887 Church when she started work in May 1984 as the coordinator of the Manatee Village Historical Park. After the Wiggins Store was added to the park, her office was moved to the upstairs of that historical building.

Were you interested in history as a young girl?

No. When I was in middle school, I hated history. I had a teacher who made us memorize a list of the names of presidents in the order of their terms of service and the dates of their terms, and I just thought history was incredibly boring.

But I was a very precocious reader. I loved to read, and I was reading some romance novels in middle school [and] junior high then, when my Sunday school teacher saw what I was reading.

This was really not appropriate for a middle schooler. They had the bare chested man and the half-dressed lady on the front cover. So she gave me some historical fiction by a woman named Eugenia Price, and they were all centered on St. Simons Island and St. Augustine. I loved the books. They were very exciting and as good as any romance novel I had been reading.

My father, seeing my interest in those books, took us on a family vacation to St. Simons Island. As I was walking around Christ Church there and looking at the tombstones, I saw the names of the people in the book, and it just clicked that these were real people. This was history that I was loving, but because of the way the history had been taught to me prior to that time, it [had]made me not appreciate the past.

History (as presented in Price’s novels) was about stories — collecting stories and telling those stories — and so, that’s when I decided I wanted to be a historian. I still hated history the way it was taught in high school, but by the time I got to college, I had some wonderful professors who really were engaging and good story tellers.

What was your first job after college? 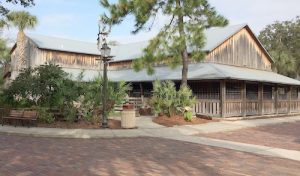 I was working at a bank and I hated it, but I was doing some freelance historical research.

Now I tell young people that even if (they have) a job they hate, to do it well because that job could be what will lead them to their next job.

That was what happened to me. I was doing freelance research here (at the Manatee Historical Records Library), and the librarian took me over to the courthouse to introduce me to Mr. Shore, her boss. Mr. Shore hired me on the spot to do historical work (for the Historical Resource Department he wanted to start).

One of the reasons was because I had worked at a bank: I could balance money, and I could do deposits and checks (for the historical groups the department would work with).

So that bank experience turned out to be what helped me get the job that I have loved for 36 years.

What was your first job with the Historical Resources Department?

I went out to Manatee Historical Village in May of 1984 (as coordinator), and I’ve been with historical resources ever since.

The village at that time was eight years old, and it just had the three buildings, plus a restroom-maintenance combination, and I was thrilled.

I was given a key to all of these historical buildings, and every morning I would get to open them up and smell that unique musty old smell, and it was just so exciting to me.

That was what I had wanted to do ever since I was in middle school.

In 1989 I became a supervisor because we had started hiring more staff.

Then in 1993 we started adding other (historical assets) such as the Palmetto Historical Park, then the Maritime Museum at Cortez, and then the Agricultural Museum, and I became a director.

The Historical Resources Department grew under the leadership and inspiration of Mr. Shore, and I am so happy that Angel Colonneso, Clerk of Circuit Court and Comptroller, not only supports our work but is determined to keep our museums and missions alive in the future.

She has inspired us to make the museums more a part of the communities that they serve by becoming more diverse and also by participating in literacy initiatives.

What do you think was your biggest accomplishment in your career with historical resources?

I think the starting of History Fair, what is now History Day.

For each student who brings in an entry to History Day, I envisioned them as myself.

If I had had a teacher who taught me about the research, the collection of the stories, the photographs and the artifacts, I would have loved history when I was in school. But that’s not the way I was being taught, so I think that’s why that program is so important to me.

How did you come up with the idea for History Day?

While I was in graduate school at USF, I heard about a history fair they were doing in California.

When I interviewed for the job with the clerk’s office, I mentioned at the time that that’s something I wanted to see happen.

We started the History Day in 1986. We had maybe five students, and over time it’s grown. We’ve been very successful in years past at the state level and have had kids win in Washington at the national level.

What do you like to do when you are not working, and what are your plans after you retire?

I like to quilt. And I’m a voracious reader. I usually have four or five books going at the same time. I also enjoy writing.

And the thing I do most often now is dog training with my two dogs.

Also, my husband and I love camping. We have a travel trailer; we’re leaving on March 18 and we won’t be back until the middle of November. We’re going to see every state in the continental United States and, hopefully, every national park.

It’s a fulfillment of a lifelong dream. And we’re taking the dogs with us.