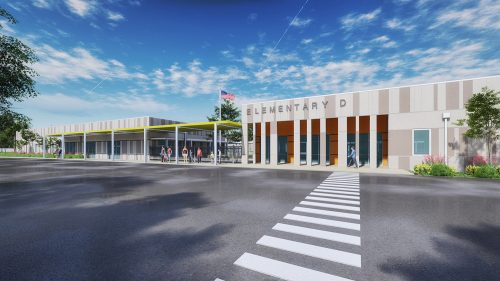 An artist’s rendering of Elementary School D shows the parent drop area in the front of the school. The new school will be located in the Belmont community on U.S. 301 near C.R. 672, just south of Riverview, east of Apollo Beach and north of Ruskin and Wimauma.

Set to name the elementary school under construction in the Belmont community on U.S. 301 near C.R. 672, Hillsborough school board members at their Feb. 4 meeting voted instead to throw a new name into the mix after several speakers stepped up to support “Joe Green Elementary.” 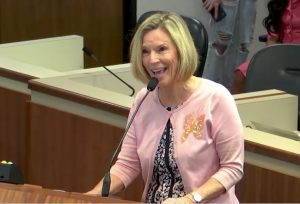 Retired teacher Ellen Kleinschmidt speaks in favor of naming the new school in the Belmont community in honor of her former Cypress Creek Elementary School principal, Joe Green. Kleinschmidt, a music teacher, was named Hillsborough County Teacher of the Year in 2005.

As a result, naming “Elementary School D” has been pushed back to the Feb. 18 school board meeting, after a 4-2 vote added Green’s name to the list of 46 recommendations, including “Belmont Elementary.”

Set to open in August 2020, the new school, at Gate Dancer Road, west of U.S. 301, is designed to relieve Doby, Cypress Creek and Reddick elementary schools in Apollo Beach, Ruskin and Wimauma. Additionally, boundary adjustments have been made for Corr, Summerfield Crossings, Thompson and Wimauma elementary schools. 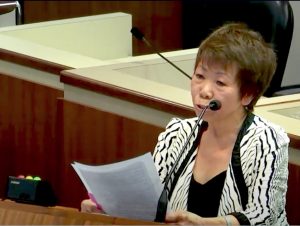 Suzie Vong McCracken speaks in favor of naming the new school in the Belmont community in honor of Joe Green, who served as principal for both Ruskin and Cypress Creek elementary schools.

“We had three people come tonight for Mr. Green, “Hahn said, at the Feb. 4 meeting. “We had over 60 people at Shields who wanted Belmont.” Noting the widespread attendance area for the new school, “It’s important for neighborhoods to feel like they have an identity,” she added.

In response to board member Steve Cona, who pushed for a Feb. 4 vote, Hahn argued her constituents need time to voice their opinions after the addition of a new name for consideration. “I don’t appreciate trying to push a name through tonight,” she said. “I find it actually pretty insulting.”

After Snively acknowledged Hahn’s concerns, the board voted 4-2 to push the vote back after adding Green’s name to the list, with board members Cona and Tamara Shamburger dissenting. Before the vote, Shamburger expressed concern about “creating unfair precedence” in the process of naming schools, noting her concerns about the Oct. 15 naming of Jule F. Sumner High School in the Balm/Riverview area.

With 492 suggestions, South Shore High School topped the community input list, with additional geographic locations noted as well, including Balm (46), Wimauma (12) and Bullfrog Creek (12). [Joe] Sumner received five recommendations, and a push from Snively after speakers in favor of “Jule F. Sumner” spoke up at the Oct. 15 meeting.

The policy for naming schools was last revised Oct. 15.

“I expressed some concerns about Sumner, and essentially disregarding the community and what they wanted the name to be,” Shamburger said, at the Feb. 4 meeting. “I just want to make sure that we aren’t again setting that precedence” and that “we should have some fidelity in the process.”

In her remarks, Snively noted Green was not on the original Elementary School D list, but that she had heard from people in Ruskin in January who valued his consideration. She noted that “every school naming that we’ve had in the past five years has had Mr. Green’s name on it, so for whatever reason, I don’t know why, this particular [naming] window was not large enough for people to realize what was happening to get his name in on time.”

Speaking in favor of Joe Green Elementary School, Ruskin resident Suzie Vong McCracken called Green a “super good principal,” who had an “eye for outstanding teachers” and “helped so many kids.” Barbara Tyler, a long-time Ruskin resident, noted Green’s deep-seated south county roots and his strong involvement with the community.

Ellen Kleinschmidt, Hillsborough County Teacher of the Year in 2005, said she worked with “many excellent principals, but without a doubt, the principal who made the biggest impact and influence on my career as a music educator was Mr. Joe Green.”

Green worked as a teacher and acting principal at Mango Elementary and as principal and charter principal of Ruskin and Cypress Creek elementary schools, respectively.

“Cypress Creek was a model school where excellence blossomed, a place where many teachers learned their trades,” Kleinschmidt said. “Many of Mr. Green’s former teachers have gone on to become principals, district leaders and even Hillsborough County’s current superintendent of schools, Jeff Eakins.”

Stewart, 84, is recognized as the first African American assistant public defender for the 13th Judicial Circuit in Hillsborough County.

To comment on name suggestions, email school.name@sdhc.k12.fl.us. To view the Feb. 4 school board meeting, agenda and transcript, visit http://schoolboard.hcpswebcasts.com. For support materials concerning suggested school names and reasons for their nominations, visit https://tinyurl.com/v7xudys.