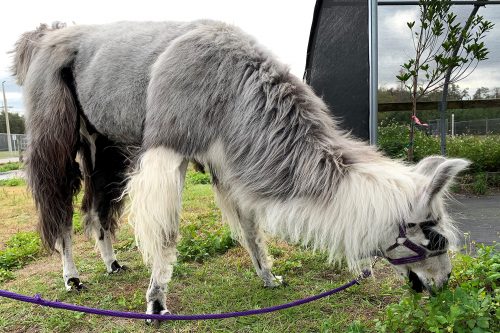 LOIS KINDLE PHOTOS
Tux is one of four llamas being cared for and trained for show by FFA students at Lennard High School. The animals were added to the school’s livestock program last October.

This time last year, when a group of Lennard High School FFA students saw other kids showing llamas at the Florida State Fair, they became quite interested in adding the animals to the Lennard FFA program.

One student, Bella Wehner, fell in love with the idea of caring for these shy, gentle creatures, and after only four short months of caring for a 14-year-old llama named Tux, she’s ready to show him Feb. 14 at this year’s fair. And, if she can raise $600 between now and March 20, she’ll be headed, by invitation, to show him again at the Hillbilly Llama Classic March 28 in Georgia. 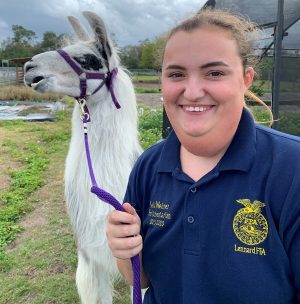 Lennard High School Senior Bella Wehner, 17, is shown here with Tux, the 14-year-old llama she has trained to show in the upcoming Florida State Fair. The FFA student needs to raise $600 to take Tux, by invitation, to the Hillbilly Llama Classic in Georgia at the end of next month.

“I hope the community will help her reach her goal,” she added. “It’s important to encourage our next generation to go into agriculture to keep it alive and thriving in the future.”

Wehner is a senior at Lennard, one of 700 Longhorn AG (agriculture) students and one of 120 in the FFA club. The 17-year-old, who’s also part of the school’s veterinary program, plans to become a large animal doctor.

She and three other students currently care for Lennard’s llama herd, which was leased from Casa de Llama in Inverness for free as long as the students show the animals competitively.

About a half dozen students have already expressed an interest in doing so next year, so the herd will need to be increased, said first-year AG teacher Lauren Van Dame.

While she was a teaching intern at Lennard last year, Van Dame encouraged those FFA students who were so excited about showing llamas to research the animals and keep learning about them. Then, when the former feed saleswoman became a full-time AG teacher at the school last fall, she pursued the idea of adding llamas to its livestock, which also includes ducks, chickens, cattle, dairy cows and swine.

“The kids found the breeder, and I arranged to have four llamas brought here,” Van Dame said.

Wehner enjoys being in FFA, where she’s learning about public speaking and career preparation.

“It’s based around agriculture and raising animals and plants,” she said. “I always liked both from a very young age.”

And she loves Tux.

“Llamas are cool and unique and not many schools have them,” Wehner said. “Tux has an ‘old’ personality. He likes to do things on his own terms. He’s really fun to work with, and I always enjoy seeing him and being with him.”

Werner’s persistence and patience are paying off.

The senior cares for him every morning and after school during the week and on weekends. She feeds the castrated male llama hay and pellets, washes and grooms him. She also trains him to go over (and under) obstacles and carry a pack during weekend hikes. Once a week, Tux and the other llamas are trailered and taken to a state park for enrichment.

Like other FFA students, she pays for his feed and any veterinary bills and medications, if needed.

If you’d like to help Wehner raise the $600 she needs to show Tux at the upcoming Hillbilly Llama Classic, mail a check made payable to Bella Wehner with ‘For Tux’ in the notation field and send it to Lennard High School, 2342 E. Shell Point Road, Ruskin, 33570. 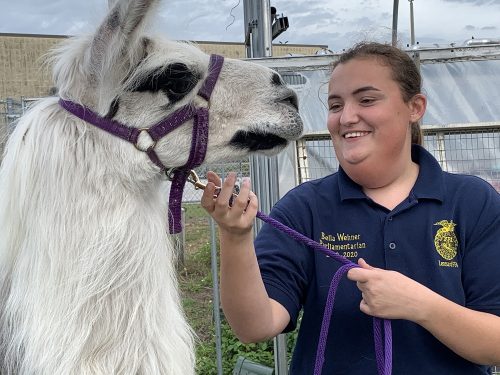